Ancestor of horses, rhinos may have originated in India 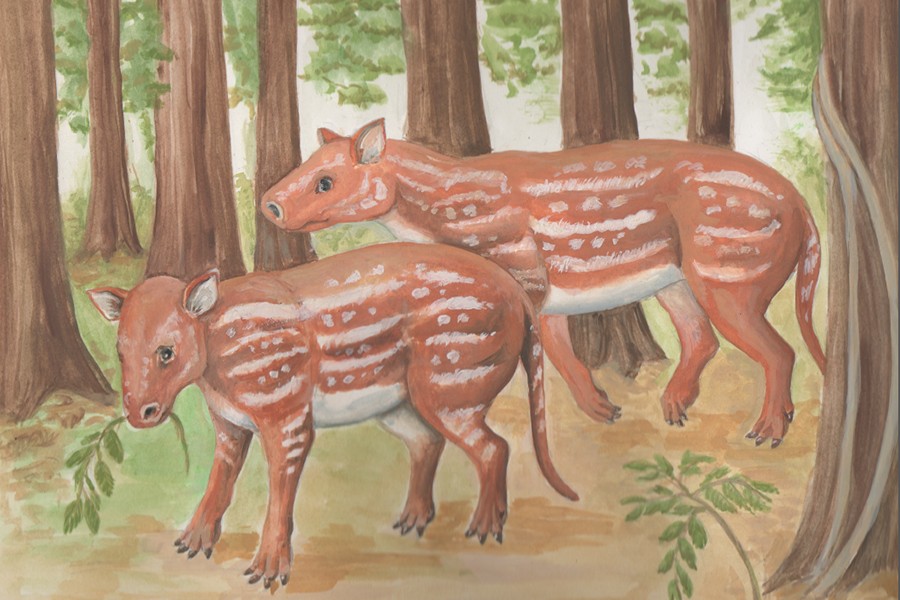 Working at the edge of a coal mine in India, a team of Johns Hopkins researchers and colleagues has filled in a major gap in science's understanding of the evolution of a group of animals that includes horses and rhinos. That group likely originated on the subcontinent when it was still an island headed swiftly for collision with Asia, the researchers reported recently in the online journal Nature Communications.

Modern horses, rhinos, and tapirs belong to a biological group, or order, called Perissodactyla. Also known as "odd-toed ungulates," animals in the order have, as their name implies, an uneven number of toes on their hind feet and a distinctive digestive system. Though paleontologists had found remains of Perissodactyla from as far back as the beginnings of the Eocene epoch, about 56 million years ago, their earlier evolution remained a mystery, says Ken Rose, a professor of functional anatomy and evolution at the Johns Hopkins School of Medicine.

Rose and his research team have for years been excavating mammal fossils in the Bighorn Basin of Wyoming, but in 2001 he and Indian colleagues began exploring Eocene sediments in Western India because it had been proposed that perissodactyls and some other mammal groups might have originated there. In an open-pit coal mine northeast of Mumbai, they uncovered a rich vein of ancient bones. Rose says he and his collaborators obtained funding from the National Geographic Society to send a research team to the mine site at Gujarat in the far western part of India for two weeks at a time once every year or two over the last decade.

The mine yielded what Rose says was a treasure trove of teeth and bones for the researchers to comb through back in their home laboratories. Of these, more than 200 fossils turned out to belong to an animal dubbed Cambaytherium thewissi, about which little had been known. The researchers dated the fossils to about 54.5 million years ago, making them slightly younger than the oldest known Perissodactyla remains, but, Rose says, the finding provides a window into what a common ancestor of all Perissodactyla would have looked like. "Many of Cambaytherium's features, like the teeth, the number of sacral vertebrae, and the bones of the hands and feet, are intermediate between Perissodactyla and more primitive animals," Rose says. "This is the closest thing we've found to a common ancestor of the Perissodactyla order."

Cambaytherium and other finds from the Gujarat coal mine also provide tantalizing clues about India's separation from Madagascar, lonely migration, and eventual collision with the continent of Asia as the Earth's plates shifted, Rose says. In 1990, two researchers, David Krause and Mary Maas of Stony Brook University, published a paper suggesting that several groups of mammals that appear at the beginning of the Eocene, including primates and odd- and even-toed ungulates, might have evolved in India while it was isolated. Cambaytherium is the first concrete evidence to support that idea, Rose says. But, he adds, "it's not a simple story."

"Around Cambaytherium's time, we think India was an island, but it also had primates and a rodent similar to those living in Europe at the time," he says. "One possible explanation is that India passed close by the Arabian Peninsula or the Horn of Africa, and there was a land bridge that allowed the animals to migrate. But Cambaytherium is unique and suggests that India was indeed isolated for a while."

Rose says his team was "very fortunate that we discovered the site and that the mining company allowed us to work there," although, he adds, "it was frustrating to know that countless fossils were being chewed up by heavy mining equipment." When coal extraction was finished, the miners covered the site, he says. His team has now found other mines in the area to continue digging.

Other authors on the study from Johns Hopkins were Katrina E. Jones and Heather E. Ahrens.