A quick look at how Johns Hopkins is getting greener 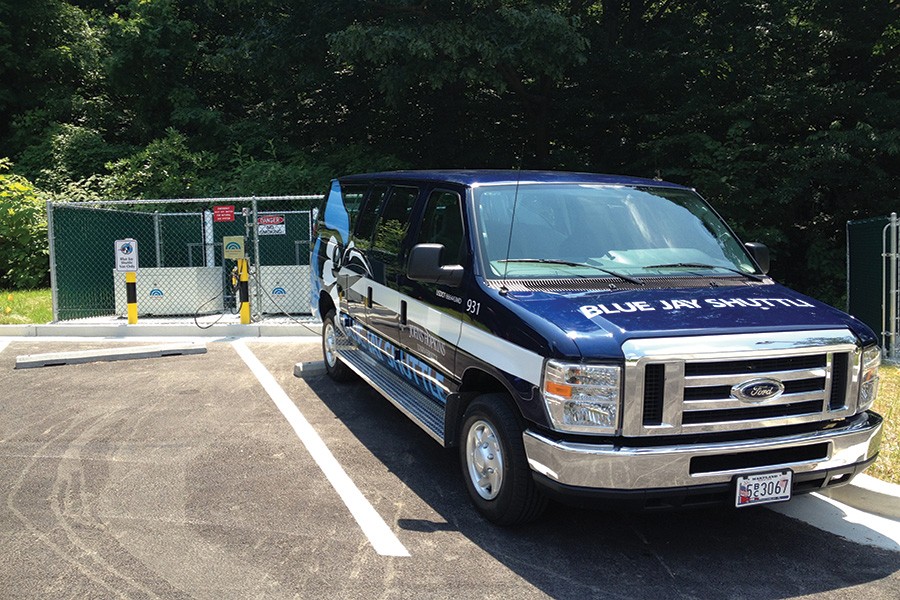 Image caption: That shiny chrome grill on a Blue Jay shuttle is a visual clue.

Since its 2006 launch, JHU's Sustainability Network has grown to be a universitywide commitment embracing everything from waste and water to food, transportation, energy and climate change, buildings and infrastructure—and, of course, academics and research.

"Sustainability touches every facet of the community here," says Ashley Pennington, senior program coordinator for the JHU Office of Sustainability. "I want everyone to get involved."

Through a broad constellation of efforts, Pennington says, the university has been able to reduce its greenhouse gas emissions by 456,000 metric tons, which is about 30% less than its emissions in 2008, all while increasing gross square footage by 8.5%—more than anticipated when goals were set. But with statistics like that, she says, the progress toward cutting our emissions in half by 2025 is promising.

"As far as we're concerned, sustainability is public health," Pennington says. "We're part of the global system that our students aim to improve, so it's imperative we address our own impacts."

$40 MILLION in estimated utility savings over the last four years

Heeding the call to make their workplaces more sustainable, 60 faculty and staff members have forged 10 Green Teams on the Homewood, Keswick, Mount Washington, and East Baltimore campuses to encourage others to be better stewards of energy and natural resources.

Sorry, dumpsters and landfills. Since last summer, about 1,200 items of furniture no longer needed by some offices have been reused by others, 650-plus pieces have gone to nonprofits, and more than 37,000 pounds have been recycled.

That shiny chrome grill on a Blue Jay shuttle is a visual clue: It's one of the four compressed natural gas∑powered vehicles in the university's fleet of vans. According to the U.S. Department of Energy, CNG produces fewer emissions than the average gas-powered vehicle, and no evaporative emissions. Two more CNG shuttles will be added this year.

More than 100 water fountains at Homewood (with plans to expand) have been replaced or retrofitted so that they're now bottle-filling stations. Take Back the Tapﬂa coalition of students, researchers, and staffﬂis leading the charge to make reuse the new norm.

Following a mantra to "Reduce, Reuse, and Recycle" cardboard, paper, glass bottles, food, and other items, Johns Hopkins in 2013 had a waste diversion rate of 45%ﬂ10% beyond its goal. The School of Medicine has made the biggest leap: from 21% in FY10 to 67% in FY13.