By Latarsha Gatlin and Vanessa McMains

Robert J. Johnston and Andrew J. Holland, both assistant professors at Johns Hopkins University, have been named Pew Scholars for their promising work in the area of health sciences. 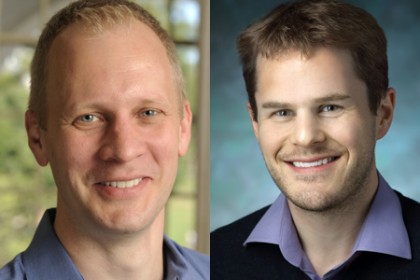 Johnston, a biologist in the Krieger School of Arts and Sciences who studies how cells randomly choose their fates during development, was selected for the 2014 Pew Scholars Program in the Biomedical Sciences. He is one of 22 biomedical scientists to receive this year's award.

Holland is a molecular biologist in the School of Medicine, with a secondary appointment in Oncology in the school's Cancer Biology program, whose work focuses on how dividing cells create the correct number of centrosomes. He is one of five named to the inaugural class of Pew-Stewart Scholars for Cancer Research.

Each award from the Pew Charitable Trusts comes with a grant of $60,000 per year for four years.

"It's a great honor to join the ranks of the esteemed Pew Scholars," Johnston says. "I greatly look forward to interacting with them in the scien­tific community."

Johnston's lab uses the fruit fly eye as a model to show how cells make random choices, much like flipping a coin, to decide what type of cell they will become and what types of functions they will carry out. These random choices are important for the development of neurons, immune cells, and stem cells. Johnston's findings will have implications for our understanding of vision disorders, autism, immunodeficiencies, and lymphoma.

Johnston says that the Pew award will allow his lab to use new technology, such as next-generation sequencing and high-resolution microscopy, to determine the molecular mechanisms controlling random cell-fate choices.

Beverly Wendland, a professor and chair of the Department of Biology, says that Johnston's research adds a new dimension to the department and complements the exciting research already taking place among the faculty. His award checks off another benchmark that is vital for the success of an early career scientist, she says.

"An award like this both recognizes his strong track record of accomplishments and endorses the independent directions he plans to take," says Wendland, who is also interim dean of the Krieger School. "Flexible funds from these kinds of awards provide important seed money that allows a new investigator to invest in sometimes risky projects that have the potential for high payoff. We are excited to see what Bob's research program looks like 10 years from now."

"Being selected for this award is a great honor," Holland says. "It will allow us to explore a bold new research direction for our lab, as well as enable us to bring some important new ideas and technology to fruition."

Holland's lab is designing a mouse model that will allow scientists to control the number of centrosomes in cells so that he can further study what happens when chromosome distribution goes awry. His work could lead to the development of novel therapies for the treatment of cancers.

Carol Greider, director of the Department of Molecular Biology and Genetics at the School of Medicine, and a Pew fellow herself, praises Holland's selection as a member of the new class of scholars.

"Andrew Holland has chosen to study one of the most important unsolved questions in cell biology," Greider says. "The intersection of centrosome duplication, aneuploidy, and cancer will bring new insights into basic processes and their clinical consequences."

The Pew-Stewart Scholars for Cancer Research program is a joint effort between Pew Charitable Trusts and the Alexander and Margaret Stewart Trust. The partnership is part of a national initiative to support promising early career scientists whose research may accelerate discovery and advance progress in a cure for cancer.