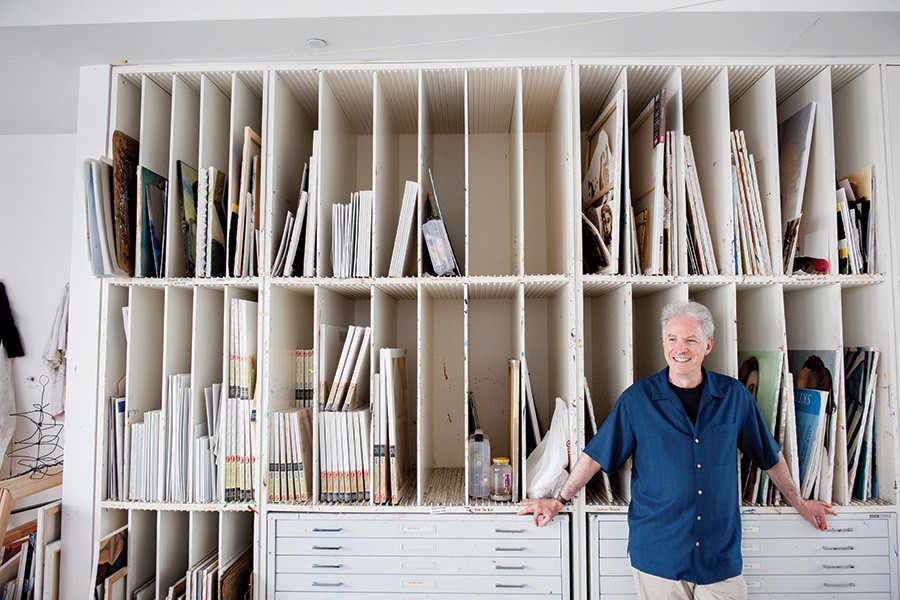 Craig Hankin remembers the first studio arts classes he took at Johns Hopkins. It was during his junior year, in fall 1974. He and three or four other students who "mucked around with drawing and painting," as he says, would go to the ground floor of Merryman Hall, which was located where Hodson Hall is today. The studio was an L-shaped, roughly 600-square-foot room with a few windows. The classes were led by Eugene "Bud" Leake, a painter who, after retiring as president of the Maryland Institute College of Art, had just become Johns Hopkins' first artist-in-residence.

"I was hooked on making art immediately," Hankin says of Leake and the class. "It was one afternoon a week, an open studio where anybody could come. There was a model, and you could draw or paint—very loose, very free-form. There were a few of us undergrads, but a few grad students showed up, and a couple of faculty wives, too. There were also some administration people who dropped in now and then. It started around lunchtime, so you'd get people coming in on their lunch hour."

Today Hankin is the director of Homewood Art Workshops, the studio arts program that began offering a visual arts minor through the Krieger School last year. The workshops celebrate their 40th anniversary this fall, marking the occasion on Sept. 20 with a community Plein Air Paint Out and an announcement of a name change to the Center for Visual Arts. The workshops have grown from that once-a-week open studio led by a single artist to, four decades later, a thriving program with eight artist instructors offering a variety of studio classes. Hankin began teaching in the program in 1980, becoming the director in 1986, and says that the program's continued growth has been driven entirely by student interest.

Hankin wasn't sure he wanted to be an artist when he enrolled at Johns Hopkins in 1972. "In high school I was just clueless and passive enough to think I could go to Hopkins and try to be a doctor, despite the fact that I was terrible in math and sciences and never had any aptitude or interest in those subjects," he says with a laugh. "I came here as a premed major, which lasted about to the middle of that first semester freshman year, when I was flunking both chemistry and calculus." He switched his major to art history—but he longed to be making art, not just looking at it.

The university didn't have drawing or painting classes in his first two years here. And there were no photography, cartooning, sculpture, or other visual arts classes, as there are now. There was no Program in Film and Media Studies, no Program in Museums and Society, no artist-in-residence through the Center for Advanced Media Studies. There were no Peabody at Homewood courses, nor a Hopkins Symphony Orchestra. Until the creation of the Homewood Art Workshops in 1974, a student interested in arts practice had only one option: taking classes at MICA.

By his junior year Hankin had already taken his first evening class at MICA, and the arrival of Leake at Johns Hopkins energized and inspired him. "He was the most dynamic, fantastic guy I ever met," Hankin says. "My first two years here I felt really isolated, and I didn't have much work to show him, but I had some drawings. He was really encouraging. It was totally what I wanted to be doing."

Over the years, many other undergraduates wanted to be in the studio, too. The arts classes, being small, have always had a significant wait list, and following the announcement of the visual arts minor, those numbers spiked. "In the spring semester, the wait list was close to three times what it was in the fall semester," Hankin says. The creation of the minor, he points out, was largely due to the advocacy work of Rachel Riegelhaupt, a Class of 2015 undergrad who, when she arrived at Homewood, petitioned university administration to create it.

"I can only chalk up the interest in taking visual arts classes to the publicity that the minor got," he says. "It's too huge a number to be completely random. I think it's made a big difference both in raising our profile and giving us academic legitimacy and credibility.

"Academically, problem solving in the arts is very complementary to other types of problem solving in the sciences," Hankin says. "It teaches different ways to look at a problem. And what I'm always intrigued by is that these kids are so bright and creative on their own that they find applications for what we learn here in their other courses."

Sofia Arruda, a Class of 2015 Romance languages and psychology major, added the minor to her degree program this past year. The minor, which wasn't offered when she applied to Hopkins, "definitely would have attracted me more because I made it a point to continue doing art," says Arruda, who spent her summer working in Baltimore with a PhD candidate from the School of Nursing doing research with patients suffering from heart failure. Arruda had started taking art classes as a kid and continued all through high school, and says that "it would have felt weird if I wasn't going to keep doing something creative at college. Painting and drawing are very intellectual processes, a whole different way of thinking and understanding."

Recent graduate Liz Skerritt, a physics major and one of the first graduating visual arts minors, says she sees similarities between drawing and doing physics problems. Skerritt, who had come to the university knowing the strength of its arts program—her older sister had taken classes with Hankin as an undergraduate, and she had sat in on one as a high school student—says she feels that her arts training helped her in her other classes.

"Visualizing models is important in physics, and I felt like having an artistic side definitely helped with that," Skerritt writes in an email, adding that when she starts her position at the university's Applied Physics Laboratory at the end of summer, "I will be supplementing my computer modeling and simulations with visual elements. My dream job would be where I can blend both the sciences and the arts, so this might be it."

For Hankin, the creation of the minor is the latest in a long, slow evolution of the university's recognizing the importance of the arts in undergraduate education. When he first took classes, in 1974, they were offered as noncredit courses, and when Leake hired Hankin in 1980 to teach drawing once a week, one studio class had grown to three, with Leake handling the other two. Shortly after Hankin's arrival, Leake and he talked to the dean of students about making the courses one credit. Hankin, knowing firsthand how demanding Hopkins semesters can be, understood that students needed something on their transcript to account for the time they put into the work; without their receiving credit, class sizes would halve by semester's end.

Leake became Hankin's mentor over the next few years, and Hankin's first book, Maryland Landscapes of Eugene Leake, was published by the Johns Hopkins University Press in 1986. When Leake retired that year, Hankin became the workshops' director, and the studio was moved to the windowless basement of Merryman Hall. It wasn't an ideal situation—"It was like trying to talk about light and color in a submarine," Hankin jokes—but student demand was so strong that Hankin hired painter Helen Glazer and sculptor Gagik Aroutiunian to help him teach up to five classes a week.

Soon, however, one of his students would help him bring some natural light into the bunker. In 1990, William C. Richardson became president of the university, and Hankin made a point to introduce himself, tell him about the workshops, and develop a relationship with him. Turned out, Richardson had always wanted to learn how to draw. Could Hankin teach him?

Of course I can, Hankin recalls saying, adding that Richardson managed to clear a few afternoons in his schedule that summer for drawing in the basement studio. One day while they were down there, one of the building's old overhead fluorescent light fixtures exploded.

Richardson raised some funds to allow Hankin to install a window to permit some natural light into the studio, and Hankin says that Richardson was one of the early, and few, champions of the workshops.

Over the years, Hankin and the program found more allies around campus, including Michael Fried, of History of Art and the Humanities Center; Richard Macksey, in the Humanities Center; M. Gordon "Reds" Wolman, of the Department of Geography and Environmental Engineering; Jerry Christiansen, of the Department of English and founder of the Film and Media Studies Program; Daniel Weiss and Katherine Newman, deans of the Krieger School; and Stephen Campbell and Felipe Pereda, both in History of Art.

Hankin runs through the names of these people to spotlight that interest and support for the arts come from all around, just as his students do.

In 2014 the workshops offered 33 classes, serving 301 students, with 323 names on wait lists. "We get kids from every single discipline at the university, but they all need to do this, and that's a recent development for us," Hankin says. "After we moved into the Mattin Center in 2001, we started to see something really interesting happen, and that was the appearance of kids who suddenly had portfolios of work to show us. We never had that at Hopkins before."

These were students who were majoring in rigorous disciplines such as premed or engineering, but they had taken Advanced Placement art in high school; being involved in some creative outlet was part of their identity. "They have always been kids who have done art, whether they're singing in an a cappella group or spending hours working on dance routines or rehearsing for theater performances. They've always done something creative. And our students feel really bad if they don't get to be in a studio making art."

The arts interests of faculty and students have blossomed over the past 15 years, and though there's no causal relationship between the Homewood Art Workshops and the new activities, Hankin mentions many of them to highlight growing recognition of the vital role that the arts have at a research institution: the launches of the Undergraduate Program in Theatre Arts and Studies, and the interdisciplinary Museums and Society Program and the Center for Advanced Media Studies, each of which has forged collaborations with departments in the university and with local museums, arts institutions, and artists; and the ongoing growth of the Program in Film and Media Studies, which includes partnerships with MICA and the Maryland Film Festival in the revitalization of the Parkway and Centre theaters in the Station North Arts District, where recent hire Thomas Dolby, the first Homewood Professor of the Arts, will have his office when the Centre Theatre opens in 2015.

Hankin says he remembers when he felt like all the people interested in the arts at Homewood could barely fill a small classroom. Now students and artists come here to study and work with faculty recognized for their scholarship, creativity, and vision of how arts complement and expand their intellectual endeavors.

"Over the years, I've been put on the spot to justify the Homewood Art Workshops' existence and explain why what we do here matters," he says. "It's like trying to tell a stranger about rock 'n' roll—if I have to explain this to you, are you ever really going to get it? But slowly, but slowly, as John Lennon once said, the point seems to have gotten across. And, you know, there is less resistance to the arts these days. From my little corner of this world, now is the best time at Hopkins, for us and for the arts in general. I just hope we can continue the arts momentum we've generated over the past decade."