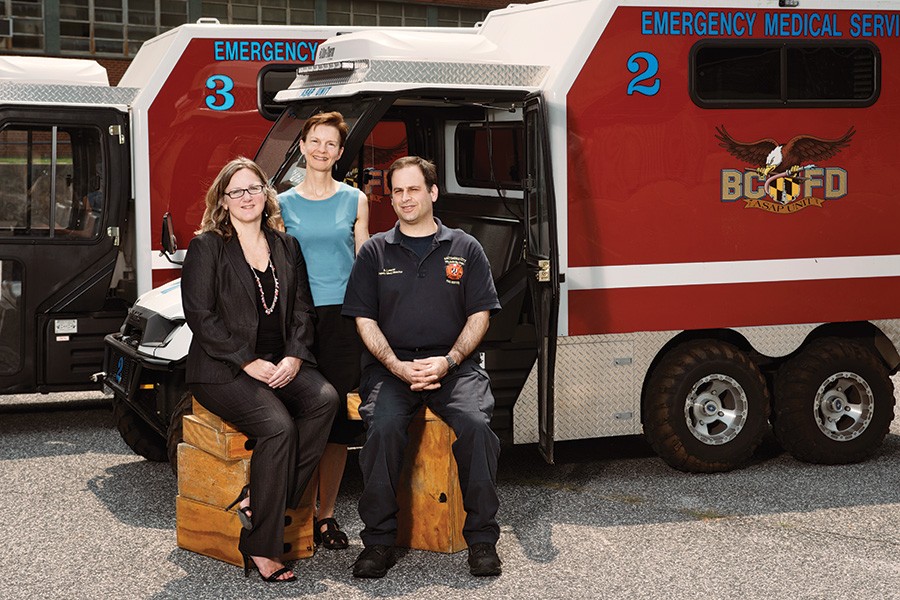 EMS Capt. Jonathan Brooks says the nature of most substance use–related responses varies little. Just swap a detail here or there, and the drug of choice. A bystander or friend phones 911 to report a person unconscious or otherwise unresponsive on a sidewalk, in an alley, or slumped in a stairwell. In such dark moments, one can't afford the luxury of dignity.

Brooks, a 14-year veteran of the Baltimore City Fire Department's Emergency Medical Services Division, says that by the time paramedics arrive, the scene often has been "sanitized," meaning an acquaintance of the victim has thrown away any physical evidence of the root transgression, such as spoons, cotton balls, or other "tools" in the case of a heroin user. Not in a position to judge, the paramedics will perform a routine assessment to check the patient's airways and vitals, and address any acute conditions. If there's evidence of respiratory distress, the paramedics will administer Naloxone to counter the effects of what is likely an opiate overdose. Once stabilized and alert, the individual is taken to a nearby hospital emergency room, where, within hours, he usually gets released.

But the story seldom ends there. A week, a day, or even hours later, the most severely addicted typically wind up back on the street to prompt another 911 call and ER visit.

Brooks knows intimately the impact of substance use on the health of Baltimore, unflatteringly known as one of the opiate abuse capitals of the world. Anecdotally, 40 to 60 percent of the 911 calls (more than 150,000 annually) to which Baltimore EMS responds are related to drugs or alcohol. The number balloons to nearly two-thirds when you refer to frequent users of EMS, which is the most trusted and visible source of acute health care for many in the city.

"We see many people again and again. I get to know their full name, date of birth, Social Security number—and I don't have a great memory," Brooks says. "They recirculate in the system indefinitely, or until that time we find them dead. The hallmark of our ability as first responders is to treat people and then deliver them to the appropriate care, but with this population of people, we are missing the mark."

Frustrated by the status quo, Brooks and others on the frontline of care want to slow down the substance abuse merry-go-round and, with a bit of luck, save some lives along the way. A plan to accomplish just that has been set in motion.

Earlier this year, the Baltimore City Fire Department, in conjunction with the Johns Hopkins Bloomberg School of Public Health and the Behavioral Health System Baltimore, launched a pilot study called Ladder (Linkage to Addiction Recovery through Emergency Response) to train BCFD paramedics to better engage with the thousands of people with substance use disorders—many of them homeless or disenfranchised—whom they encounter, and link them to appropriate community resources to aid their path to recovery.

The program, set to begin this fall, will involve paramedics from the Johns Hopkins Hospital catchment area and beyond. The cohort will undergo a training session at the Baltimore City Public Safety Training Facility near Pimlico Race Course to complement their existing knowledge of substance abuse issues. Paramedic participants will learn about recovery success stories, evidence to counter the negative perception of substance abuse, principles of addiction science, and how to better communicate and engage with a person caught in the grips of addiction.

"EMS likes to think we understand addiction, but we don't have a really good handle on who suffers from abuse-related problems," says Ben Lawner, the deputy EMS medical director of the Baltimore City Fire Department and an assistant professor of emergency medicine at the University of Maryland's School of Medicine. "Why are drugs so addicting? What therapies are keeping people from using drugs in the first place? And how can we take better care of our patients? This is what we want our people to learn, and then how to deliver interventions to better assist them. To be honest, in EMS we typically see the worst of the worst."

The paramedics will learn a screening and referral protocol to more accurately identify those with substance use disorders and deliver patient-centered, motivational messages. Participants will role-play scenarios, such as confronting an inebriated person who might resist further medical attention or not admit the extent of his alcohol use. "We'll try to make it interesting and interactive and see how this scene would play out in real life," Lawner says.

The program is an academic-interagency collaboration, developed in cooperation with the city's Fire and Health departments, Behavioral Health Services Baltimore, HealthCare Access Maryland, and Johns Hopkins research experts. Amy Knowlton, an associate professor in the Bloomberg School's Department of Health, Behavior and Society, is the study's principal investigator.

Knowlton says that the goal is to recruit 300 people identified by Ladder-trained paramedics as having substance-use disorders. Patients will be referred to the Lighthouse Studies at Peer Point, a community-based research center within the Bloomberg School's Department of Health, Behavior and Society. The center's mission is to conduct research that focuses on health promotion and disease prevention, with special emphasis on disadvantaged urban populations.

The program, Knowlton says, will not affect usual care. Only when patients are stable and awake and have screened positive for substance use will they be handed a card for the Lighthouse and invited to the study. At the Lighthouse, the patient participants will receive brief counseling services and assistance in addressing motivational and system-level structural barriers to entering addictions treatment. Staff will follow up with patients 30 days later to reassess them and determine the effectiveness of the program.

Based on 2012 data from the National Survey on Drug Use and Health, an estimated 8.9 percent of Baltimore City residents ages 12 or older can be categorized as having alcohol or illicit drug dependence or abuse issues. Knowlton, who since 2008 has conducted extensive research on substance-using EMS cases in Baltimore in cooperation with the Fire Department, says that her findings have shown that different strategies are needed to better engage this population and to link them to existing community services.

"These people tend to use hospital services frequently and have high morbidity and mortality rates," she says. "I wanted to look into how we could better serve this population, who are often caught in a revolving door, being shuttled by EMS or police between emergency departments and jail."

Lawner says that many stakeholders—hospital, fire department, police, and health officials—understand the ineffectiveness and costs of the current system. The average cost of an ER visit is $1,354, and EMS responds to 300 to 400 calls a day, with easily dozens related to substance use. According to Healthy Baltimore 2015 statistics, nearly 7 percent of ER visits were drug-related.

"If somebody has an overdose-related event and they are stable, they go to the hospital, where the emergency departments are overcrowded. And then we discharge these people without resources. So EMS is overtaxed. EDs are overcrowded. And the patients don't get hooked up to the proper resources," he says. "You have a system that on the surface works because we respond to the patient and treat the patient, but we don't really treat the underlying disease. That is a major issue. I feel that EMS is well-positioned to deal with this population. This very interesting study essentially uses our paramedics as frontline clinicians."

By educating paramedics to better spot substance use, Lawner says the program can widen the net and connect with resources people who otherwise would slip through the system.

Lawner says his expectations of the program are modest but optimistic. In the face of what he calls a public health epidemic, inaction is not an option.

"We are really trying to see if this is feasible, if we can show that EMS is well-positioned to do this, that we can link people to treatment. And maybe the outcomes are decreased ED visits for substance abuse–related complaints and decreased utilization of emergency medical services. Ideally, a successful linkage to addiction treatment actually contributes to overdose prevention. If the study shows that, ideally we can deploy it on a larger scale," he says. "The idea is a more proactive approach to the emergency management of overdoses. You prevent some people, if only a few, from a life-threatening overdose. You also set up a more appropriate use of the health care system. If you engage them at the moment of crisis and actively follow up, you have a much better chance of perhaps linking them to somewhere they can get helped. Nobody would tell you our current system is the answer. We just transfer people to the ER. It's ridiculous."

If nothing else, Lawner says, this intervention might help raise awareness of substance use issues and begin a discussion about how the health care system could better care for patients with such disorders, just as it does those who have suffered a stroke or have a chronic disease.

Knowlton says that another piece of the city's crisis response system for persons with substance use disorders should be a stabilization center, where medically stable intoxicated persons can voluntarily receive "standard of care" for sobering up, in addition to food, clothes, showering facilities, and referral to other resources. "Hospital ERs are often not able to provide appropriate services for these people," she says.

Under the plan for such a stabilization center, which Knowlton helped draft, BHS Baltimore would oversee the implementation of the center and monitor its operation. Currently, the agency is working on identifying funding sources and a location for the facility. Crista M. Taylor, vice president for system development for BHS Baltimore, says that her organization has already received support from Maryland Del. Peter A. Hammen, chair of the House Health and Government Operations Committee, who is optimistic that it can facilitate getting the center up and running within two years.

"Right now we are in the beginning stages, trying to put the pieces together," Taylor says. "We've talked about Baltimore having such a center for a very long time, so it's really exciting to be getting so close to making this a reality. Right now there is a lot of momentum to make this happen. A lot of forces have come together at the same time, and hospitals certainly see the need to address the issue of unnecessary repeat users in their ERs."

Taylor and Knowlton say that the gold standard for such a facility is perhaps the San Francisco Sobering Center, which opened in 2003 to focus on that city's large homeless alcohol-dependent population. Now co-located with the city's Medical Respite Program, this nurse-run facility accepts clients from ambulances, police, emergency departments, and various outreach services.

Shannon Smith-Bernardin, the center's deputy director, says that patients typically stay at the facility from four to eight hours, receive oral fluids and food, and have a bed to lie down on. Since its opening, the center has had more than 40,000 check-ins, a significant number of whom are repeats.

In terms of cost benefits, roughly 65 percent of the people treated by the San Francisco center would have gone to an ED, Smith-Bernardin says. "We like to think we've made an impact on ER overcrowding, but more importantly, we are helping to keep people alive day to day," she says. "Before the center was opened, we had a number of people dying outside on the streets, 70 percent of whom were intoxicated."

The systemic issue in Baltimore, Brooks says, is that people are not being linked to the proper resources to receive help.

"When substance abusers leave the ER without the underlying issues addressed, it's often a game of Russian roulette. It's just a matter of time before they lose," he says. "Nobody wants to be addicted to heroin or be an alcoholic. These things happen slowly, and their humanity is eroded over time."

Brooks wants to intervene before that happens.