By Interview by Mat Edelson

If it moves and can crash, Susan Baker has studied it. Helicopters, hot air balloons, jets, motorcycles, military Humvees, cars, trucks, skis … all have come under her scrutiny. So, too, have numerous other causes of injuries, including house fires, carbon monoxide poisoning, alcohol abuse, nursing home falls, and drowning. The founder, in 1987, of the Bloomberg School's Center for Injury Research and Policy, Baker has received many honors for her work, including the American Trauma Society's Distinguished Achievement Award, Columbia University's Frank A. Calderone Prize (considered the pre-eminent award of the public health world), and induction into the Maryland Women's Hall of Fame 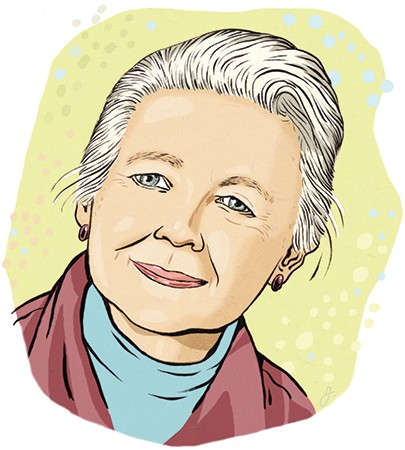 I always did a lot of different things in my career. My mother used to say, "Sue, when are you going to be finished?" [laughs]. But when I think of Mother, I think of her saying, "My shoulders are broad," meaning she could always take on one more thing, and she did; she did loads of projects for the community. She was a great role model.

My father, when I think of special things, I think of him letting me help in his workshop, where I figured out how things worked. I'd work with tools, create stuff, without worrying that I'd make a mess. It stood me in good stead. My first mentor at Hopkins was Curt Richter. Dr. Richter was the epitome of having ideas and barging forward. He'd work with great enthusiasm and encouraged me to strike out on my own. He was away one summer, and I got an idea for something I wanted to find out about. I designed something I could put eight rats into, keep them there, and measure their urine output to figure out how their kidneys were responding to a type of poison we were studying.

When Dr. Richter came back, he said, "That's terrific. Write it up." He taught me to shoot for the moon. I was considering sending the paper to some minor journal sure to publish it. He said, "No, always send something to the journal where you'd really like to see it published." So I sent it off to the American Journal of Physiology, and it was published. Dr. Richter wouldn't even let me put his name on it. And there I was, 23 years old and proud as punch. Fifteen years later [after raising her family], when I was doing research on injuries, I sent my first paper to The New England Journal of Medicine, and it was published! And I sent my second paper to JAMA, and that was accepted, too! Now, I haven't been able to do that my whole career, but I learned to strike out for the things you really would like to see happen, even if it seems unlikely, because some of them will work out.

I'm not sure if I ever pieced together how I got into injury research. When I first went back for my master's in public health at Hopkins, my professor, Dr. Abe Lilienfeld, said to write a paper on something of interest. Here I had this great chance to take a block of time and work on something that's of real interest to me, and I couldn't decide what to do. I thought of different chronic diseases, pancreatic cancer, lung diseases, but nothing really turned me on. I said to my husband, "Tim, I feel like an accident looking for a place to happen." And he said, "How 'bout writing about accidents and chronic diseases?"

Time and again, Tim [Baker, a renowned international health specialist who co-founded at Johns Hopkins the world's first academic department of international health] would have an idea that would get me going, encourage me—even when I wanted to learn how to fly for research I was doing on plane crashes. We didn't compete with each other; we admired and gloried in one another's successes. We gave mutual encouragement, the stuff of which dinner table conversations could be made if there weren't children sitting there being bored.

I learned I don't like the word "accident." [Former head of the Insurance Institute for Highway Safety] Bill Haddon, a mentor who was a huge influence in my professional life, was the first person to make a big deal over use of the word "accident." It suggests something not preventable when perhaps it is something that can be explained and prevented. I think of the minister who was electrocuted standing in water while holding onto a microphone. You could figure that was going to happen sooner or later to someone standing in water using a microphone; the fact that it wasn't intentional didn't mean you could say, Oh, that was just an accident. In fact, a news article called it a "freak accident." There's dismissiveness there. If little Johnny propels his toddler walker across the room and knocks a glass off the table, it's, "That's OK, Johnny, it was just an accident, you weren't trying to do it." But when you look at what went into that event, why did anyone design toddler walkers with wheels that would put water glasses and everything else within reach of 2-year-olds?

Usually, when an injury occurs, responsibility can lie with a designer, planner, inventor, lawmaker … someone whose decision caused something to happen one way or another. I looked at the chain of events that led to the injury and how you could interrupt that chain. I looked for the weakest link and saw what you could do about that.

You could always find data if you were willing to look. On several occasions I got into a car to look at a road where there had been a number of crashes, and, by gosh, you would see something. A curve on a downhill slope with a tree straight ahead if you don't make the curve—that's a place that needs a guardrail. One day I went out to the scene of a number of rear-end crashes between trucks and cars, mainly on big highways, in Maryland. The police reports at the time didn't indicate whether vehicles in the crashes were going uphill or downhill. You found that when the vehicle in the rear was a truck, it was a downhill crash. This sounds like a no-brainer—that trucks on downgrades where they needed to stop or slow down, they needed to have braking capacity consistent with the loads they were carrying to compensate for their momentum.

I was also doing research on injuries in the Baltimore medical examiner's office. Here was this gold mine of data that nobody had been using. There was a logbook in which every case was written down. I could look up cases with any particular cause of death, age group, whatever, dig them out of the files and sit there and read what the M.E. had written up on each case. Much of my success was due to this access to information and to the medical examiners that encouraged me, answered my questions, and collaborated on papers. The M.E.s were so pleased to have the results of their work—their autopsy write-ups and other information—not just revealed but organized to get the juice out of it. Many times, when I'd call other offices that had data, someone would say, "You know, I've been collecting this data for 25 years, and that's the first time anyone's asked me a question about it." They were glad to see use made of their data; it was validating their work.

I remember a professor from Minnesota who said, "You say the most outrageous things, and then you back them up with data and they're true!" I enjoyed the fact that you could get good data to make a point. I published not to get promoted but because we needed to do something with the information. Some people in public health used to think in the '70s that if you're "pure," you just do research and let someone else figure out what to do with that research. I disagreed with that and still do. I'm an advocate for changing policies and practices and laws and regulations in such a way as to make something safer.

The important thing is making sure the research is used, and now there's much interest in the public health world in seeing that good data are used to influence the right kind of policy. Sometimes the media, who I enjoyed working with, wanted a sob story or personal story, but they also wanted good data. That, and a few catch phrases. If you say a situation is outrageous, a reporter is more likely to be interested in your research than if you just drone along. Likewise, with talking to legislators, it's a matter of putting numbers in terms they can relate to. Saying that there's a death rate due to car crashes of "X teenage boys per 100,000" … well, I can't visualize 100,000 boys. But I can visualize and talk about a high school class of, say, 400 that would have had three more boys in it if they hadn't been killed in crashes.

I didn't see myself as a pioneer; I was just following up on stuff that seemed both fascinating and important. I felt lucky. Think back: You'd think in the late '60s people would have been saying, Look at the number of injury deaths—what are we going to do about studying them? Now, it's easy for people to say something is too tough, let somebody else do it, or perhaps say that seems important, but if it were really important, other people would already be doing it. It just so happened that I was the one that took action. I guess there's a certain boldness I had; people have commented that I wasn't afraid to take on a task or challenge a person while still being polite. I'm somewhat too modest to think of myself as an expert or role model. That appellation and the quote "job" of role model sort of falls upon one as a reflection of the caliber of your work and your thinking and your ability to influence other people.

As for being a woman in a man's field, it turned out to be beneficial. Remember, in the '70s, society was beginning to correct tremendous gender imbalances. Suddenly, any major committee had to have women on it. When they were looking for a person for the president to appoint to the National Highway Safety Advisory committee, well, there weren't many other women doing work in highway safety. So being a woman was an advantage. And, of course, there were funny things. I went to the first meeting of the American Trauma Society in Philadelphia not knowing a soul. At the first intermission I walked over to introduce myself to a few of the 200 men there and said, "How do you do. I'm Sue Baker from Johns Hopkins." And they said, "How do you do. Where is your husband?" I guess I could have sat around and said, Oh, I wish I were a man, but I never did. I had too much fun being a woman. At 84, the work is still fun; it's what keeps me going [she's been an author on more than 60 papers over the last decade]. "Upward and onward" is my motto. That's who I am.

Susan Baker is considered one of America's foremost epidemiologists specializing in injury prevention, having pioneered the field in the late 1960s. Her research is credited with numerous public policy changes and with saving thousands of lives; most notably, her investigations into infant mortality in car crashes helped convince legislatures across the U.S. to require the installation of child safety seats. She's also created numerous tools and resources for assessing injuries, including the Injury Severity Score used by trauma surgeons, and was an author or editor of three seminal publications: The Injury Fact Book, Injury in America, and Injury Research: Theories, Methods and Approaches.