The ice hockey team you didn't know Johns Hopkins had

Blue Jays' players stick with it, late nights and all 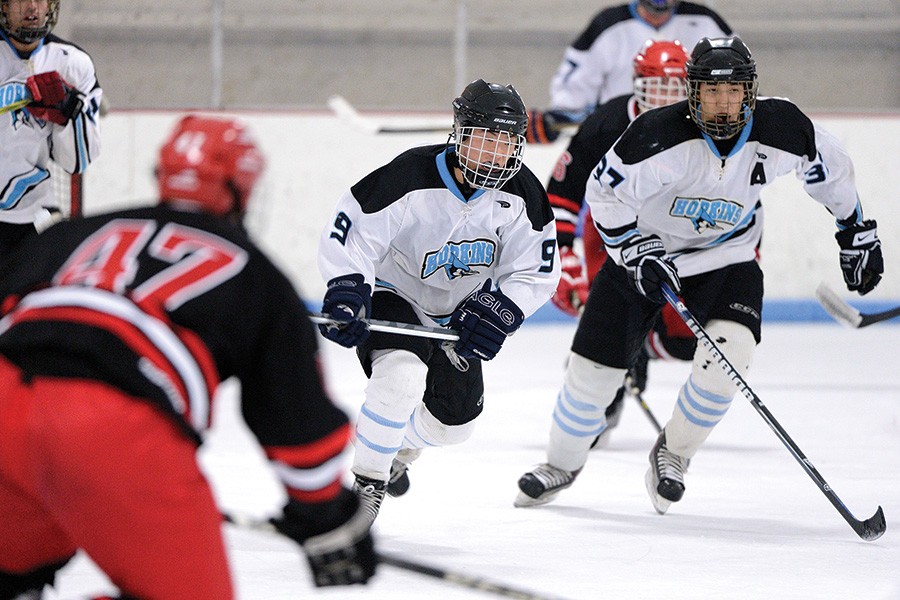 Just moments after the hockey moms and youth bantam league players shuffled out of Baltimore's Mount Pleasant Ice Arena late on a fall Monday night, 18 young men—and one woman—rushed onto freshly resurfaced ice dressed in full pads and helmets. After a quick skate around, barely enough time to elevate a pulse, they got down to some puck-smacking business.

Not surprisingly, the Mount Pleasant arena at 10 p.m. is a ghost town, save for this band of slapshot-loving undergrads and graduate students from Johns Hopkins. While many of their classmates studied or watched Monday Night Football, the members of the university's ice hockey club (yes, there really is one) carved out a precious hour to practice line-flow drills, zone defense coverage, and good old-fashioned forechecking for an upcoming game versus Shippensburg University at Hersheypark Arena in Pennsylvania. It would be a game only a few hundred would come to see, but that's a packed house when you consider that these games are marketed by word of mouth, and fans and players often carpool to get there.

Welcome to the not-so-glamorous world of Division III club hockey.

Befitting its shadowy existence, the Johns Hopkins ice hockey club squeezes in two practices a week, Mondays and Thursdays from either 9:30 to 10:30 p.m. or 10 to 11 p.m. Not ideal, but when you're a club team, you learn to make do. "The ice time was the cheapest we could [find]," says Hesam Motlagh, the team's captain, president, and right-winger. "We take what we can get."

Motlagh, a doctoral student in molecular biophysics, is now in his fifth year with Johns Hopkins ice hockey, one of the best-kept secrets on campus. Not long ago, Motlagh appreciated the team's obscurity. His first year, the team went 0-11-1, outclassed by many in the now-defunct Mason-Dixon Collegiate Hockey Association. "We got spanked, a lot," says Motlagh, who played varsity hockey in high school, back in his hometown of Cleveland.

But the team's fortunes quickly improved. In 2011, Johns Hopkins made it to the first round of the playoffs. The following season the team advanced to the championship game, where they lost 7-3 to American University. After the Mason-Dixon league folded, Johns Hopkins spent 2013 unaffiliated but still managed to play a 14-game schedule against many of the other Mason-Dixon orphans.

To be eligible in the conference, players need to be full-time students and, in the case of Johns Hopkins, maintain a 3.0 GPA. The team's lone woman—but not the club's first—is Tara Blair, a freshman biomedical engineering major who only recently earned a spot on the squad.

The team attracts students who played hockey competitively in high school and didn't want to hang up their skates, like goalie Stephen Johannesson, a junior from Calgary, Alberta, who joined the club his freshman year. A team member noticed Johannesson at the university's rec center wearing a Bauer hockey shirt. "He pulled me aside and asked me where I played hockey, and got me to come out," says Johannesson, a double major in biomedical engineering and applied math and statistics. Being both Canadian and a goalie made Johannesson, who played for the Calgary Royals Midget AAA team, both a lock and a prized addition to the team.

Johannesson says he's pleased with the quality of play in Division III club hockey, and has enjoyed being part of a team growing in stature. "I came on board at a time when we are building a pretty good squad," he says. "For me, it's been a blast. This is the best year we've had so far that I've been around."

Division III club hockey teams vary greatly in talent level, and personality. Johns Hopkins has a burgeoning rivalry going with Widener, which had its number until Johns Hopkins broke through with a bitterly fought win at the end of last season. Johannesson says the Widener games often get "very chippy."

"You begin tripping each other at minute 1 and then stop at minute 60," he says. "We finally got to shut them up last year."

Last year, the team hired a new head coach, Tim Schaible, a former hockey player at the University of Pittsburgh whose day job is as a program analyst for the National Capital Region's Homeland Security program. Schaible, a hockey rat, wanted to get into coaching and viewed Johns Hopkins as a chance to get his feet wet. He admits that practicing just two hours a week limits what he can teach.

"It's not enough time, but it is what it is," Schaible says. "We have to get right into systems and do less conditioning and skill work. Normally we would spend more time with the players in warm-ups and trying to explain things more, but we have such little time. But these guys pick things up very fast."

Like most club teams, Johns Hopkins ice hockey is financed by player dues, fundraising events, and money from the Office of Student Life. The players pay for their own equipment and jerseys, which feature the Hopkins Blue Jay.

The current incarnation of Johns Hopkins hockey dates back to the 1980s, but according to some history books, the first competitive hockey match in the United States was a game in Baltimore between Johns Hopkins and Yale on Feb. 1, 1896, that ended in a 2-2 tie. Samuel Mitchel, an astronomy graduate student, captained that 11-member team, which disbanded after only two years, citing transportation reasons and lack of student support.

Although there's some evidence that JHU club hockey was revived several times over the next 90 years, the sport didn't really catch hold again until the fall of 1983, when a story ran in the JHU News-Letter about a "new ice hockey team" on campus. In reality, there was no team. The story was the writer's attempt at a joke, but it got then freshman Andy Gray thinking. "That story put it in my mind that we could and should have a team," says Gray, who today is a Baltimore-based attorney.

The team has now played without interruption for 30 years.

Jason Paul Plush, a junior defensemen and a public health studies major, says he's grateful for this chance to continue his hockey career.

"I've been playing since I was 6 years old. Hockey has been a pretty huge part of my life," says Plush, who played competitively in a travel club team and in high school. "I never want to lose the feeling of going on the ice and playing. Our weeks can get pretty stressful with studies, so this is a fun release and something to look forward to."

As for getting Johns Hopkins ice hockey more on the map, Plush calls that a work in progress. "If I run into someone new on campus and tell them that I'm on the hockey team, a common response is, 'Wow, I didn't know we had a team.'" Plush says. "So we're trying to do a better job to promote ourselves."

For more information, including schedule and roster, visit http://pages.jh.edu/~icehockey