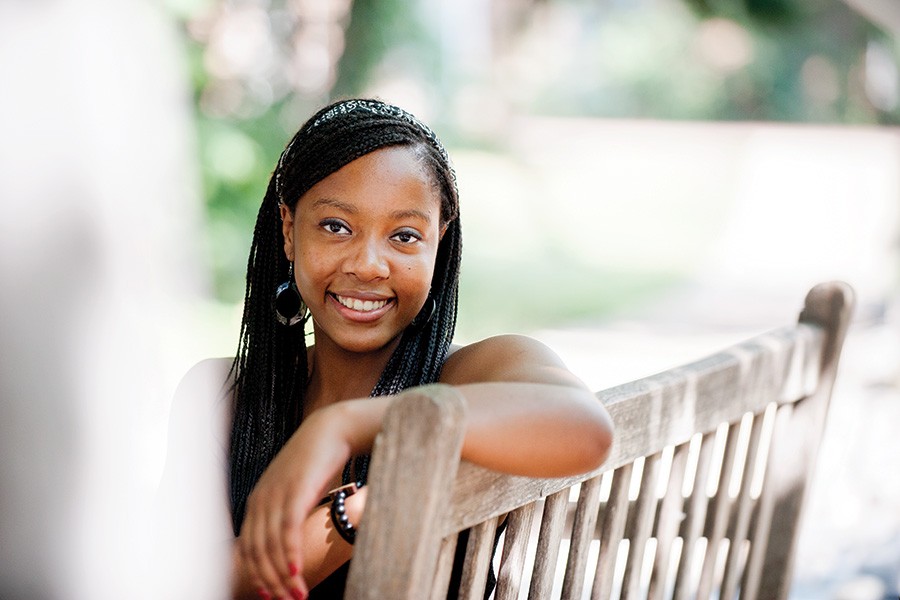 One night, Marlene Kanmogne had a dream. She dreamed that she could change reality and shift what was happening around her just by thinking about it.

When Kanmogne awoke, she was overcome by a feeling of power and control, emotion and energy that was so vivid and captivating that she didn't want it to end.

So the junior neuroscience major, who grew up in Cameroon and Oklahoma, decided to write it down. Over the next four years, she transferred the ongoing dream of the girl who could make things happen with her mind into a series of spiral notebooks.

"When I write, it's like there's a film in my head that I transcribe to paper as quickly as I can so that I don't lose the film," Kanmogne says.

It wasn't easy. When school was in session and there was class or volunteering or work with the African Students Association, she was far too busy to write as much as she wanted. But she persevered, completed her story, and this summer even got it published. "I'm a planner—I like to set goals and complete them," she says. "Not finishing was not an option."

The result is The Mind Wanderer (Solstice Press, 2014), a 305-page young adult novel about a 15-year-old girl named Melissa who realizes she has a powerful mind-transforming ability that's much bigger than she is and must adapt to it and accept its consequences.

Kanmogne, 20, hopes to become a physician. She always viewed the book as a personal project. Even after its publication, she has some difficulty accepting notice for being a novelist. Instead, she'd rather discuss the intricacies of the brain. "I do like writing—it's a great hobby of mine. But I think what really drives me is the mind part, the brain part. It all starts and ends with the brain," she says.

Yet, with a year and a half of college, medical school, and residency still ahead, she's not willing to leave her writing hobby behind. The Mind Wanderer, she says, is only book one of three.

"I still have dreams that further the story, and I know what Melissa will do," Kanmogne says. "I see the path of her life, and I want to follow it. And that just keeps picking at me to the point where I have to put it down on paper."