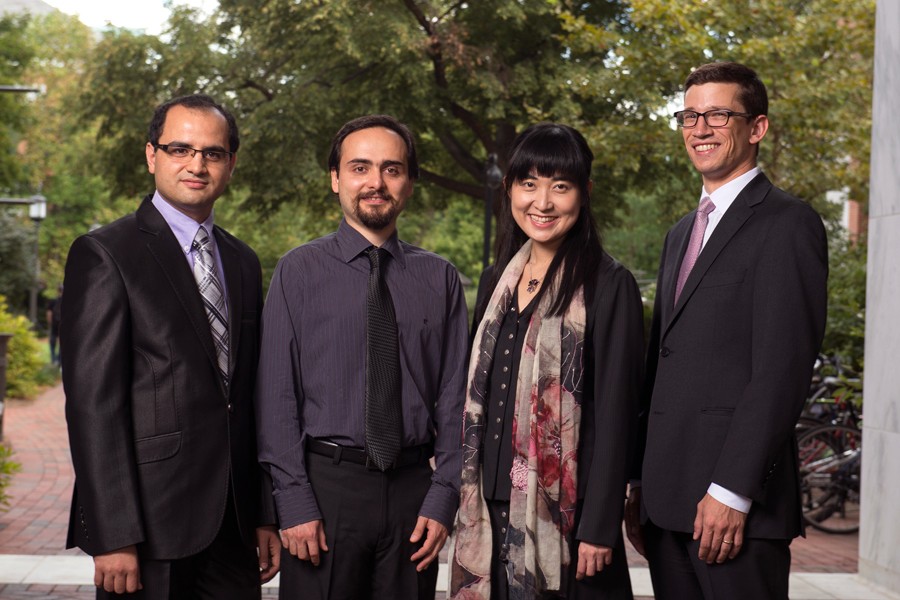 Five Johns Hopkins PhD candidates recently named to the 2015 class of Siebel Scholars are each pursuing important research projects in varied bioengineering topics involving promising health-related applications. In recognition of their research skills, academic achievements, and leadership qualities, the merit-based Siebel program is providing $35,000 to each student for use in his or her final year of studies.

The program was founded in 2000 by the Siebel Foundation to recognize the most-talented students at the world's leading graduate schools in business, computer science, and bioengineering.

At Johns Hopkins, the program supports doctoral students in bioengineering studies. Three of this year's recipients are in the Department of Biomedical Engineering, which is shared by the schools of Medicine and Engineering. The other two are in the School of Engineering's departments of Mechanical Engineering and Computer Science. They are as follows:

• Mert Ankarali, of Ankara, Turkey, is a fourth-year PhD student in the Department of Mechanical Engineering, working with faculty adviser Noah Cowan.

Ankarali's research seeks to discover the rules by which the human nervous system controls rhythmic dynamic behaviors. He focuses on the control-systems modeling of human locomotion, an understanding of which is essential for improving the quality of life of individuals suffering from motor deficits. His long-term goal is to provide a foundation on which to build locomotion rehabilitation techniques, design neural prosthetic interfaces, and develop engineered systems for human-computer interaction.

• Iraj Hosseini holds degrees from universities in Iran and Canada and is now completing his doctoral studies at Johns Hopkins in the Department of Biomedical Engineering and the Institute for Computational Medicine.

• Carmen Kut, who spent her early years in Hong Kong and now lives in Baltimore, is an MD/PhD student in Biomedical Engineering whose research focuses on real-time intraoperative identification of brain cancer using optical coherence tomography. For her research, she received a prestigious NIH F30 fellowship.

As an undergraduate at Johns Hopkins, Kut finished first in her class, and USA Today named her to the 2008 All-USA All-Stars Academic First Team. She is founder and president of Medical and Educational Perspectives, a 10-year-old nonprofit that evaluates and develops low-cost medical devices in developing nations.

• Joel Sunshine, of Pikesville, Md., also is enrolled in the MD/PhD program. Under the supervision of Jordan Green, Sunshine's research has focused on degradable cationic polymers for nucleic acid delivery and activation of the immune system for tumor immunotherapy by nonspherical artificial antigen–presenting cells. Sunshine is listed with Johns Hopkins colleagues on four provisional patents covering biomedical technology that he helped develop; three have been licensed to a Maryland company.

• Tuo Zhao is a fourth-year PhD student in the Department of Computer Science and is also affiliated with the Department of Operations Research and Financial Engineering at Princeton University. His faculty advisers are Han Liu (now at Princeton) and Raman Arora. His research focuses on large-scale nonparametric learning and its applications to high throughput genomics and neuroimaging.

Tuo is also an innovator in adaptive clinical trial studies and gene expression network analysis. In 2012, he co-authored a Nature paper on the exonic de novo mutations in autism spectrum disorders.