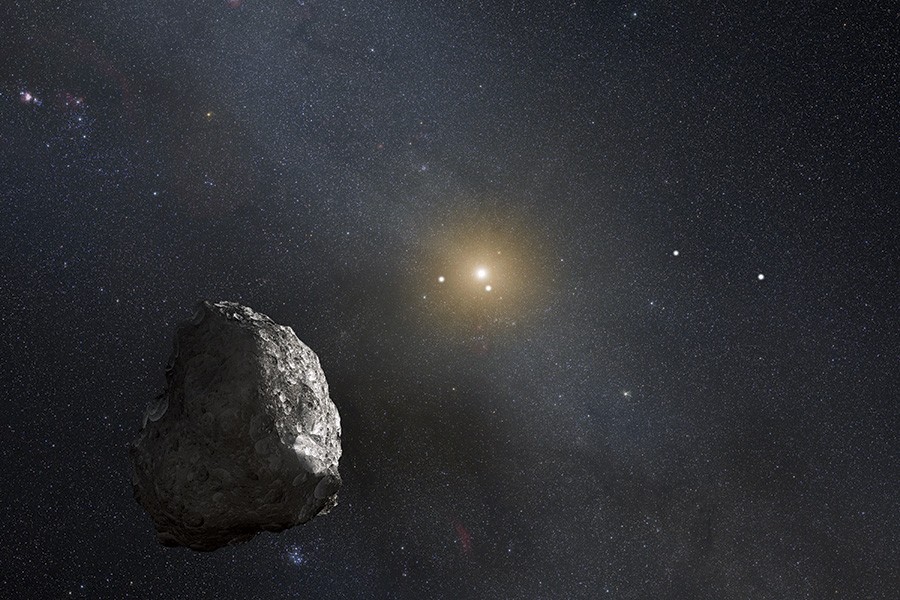 Image caption: A Hubble survey has uncovered three Kuiper Belt objects that are potentially reachable by NASA’s New Horizons spacecraft after it passes by Pluto in mid-2015. This artist’s depiction shows a KBO located on the outer rim of our solar system at a staggering distance of 4 billion miles from the sun.

Peering out to the dim, outer reaches of our solar system, NASA's Hubble Space Telescope has uncovered three Kuiper Belt objects that the agency's New Horizons spacecraft could potentially visit after it flies by Pluto in July 2015.

The Kuiper Belt objects, or KBOs, were detected through a dedicated Hubble observing program by a New Horizons search team that was awarded telescope time for this purpose.

"This has been a very challenging search, and it's great that in the end Hubble could accomplish a detection—one NASA mission helping another," says Alan Stern of the Southwest Research Institute in Boulder, Colorado, principal investigator of the New Horizons mission.

The Kuiper Belt is a vast rim of primordial debris encircling our solar system. KBOs belong to a unique class of solar system objects that have never been visited by spacecraft and which contain clues to the origin of our solar system.

The KBOs Hubble found are each about 10 times larger than typical comets but only about 1 to 2 percent of the size of Pluto. Unlike asteroids, KBOs have not been heated by the sun and are thought to represent a pristine, well-preserved deep-freeze sample of what the outer solar system was like following its birth 4.6 billion years ago. The KBOs found in the Hubble data are thought to be the building blocks of dwarf planets such as Pluto.

The New Horizons team started to look in 2011 for suitable KBOs using some of the largest ground-based telescopes on Earth. They found several dozen KBOs, but none was reachable within the fuel supply available aboard the New Horizons spacecraft.

"We started to get worried that we could not find anything suitable, even with Hubble, but in the end the space telescope came to the rescue," says New Horizons science team member John Spencer of SwRI. "There was a huge sigh of relief when we found suitable KBOs; we are 'over the moon' about this detection."

Following an initial proof of concept of the Hubble pilot observing program in June, the New Horizons team was awarded telescope time by the Space Telescope Science Institute for a wider survey in July. When the search was completed in early September, the team identified one KBO that is considered "definitely reachable" and two other potentially accessible KBOs that will require more tracking over several months to know whether they, too, are accessible by the spacecraft.

This was a needle-in-haystack search for the New Horizons team because the elusive KBOs are extremely small, faint, and difficult to pick out against a background of myriad stars in the constellation Sagittarius, which is in the present direction of Pluto. The three KBOs identified are each a whopping 1 billion miles beyond Pluto. Two of the KBOs are estimated to be as large as 34 miles across, and the third is perhaps as small as 15 miles.

The New Horizons spacecraft, launched in 2006, is the first mission in NASA's New Frontiers Program. Once a NASA mission completes its prime mission, the agency conducts an extensive science and technical review to determine whether extended operations are warranted. The New Horizons team expects to submit such a proposal to NASA in late 2016 for an extended mission to fly by one of the newly identified KBOs. Hurtling across the solar system, the spacecraft would reach the distance of 4 billion miles from the sun at its farthest point roughly three to four years after its July 2015 Pluto encounter. Accomplishing such a KBO flyby would substantially increase the science return from the New Horizons mission as laid out by the 2003 Planetary Science Decadal Survey.