A Johns Hopkins faculty member made Popular Science's annual Brilliant Ten list, which puts a spotlight on young scientists who are revolutionizing their fields. 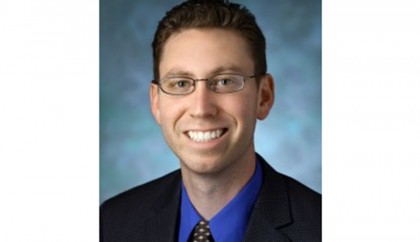 The magazine honored Jordan Green, an associate professor in the Department of Biomedical Engineering, which is shared by the schools of Medicine and Engineering, as among "the most inspired young scientists and engineers—researchers whose ideas will transform the future."

Green uses tiny, biodegradable particles to teach the immune system to recognize cancer cells. Other scientists have tried this with round particles, but Green decided to make them football-shaped to maximize the surface area available for interacting with immune cells. When given to mice with skin cancer, the elongated particles reduced tumor growth by an additional 25 percent, and the mice lived longer than those that had gotten round particles. Now researchers in his field know to take shape into account when testing similar therapies.

Green's ingenuity has also led to improvements in the prlonged, time-delayed release of drugs and other therapeutic agents, and his laboratory team has created collections of particles optimized for delivering genetic instructions to cells. These discoveries have led to promising results in laboratory animals suffering from a wide variety of ailments, including macular degeneration and cancers of the skin, liver, and brain.

The Brilliant Ten list appears online and in the October edition of Popular Science.