Paleoecologist known for her work on Chesapeake Bay ecology

Paleoecologist Grace Brush, a professor in the Department of Geography and Environmental Engineering in Johns Hopkins' Whiting School of Engineering, is known for her work on the pre- and post-Colonial ecology of the Chesapeake Bay. Her groundbreaking studies have helped scientists and geographers better understand how the clearing of forests surrounding the bay in the 18th century impacted the ecosystem. She has earned the Student Council's George E. Owen Teaching Award for outstanding teaching and devotion to undergraduates, Maryland Sea Grant's Mathias Medal for scientific research benefiting the Chesapeake Bay region, and the Estuarine Research Foundation's Odum Life Achievement Award. 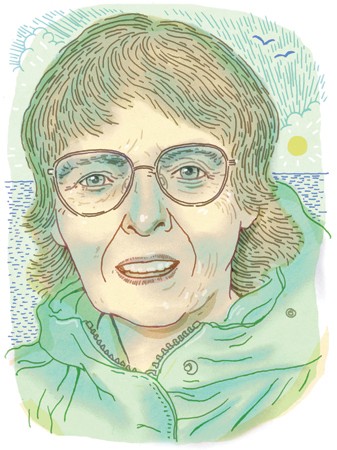 I grew up in a rural area in Nova Scotia. My father, an engineer by training, was in the lumber industry. Our family owned a fairly large property, mostly wooded, adjacent to a small lake where my friends and I would fish, or ride our bikes to nearby beaches. In winter, there was plenty of snow for sledding and frozen ponds for skating. Though isolated, it was a pretty nice place to spend as a child.

My early education was a combination of attendance at a small rural school where the students numbered 20 at most, correspondence courses, and instruction from my parents. I remember clearly my father teaching me geometry. My mother, who was deaf most of her life, was also well-educated—she taught me how to read and write from the time I was very young. She was very creative—wrote poetry and did beautiful drawings in old notebooks.

Every month, a large trunkload of books was delivered to the schoolhouse from the county or provincial department of education. There were history books, geography, science, novels, all of which I read. I loved reading about far-off places.

By the time I was 13, I had completed 10th grade, and that is about as far as I could go with that setup. So at the age of 13 I left home for a boarding school in Antigonish, about 25 miles from my home. I entered 11th grade and was terrified that I would not be able to do the work in a real school but ended up getting the Governor General's Medal for being first in the class. In Nova Scotia, high school ends either at 11th grade, if you are going to college, or otherwise at 12th grade. I graduated from high school at the age of 14. My parents thought it would be best for me to spend a year in 12th grade and I could then enter college as a sophomore. I attended St. Francis Xavier University.

I graduated from St. F.X., as it is known, at the age of 18, with a major in economics and minor in geology. During one of the geology classes, we went on a field trip to the Joggins Fossil Cliffs on the Bay of Fundy side of Nova Scotia. This is a very famous fossil site, where a 3-million-year-old forest is exposed. There were these huge trees that looked like ferns and other plants like nothing we had ever seen. I think that that is when I began to subconsciously wonder how this area got from being a tropical place to what it is now—a land of spruce trees, maples, aspens.

After college, I luckily got a job with the Geological Survey of Canada as a technician. I prepared sections of coal for microscopic analysis for geologists, and while I was making slides, I observed structures in these samples that turned out to be spores of plants. I was given the go-ahead by my supervisors to study these fossils. I presented the results of the study at an international conference on coal geology held in Antigonish. The paper was well-received.

Based on those studies, the Geological Survey decided to add palynology—the study of spores and pollen of plants—to the petrographic work they were doing. I was given the opportunity to set up a palynology laboratory but would need additional training. It was either that or bringing a palynologist from Europe or the U.S. to start this work. I really did not know what to do. A graduate student from MIT who was a summer worker at the lab told me, Go for it—this is a great opportunity. And I did. And it was.

I attended the University of Illinois as there was a lot of research on coal going on there, including palynology. I was a graduate student in botany at Illinois and was exposed to paleobotany and plant evolution. I decided that that is what I wanted to study.

I completed a master's degree in botany, went back to Canada, set up the palynology laboratory, and decided to leave. And I was more or less free to go wherever I wished. I applied for and received a research assistantship at Penn State, where there was a strong paleobotany department and a large coal research program. That is where I met my husband, Lucien Brush. We were married in 1953.

Lucien transferred to Harvard the following year, and I was not sure what would happen to my plans. It so happened that one of the attendees at the conference in Antigonish where I presented my first paper was Elso Barghoorn, a professor in the Biology Department at Harvard; he accepted me as a student. I was very lucky because at that time professors were not anxious to take on women as students. They assumed that they would not do much with their education, especially if married. The few women who did pursue graduate work very often ended up as unpaid assistants for their husbands.

Once we finished graduate studies, I was not sure what I would be doing next. We would go wherever Lucien got a job. He first worked for the U.S. Geological Survey, then the University of Iowa, later Princeton, and in 1969 came to JHU. I followed a husband.

Even though I was a graduate student studying at the all-male Harvard, I was not really aware of any sexual discrimination because women students, who were officially Radcliffe students, attended classes at Harvard with the men. However, exams were taken separately as the Radcliffe women were on the honor system; the men were not.

The reality of someone being excluded from all aspects of learning based on sex alone at Princeton, one of the great universities in the country, just did not make any sense and impressed on me the terrible injustice of racial discrimination, which I had certainly read about but did not experience or actually see. I had never lived in a large city.

Despite this situation at Princeton, they very generously made space available for me to do palynological work. There and elsewhere, when applying for NSF grants I often had to explain to department chairs why I was asking for salary for myself since I had a husband. I tried to explain that when I was working either in the lab or field I had to pay for child care.

Shortly after we moved to Baltimore, the state of Maryland set up a power plant siting program. It was at the time that the Calvert Cliffs nuclear plant was being built, and there were many issues about the siting of the transmission lines. There were also questions about the effect of coal-fired power plants that produced a lot of sulfur on Christmas tree plantations, for example. The state decided that they needed to know more about their tree resources, and they put out a request for proposals to construct a map of the forests of Maryland. I responded to the RFP by proposing to map the vegetation of Maryland and compare the species distributions to geology/soils distributions. This three-year study, including the map of the natural vegetation of Maryland, was published in Ecological Monographs. This was not paleo work, but it provided much insight into the paleo work we would do later on the Chesapeake Bay.

Around this time, there was much concern about what was happening to the bay. The fishery was down. The submerged grasses, important as nursery grounds and food for estuarine organisms, were pretty much gone everywhere. Congress provided $25 million to try to find out what was causing the decline of living organisms in the bay. I proposed that we could study seeds collected in sediment cores to reconstruct the history of the grasses. When did they begin to disappear? Had they disappeared previously and come back?

We were able to show that the recent disappearance of the grasses was unique, and that sedimentation increased from four- to tenfold since Europeans began to cut down the forests and plant crops, and that nitrogen and phosphorus inputs into the estuary corresponded with the use of fertilizer on the land. As sediment poured into the bay as the land was plowed, the water became turbid, limiting light to the benthic areas and reducing the amount of photosynthesis and hence oxygen. The incoming fertilizers were providing nutrients for the small algae who lived in the upper waters, where light was not limiting. These organisms proliferated beyond what could eat them; they sank to the bottom, where their decomposition used up much of the remaining oxygen in the bottom waters, which became anoxic. Nothing could live there anymore. These studies showed how sediment and fertilizers coming in from the land were smothering much of the rich benthic products. Previously, it was felt that the problems with the bay were due to industrial and sewage waste.

Not having a career was never an option for me. It was not always easy. Lucien and I had an arrangement that when one of us was away on extended travel—we did a lot of traveling, sometimes for a month or two for our work—the other would take care of the needs at home.

I was very fortunate in my marriage. It was the best decision I ever made. Lucien supported my work not only intellectually, but for many years my income was limited to what I could charge to research grants, which some of the time covered child care costs and not much else.

In 1990, I was appointed a full professor with tenure in the Engineering School [at Johns Hopkins], which provided a steady income and paid for the teaching and advising of students, which I had been doing all along.

My husband died in 1994. I did not know that I would be able to continue the work without the support I had come to depend on for so many years. But it has all worked out. I have had incredible students, all doing exciting science. I have a wonderful family. I am very thankful for and proud of both.