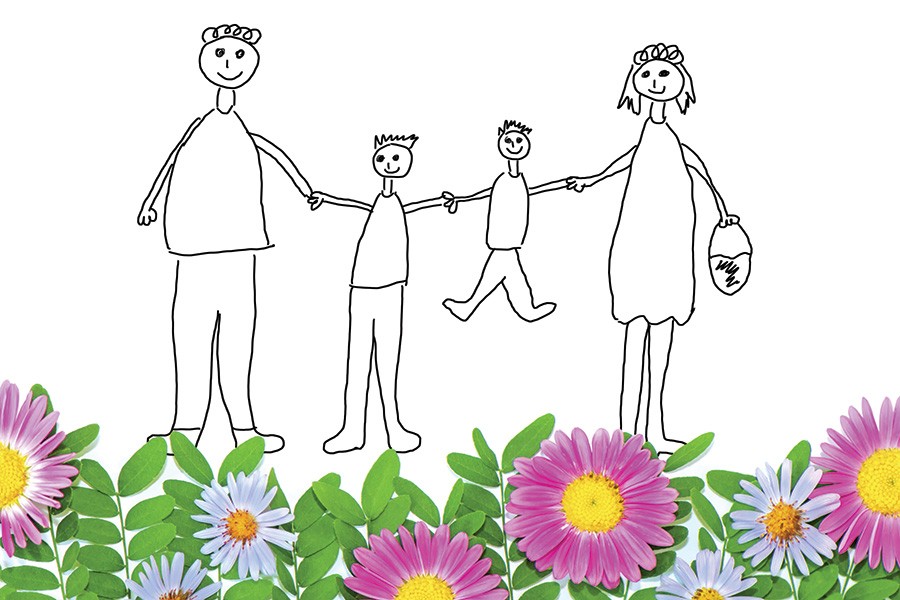 Becky Hanst, her sister, and their husbands arrived in Beijing in June 2013. After a 17-plus-hour flight, the couples hopped on a bullet train for an hourlong ride to Shijiazhuang, a city of about 15 million.

The time had finally come that Becky and her husband had anticipated for what seemed like years. They had been unsuccessful in having their own biological child, and on that day, they met their 2-year-old daughter Katie.

"I was happy, scared, sad, nervous—a whole range of emotions at the same time," Hanst recalls. "Katie looked scared. She did not want to come to either of us at first. Ultimately, she let my husband hold her, but I was happy to see that she looked healthy." And "absolutely adorable," adds Hanst, a division administrator in the School of Medicine's Department of Medicine.

"She wore a dress with a tutu, and she had a small backpack for her snacks," Hanst says. "My husband and I brought a doll and a bottle to try and woo her to us. She cried and became upset, which is actually a good sign—it meant that she was attached to the people who cared for her, and that she would eventually be able to form an attachment with us."

Hanst's sister accompanied them to China to adopt her second child. She had gone through the process before and had such ease and success with it that Becky and her husband decided to try it themselves.

"We got to travel together at the same time because we were matched with two little girls from the same orphanage," Hanst says. "I don't think it was a coincidence."

Hanst's sister and brother-in-law brought along their son, who would be meeting his little sister and his cousin for the first time.

"To have a child along who was small, who could play with them, and who looked like them helped put the girls at ease," Hanst says.

The adoptions were made possible through an orphanage that matches candidates with a child that has some level of disability. Applicants can decide on the degree of disability that they are able to manage.

"Katie was born without a left thumb and has some orthopedic issues that we might have to deal with in the future," Hanst says. "She is very loving and very smart. She has no intellectual issues."

The Hopkins Adoption Assistance Program was established in 1992 to support full-time faculty and staff with a single-child adoption. The program offers reimbursement, up to $2,500, for medical fees, legal and court fees, travel expenses, and temporary foster care charges affiliated with the adoption.

"Adoption can be expensive," says Heidi Conway, senior director of Benefits and HR Shared Services at Johns Hopkins. "And this program does not even come close to covering the costs. It is just an enhanced offering to recognize the differences in how people get to be families. We are happy that we can offer the program. We think that when someone is moving down the road of adoption, they are moving down regardless of our benefit. This just provides them with extra support in achieving their goals of starting a family, or adding to one."

Hanst had been exposed to the Adoption Assistance Program as a result of her 19 years of employment with the university. She says that it is not a very well-known benefit, and that people going through adoptions should take advantage of it.

"The fact that the university offers this is lovely, and I would certainly recommend it to any friend or colleague who is eligible," Hanst says.

And how is Katie doing now, a year after her move to Baltimore?

"[Katie] did pretty well when we returned to the U.S.," Hanst says. "A challenge has been getting her accustomed to going to sleep by herself, and at a reasonable hour."