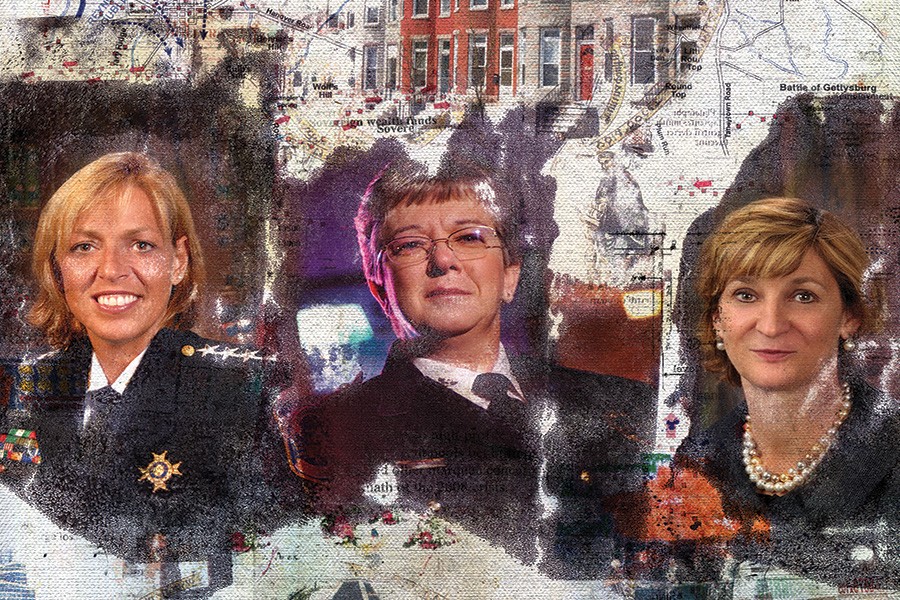 Image caption: Among the graduates of Johns Hopkins’ Police Executive Leadership Program are, from the left, Cathy Lanier, head of the D.C. Police Department; Teresa Chambers, former head of the U.S. Park Police; and Polly Hanson, chief of the Amtrak police force.

In the early 1990s, Polly Hanson was a 40-something-year-old captain in the D.C. Metro Transit police force. She had always wanted to go to graduate school—and even had a stack of college catalogs under her bed to prove it—but she could never find an appropriate program. Then, at a training session, she met Sheldon Greenberg, associate director of a Washington-based law enforcement think tank, who told the group that he was helping Johns Hopkins start a special graduate-level program for leaders in public safety. "I couldn't stop raising my hand, asking questions," Hanson recalls. "I basically accosted him after his talk."

In 1994, Hanson would join the first cohort of students at the newly christened Police Executive Leadership Program, part of what was then Johns Hopkins' School of Continuing Studies. At the time there was nothing like it in the country. Twenty years later, now known as the Division of Public Safety Leadership and part of the School of Education, there still isn't.

The idea for the program was hatched by Greenberg and Stanley Gabor, then dean of the School of Continuing Studies, who had come up with a somewhat radical plan. Their idea was to use the liberal arts—classes in ethics, literature, economics, and history—to teach upper-level public safety officials the leadership skills they needed to run their departments. There would be no courses in criminal justice or law enforcement. Instead, the students, who would progress through the two-year program in cohorts, would learn about, and from, great leaders of the past, the nuances of community development, the history of racial conflict, even strategies employed by generals during the Battle of Gettysburg.

"We wanted to provide access to ideas they would not normally be exposed to—different types of leadership courses in the arts and humanities and business," recalls Greenberg, who in 2012 stepped down after leading the division for 18 years. (Doug Ward now heads the program.) "To be a really solid leader in our field, you need to think through things that the traditional leadership courses don't give you. And you need to have a historical basis on how we got where we are, so that you don't make the same mistakes we've made in the past."

The program was a success from the start, filling a void for area public safety chiefs.

"We were great tacticians, and we were great at getting new kids in the door and teaching them to be cops, but there was nothing to prepare us for managing and leading, budgeting, and dealing with social issues in our communities," says Teresa Chambers, who, as a captain with the Prince George's County Police Department, was among a half dozen law enforcement officials who provided input before the program got off the ground.

During the last two decades, PSL has granted degrees to more than 1,000 leaders from all branches of public service: law enforcement, fire/EMS, emergency management, transit, campus safety, private security, and the intelligence and military communities. The division now offers both nondegree and degree programs, including a bachelor of science and master of science in management and a master of science in intelligence analysis, and has trained more than 20,000 public safety leaders as part of noncredit programs. Nearly 80 of its graduates have gone on to become chiefs of police and leaders at government agencies, including many notable minority and women alumni, such as Cathy Lanier, head of the D.C. Police Department, and Melissa Hyatt, a lieutenant colonel with the Baltimore City force.

"From the first day, I was immediately impressed," recalls Hyatt, who entered the program in 2009, as a sergeant. "The fact that we were in cohorts, groups of our peers, was a really attractive feature. I'm always trying to learn from those around me, and it was a very diverse group of people with diverse backgrounds—police, fire, federal law enforcement. I was constantly learning from my classmates."

"Early on, we said we will not run a cohort if it's not diverse," recalls Greenberg. "We needed to change the profession to be more reflective of communities we serve. Throughout the past 20 years, our enrollment has exceeded the percentage of women and minorities in public safety nationally by leaps and bounds."

One of those women was Chambers, who attended PSL during its second year and says that the experience was invaluable in helping her advance. "For women in particular, who were trying to move up the ranks, we knew that higher education was the way," says Chambers, who later taught several cohorts at Hopkins and went on to lead the Durham, N.C., Police Department and the U.S. Park Police before retiring in December.

She also says that those early years were important in bringing together regional leaders who may have previously bristled at collaborating. "At that time, police agencies weren't sharing with one another, and especially larger agencies had this unhealthy ego that they didn't need anyone's help. But it was a whole new era for all of us in that class. It was such an exciting opportunity to see the world of policing from different points of view and then apply it," says Chambers, who worked closely with Lanier during the Washington Navy Yard shootings last year.

Kathy Patek was the ninth woman to join the Baltimore City police force, in 1974, and earned her bachelor's degree from PSL 25 years later as a commander. She says the program helped her see the big picture. "When you're a cop, you kind of get tunneled into thinking in a certain way. But the course work really helped me look at things differently. I remember the class on Gettysburg, looking at leadership and Pickett's Charge. Really, how does a person get all these people to charge up a hill when they know they're going to die?"

Polly Hanson went on to become chief of the D.C. Metro Transit Police and since 2012 has overseen more than 500 officers in 46 states as chief of the Amtrak police force. And she still has the "class picture" of her cohort behind her desk at work. "I remember the day we took that picture," she says. "We're all dressed fancy pants in our uniforms and we went to the [Hopkins] cafeteria and everybody was like, 'Oh my God. Is it a raid?' Everybody stopped eating. You could hear a pin drop."

Looking back, Hanson says she can't believe 20 years have passed since she made her decision to get an advanced degree. "It was one of those things—at the end we knew we were part of something wonderful because we were the first. The opportunity to be part of such a prestigious program at a wonderful learning institution and then be the group that began it all was just such a privilege and an honor. It still is."