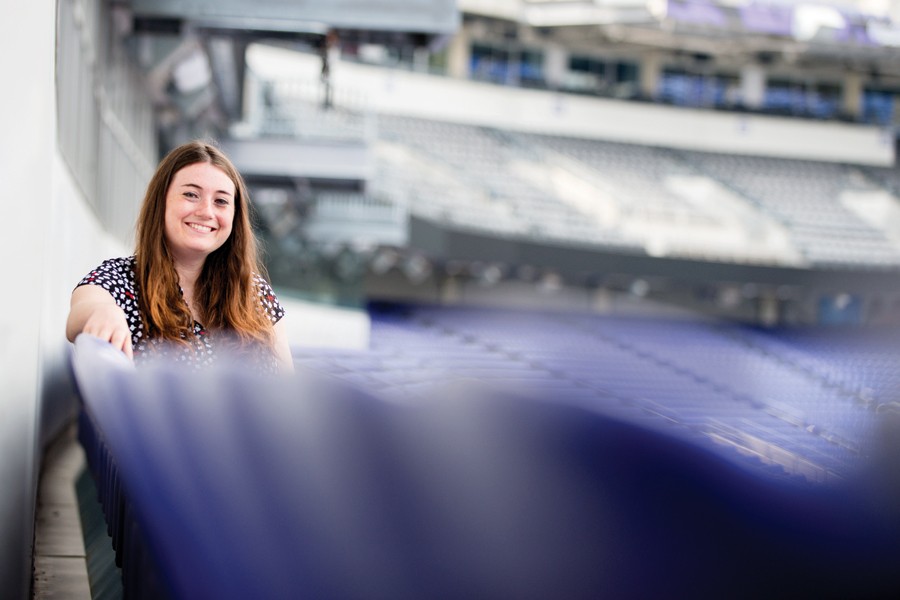 Martha Harrison, Class of 2014, has absorbed a world of wisdom in her four years at Johns Hopkins University.

One of the pearls gathered in Baltimore—a gem at the heart of Harrison's thesis for her Woodrow Wilson Undergraduate Research Fellowship—is a verity passionately confirmed by any barstool philosopher from Canton to Carney.

"We are better at this than all of these other cities," says Harrison referencing her paper. "And we put the game on the map."

"This" is the game of professional football. The "we" are the people of the city of Baltimore and its many suburbs.

It is well-established that the 1958 National Football League championship—"The Greatest Game Ever Played"—was the beginning of football's replacing baseball as the national pastime of the United States.

In that game, future Hall of Fame quarterback Johnny Unitas led the Baltimore Colts to victory in "sudden death" overtime against the New York Giants, and a new religion appeared on the banks of the Patapsco River.

After discarding her initial Woodrow Wilson idea to study the effect that therapy animals, particularly dogs, have on Alzheimer's patients (the sample pool would have been too small, she says), Harrison turned to her first love: football.

The bulk of fieldwork—in a city she came to embrace as a spiritual home, over a season that would end with a championship—took place in her junior year.

"Baltimore was the best model for my research. Football is so much bigger here than it is for the typical sports fan. The city is real," says Harrison, a 22-year-old who grew up in Tucson, Ariz., and northern California. "It is a place of great disparity. Yet football is one of the few things that make us the same, transcending gender, income, and generations."

She continues, "I am an upper middle class [white] girl from Arizona living in Baltimore because I'm attending an elite university, and the Ravens are the purest connection I've ever had with the people who live and work here.

"Other cities don't have the kind of racial and monetary divides as Baltimore, and they also don't have as strong a love for sports. We have that love because we need it. We want something that makes us the same, and in the Ravens, we have found it." Harrison's thesis is called "52,000 Words: The Story of Baltimore and Its 2013 Super Bowl Champion Ravens."

Harrison used her $7,500 fellowship funds for tickets to Ravens 2012 home games (watching away games at bars in Fell's Point) along with travel costs and tickets for playoffs and the Super Bowl and a hotel room in New Orleans for the championship. Her Super Bowl ticket—a cheap seat high in the end zone—cost $1,300.

The thesis's title pays homage to the Ravens' retired superstar middle linebacker—Ray Lewis, No. 52—and the research surprised Harrison, a scholar of the game who, because of deep family roots in Boston, has been a lifelong New England Patriots fan.

"I've been a huge football fan my whole life but have never lived in a place where the local team is such a part of the city," says Harrison, a psychology major who at press time was deciding between Tufts University and the University of Maryland for medical school. "That is one of the main reasons I was so interested in studying the Ravens."

Harrison had the unlikely good fortune to study the team and its fans over an unusually dramatic season that ended with a Vince Lombardi championship trophy going to Baltimore.

(Before play started, oddsmakers had the Ravens a 15-to-1 shot to go all the way.)

Because the tale was about an intimate relationship, Harrison wanted the work to have the corpus and cadence of a story—one for the ages, it turned out. To that end, she chose Tristan Davies of the university's Writing Seminars as her faculty adviser.

It is, after all, a love story. One that began long before the Ravens played and won their first game at the now demolished Memorial Stadium (just down 33rd Street from Johns Hopkins' Homewood campus) on Sept. 1, 1996.

Folks in the vicinity of middle age may recall that there was another NFL team that played in Crabtown, a fabled franchise known for blue horseshoes on pure white helmets: the aforementioned Baltimore Colts, established in 1953. (Only fans in Green Bay can legitimately claim more "ownership" of a team than Baltimore. The green-and-yellow faithful have been shareholders in the publicly traded nonprofit since 1923.)

Harrison completed her thesis in the 30th anniversary year of the Colts being wrenched from Baltimore—a cowardly, middle-of-the-night move—by the forever-villainous and long-dead owner named Robert Irsay.

"The trauma of losing the Colts was something I asked about a lot," says Harrison. "What I found really interesting is that most of the people stopped watching football altogether when the Colts left and didn't start again until the Ravens. That is something I'd never experienced."

Dean Bartoli Smith knows this well. The native Baltimorean (and director of the Johns Hopkins University Press' Project MUSE, which provides digital content in the humanities and social sciences) is the author of Never Easy, Never Pretty: A Fan, A City, A Championship Season, published in 2013 by Temple University Press.

In early spring, Smith and Harrison met at the Charles Village Pub, a favored Hopkins hangout adorned with black-and-white photographs of great moments in Baltimore sports history, to talk football.

The two had never met and grew up generations apart in cities with distinct sports histories. Yet they immediately began communicating in a specialized language each has mastered over a lifetime.

Smith, who as a kid once carried Johnny Unitas' shoulder pads at a practice, became a writer who reported on the funerals of Colts greats from his childhood: John Mackey, Art Donovan, and Johnny U, whom he once thought of as a surrogate father.

Harrison, the station manager for WJHU, the student-run radio station, who also works in the university's Athletics Department, spoke with better and more nuanced knowledge than most professional sports-radio hosts.

Together, they dissected the 2012 season (which ended in a 34-31 Super Bowl win over San Francisco) like a couple of molecular engineers.

"The Ravens don't train for plays, they train for situations," said Harrison.

"We draft for football instincts," Smith replied. "It's a belief system."

Football, said Harrison, "is a blood sport," a quick and violent game that appeals to a certain American lust for brutality and a desire not to just root against the opposing team but to hate it. In Baltimore, that means hating the Pittsburgh Steelers.

"They say they hate each other, but they all know they love the same thing," said Harrison about the two teams' fans.

"And the hate is artificial," said Smith. "You have to hate the Steelers in Baltimore to be part of the club."

What are real are injuries, particularly concussions, chronic traumatic encephalopathy, and other head injuries on which Harrison spends much time in her paper.

The price paid, she says—in human costs and legal settlements from a league that last year, according to Forbes magazine, made $9 billion—will make the game unrecognizable 30 years from now, if it exists at all.

Because to make it safer is to make it less appealing to those who relish watching a man go down.

"Americans will never admit that they like to see people hitting each other," said Harrison, noting that families are less willing to let their boys play the game. "In 30 years, I don't want to see [Patriots quarterback] Tom Brady with Parkinson's disease. If the rules don't change in the next 10, everyone is going to have a crippled hero."

Dean Smith knows it well, having watched with sadness as Unitas (1933–2002) was barely able to hold a pen near the end of his life to sign autographs or do anything else.

A year before he died, Unitas was on the cover of Sports Illustrated, this time for being unable to use his right hand, a handicap directly related to his playing career and one for which the NFL denied one of its greatest players disability benefits.

Harrison believes she owes Baltimore something for giving her "a place I can call home" and plans to put her thesis online for all to read and reflect upon.

"I want to give it to Baltimoreans," she says, echoing the words of Ray Lewis, with which she closed her thesis: "Baltimore, forever my city, I love you."