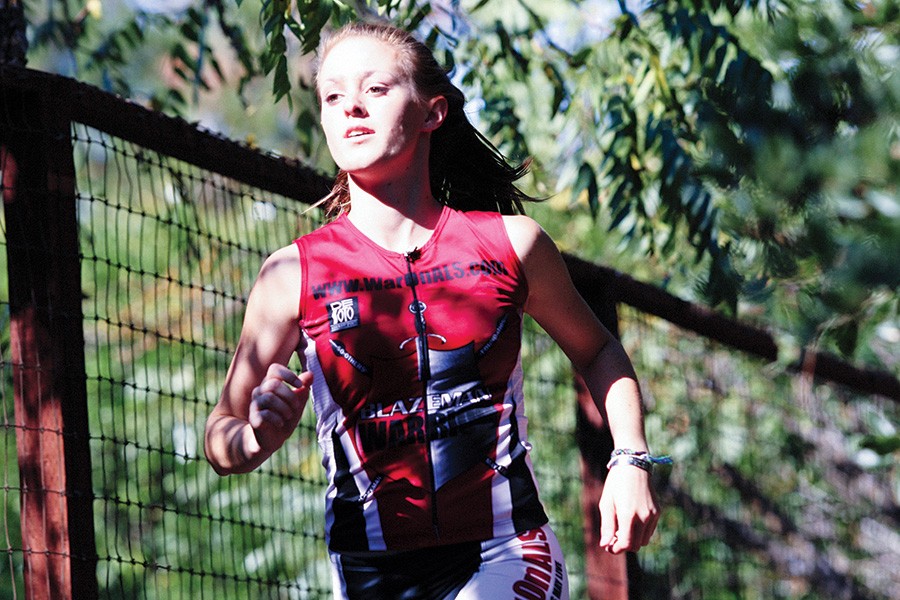 Image caption: Since she was 8, Jenny Hansen has competed in 25 triathlons. Her next will be an Ironman to be held in August in Louisville, Ky.

As Jenny Hansen neared the finish line to her first Ironman triathlon, the then 18-year-old smiled, stopped—and lay down. Hansen hadn't tragically come up lame mere feet from her goal. She felt fine, or as good as anyone would after swimming, biking, and running 140.6 miles over 13 hours.

Hansen had a message to send, so she positioned her body parallel to the finish line and proudly rolled over it, hands stretched high. Some stared incredulously, but those in the know applauded. Hansen had just executed the Blazeman roll, a tribute to American triathlete Jon Blais, who, five months after being diagnosed with amyotrophic lateral sclerosis in 2006, became the only individual with the disease to complete an Ironman. Blais had conceived the move after declaring, "Even if I have to be rolled across the finish line, I'm finishing" as a celebratory, symbolic statement.

Since then, numerous athletes have re-enacted the Blazeman roll as a symbol of hope, and as a means to raise awareness for ALS, better known as Lou Gehrig's disease.

For Hansen, the roll in Arizona wasn't her first, and it certainly won't be her last.

Now a public health studies major at Johns Hopkins, the rising junior has sights set on her next Ironman triathlon, one to be held this August in Louisville, Ky. The Los Altos, Calif., native says she's drawn by the physical challenge, and by an overwhelming desire to help find a cure for ALS. For Hansen, this fight is personal.

In June 2009, Hansen, then a high school freshman, received an email from her mother that would alter her life path. The message, which she got just moments before suiting up for a school basketball game, informed Hansen that Nancy, her former basketball coach, had been diagnosed with ALS, a progressive and relentless neurodegenerative disease that ravages muscles and motor function but leaves the mind intact. Nancy had coached Hansen in elementary school, and then later became both mentor and friend. It was with the encouragement of Nancy that Hansen had enrolled at a private high school with a thriving basketball program.

"Nancy told me if I was really serious about basketball, I should go to this high school instead of the public school I was leaning toward," says Hansen, whose high school team went on to win two regional titles and get to the state championships. "Attending that school is what prepared me and prompted me to come to Johns Hopkins. It was through Nancy's encouragement and coaching that I've gotten to this point. Just talking about life and basketball with her really shaped me as a person. I became part of her family. She's had a tremendous impact on me."

Now her coach faced a battle against a disease that had all the chips stacked in its favor. For those with ALS, the gradual degeneration and death of the affected motor neurons leads to an inability to initiate and control muscle movement. Patients in the later stages of the disease may become totally paralyzed. Most people with ALS die from respiratory failure, usually within three to five years of the onset of symptoms.

At the time, however, ALS was just three letters to Hansen. She had to find out more.

"My mom later showed me this video of Jon Blais, who raced at the Kona World Championships in Hawaii, and how even though he had this disease was able to finish it. I understood then what the disease was about and spent the whole rest of the day thinking about it," she says. "It's a death sentence, and probably the worst way to die. I knew I wanted to do something. Nothing can be done right now to fix it or stop it, but I'm a fixer. I need to fix things."

With Blais as inspiration, Hansen told her mom she wanted to race triathlons under the banner of the Blazeman Foundation, which carries on the mission of its founder to build awareness of ALS and raise money for research. She signed up with the organization and at age 16 became its youngest member, earning her the moniker "the Blaze kid," which inspired her donation page, blazekid.com. Her first race was the 2009 Wildflower Triathlon in California. "I told people I'm doing this race for my coach Nancy, please support me," she says. "I gave people the background on Jon and hoped people would want to help."

They did. The money started to trickle in, and soon Hansen set out to raise $40,000 before she graduated from high school (a figure she reached not long after). Her new goal is to raise $100,000 before she leaves Johns Hopkins.

Hansen has been racing in triathlons since the age of 8, when her mother noticed an advertisement for one at an REI store. She has since done 24 more, of various distances, from a kid's triathlon where the swim portion takes place in a pool to the grueling full-distance 2011 Ironman Arizona that she completed in 13 hours, 23 minutes, and 46 seconds. Although Hansen claims she's not particularly fast, she did manage to win two IronKids events. She also drew her mother into the sport, and the two rolled through the Arizona finish line together.

Since 2009, Hansen has ended every race with the Blazeman roll.

"I will never cross another finish line on my feet," she says. "My mom asked me just recently, So what if you're coming down to the finish line of an Ironman and you're neck-and-neck with someone and can finish first? I told her I would stop and roll. I'd gladly come in second. The roll will happen."

She doesn't reserve the gesture for triathlons either. For the Nike Women's Half Marathon in Washington, D.C., Hansen performed the roll while wearing bib 179, the number of Jon Blais when he ran the Ironman.

"It was really, really special to wear that number. It's considered an honor," she says. "And I gave the organizers a heads-up about what I planned to do at the finish line, like I do at smaller races where volunteers might try to catch me or pick me up when they see me head to the ground."

For right now, competing in triathlons is where Hansen feels she can make the biggest impact on ALS, and the reason she decided to forgo playing basketball in college. She says it's the perfect blend of her passion for sport and "hatred" for the disease. She foresees a day when she can do more. A pre-med student, she worked at the Robert Packard Center for ALS Research at Johns Hopkins her freshman year, and hopes to intern at the center next fall. She was delighted to meet and work alongside Jeff Rothstein, the center's medical director, whose research on ALS pathogenesis led to the first successful FDA-approved drug to alter neurodegeneration.

While there is some hope, no cure for ALS is on the horizon, and the prognosis for patients has not altered much in the 70-plus years since Lou Gehrig died in 1941.

Hansen has seen the devastation the disease can wreak. Her coach Nancy used to be the picture of fitness. She ran five miles each day, played with the girls in basketball practice, and was very active with her own five children. Then came the thumb twitches, and a need to sit more while coaching. She eventually lost the use of her hands, and today has little to no arm and leg movement. She still can "talk up a storm," Hansen says, and she posts on Facebook, trying to stay positive.

"There are good days and bad days; she acknowledges that," Hansen says.

But Hansen envisions a time when nobody has to go through bad ALS days. So she will continue to swim, bike, and run, and spread the word. She has become a triathlon and ALS ambassador of sorts, recruiting others to race with her. To date, she has raised more than $46,000 and is determined to reach her $100,000 goal.

"I have no idea if I will be able to reach it, but I really hope I can," she says. "It's dependent on people who donate, [and] sharing what they did with others. I get wonderful notes all the time from people who say things like, 'What you're doing is great. My mother suffered from this disease.' That just adds fuel to my fire. I know I'm doing this for more than Jon and Nancy."