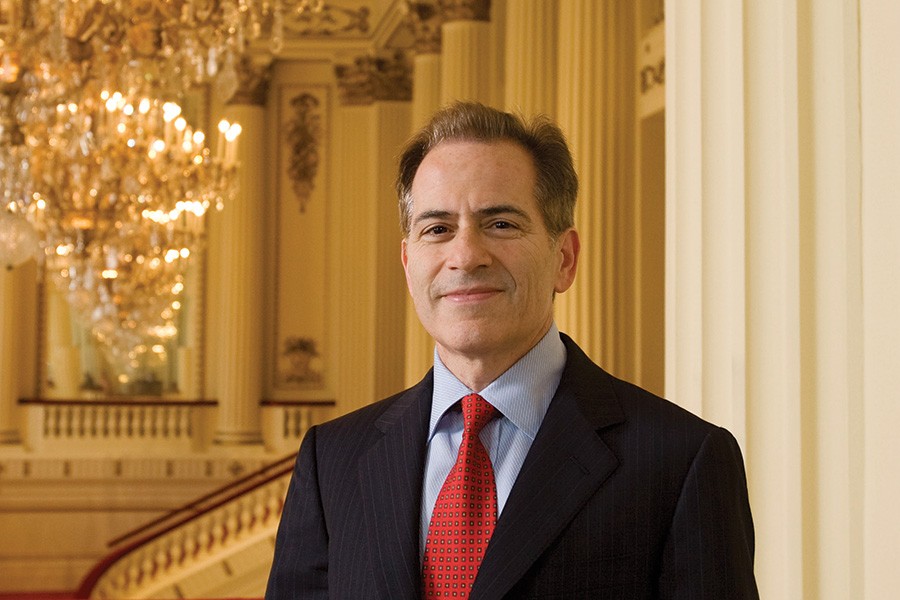 Image caption: Fred Bronstein calls the move from a major orchestra to a university and conservatory a ‘natural extension’ of his career-long interest in the formation of young musicians. He joins Johns Hopkins in June.

Fred Bronstein, the highly successful chief executive of one of America's major symphonies, an accomplished pianist, and a dedicated music educator, has been appointed to lead the Peabody Institute of the Johns Hopkins University, the nation's first music conservatory.

Bronstein, president of the renowned St. Louis Symphony since 2008 and previously of the Dallas and Omaha symphonies, will join the university in June.

"Dr. Bronstein's experience, accomplishments, and creativity—as a performer, as a music educator, and, most recently, as a dynamic and visionary chief executive—mark him as the leader for Peabody's future," says university President Ronald J. Daniels, who recommended the appointment to the Johns Hopkins board of trustees.

"His deep resolve, commitment to excellence, and inclusive, collaborative spirit will drive Peabody to become even more prominently a major force in the music world," Daniels says. "He will unite faculty, students, staff, alumni, and other institute supporters behind a shared vision of what Peabody can be. And he will lead them in making that vision a reality."

"Peabody is the oldest and among the top conservatories in the United States today," Bronstein says, "and Johns Hopkins is a leading institution worldwide. For me to be able to do this kind of work in this context is a once-in-a-lifetime opportunity, and I'm incredibly excited and honored."

Bronstein will succeed Jeffrey Sharkey, who announced in October that he will return to the United Kingdom to become principal of the Royal Conservatoire of Scotland. Bronstein's title will be dean, a switch from the title of director held by Peabody leaders since before the institute became affiliated with Johns Hopkins nearly four decades ago. The change brings Peabody's leadership structure into line with that of the university's eight other academic divisions.

Bronstein called the move from a major orchestra to a university and conservatory a "natural extension" of his career-long interest in the formation of young musicians. His first arts administrative experience was as executive director of the Civic Orchestra of Chicago, the training orchestra of the Chicago Symphony, which has hundreds of alumni employed with orchestras around the world.

His stints as president of the Omaha Symphony and the Dallas Symphony Orchestra, and more recently in St. Louis, have all involved significant educational outreach. As a performer, he toured for eight years with Aequalis, a chamber group he co-founded with a focus on new American music, innovative programming, and educational outreach. That experience also taught him the entrepreneurial skills young musicians today must develop, he says.

"As satisfying as it is to run a major orchestra," Bronstein says, "I'm really excited to take what I've learned and focus it earlier in the pipeline. Young musicians are coming of age in a more complex environment than ever before. They need to be highly accomplished in their art, and prepared to be independent entities who are entrepreneurial, community-minded, creative educators, and good communicators. They need to be prepared to develop their own careers and, in a sense, to develop their own audiences."

Robert C. Lieberman, provost of the university and chair of the search committee that identified Bronstein, says that the new dean's skills, experience, and commitment to young musicians made him a superb candidate.

"Fred sees Peabody as uniquely positioned within Johns Hopkins to train students to be both exceptional artists and effective advocates for music and the arts," he says. "But he also sees the university's opportunity to further draw on the unique talents of Peabody's faculty and students. He gets it. He's a strategic, visionary leader, and I am thrilled that we've been able to recruit him."

The Peabody Institute was founded by philanthropist George Peabody in 1857—nearly 20 years before the Johns Hopkins University opened—and was America's first academy of music. A part of Johns Hopkins since 1977, it is one of the anchors of Baltimore's Mount Vernon Cultural District and consists of a conservatory—preparing professional musicians—and the Peabody Preparatory, which provides noncredit music and dance instruction and pre-conservatory training for community members of all ages.

Bronstein graduated from Boston University in 1978 and earned a Master of Music degree at the Manhattan School of Music in 1982. He received his Doctor of Musical Arts degree from the State University of New York, Stony Brook, in 1987.

In 2005, Boston University's College of Fine Arts presented him with its Alumni Award for Distinguished Service to the Profession. He has served on the college's Dean's Advisory Council and on the university's board of overseers.