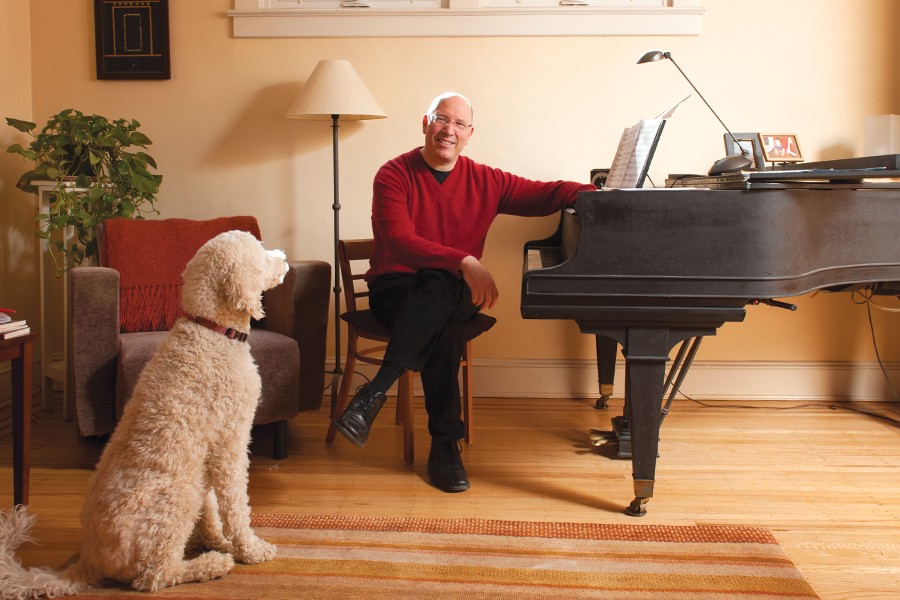 Playing the beautiful music of Mozart or Beethoven can be sublime. Being part of the creation of new music? That's a completely different rush. "There's an added excitement when you're working with somebody who is living in our time, and we present that to people for the first time in their lives," says Jed Gaylin, music director of the Hopkins Symphony Orchestra. He's talking about debuting works of living composers in the abstract, but it's a process with which he's intimately familiar. Since he became involved with the symphony in 1991, Gaylin and the HSO have performed the American or world premiere of a new work nearly every year, a tradition that runs through the symphony's 33-year history. On March 1, the HSO presents the world premiere of a new commission by composer James Lee III, Alas! Babylon's Final Sunset, a program that also features Ferde Grofé's Grand Canyon Suite and Modest Mussorgsky's Pictures at an Exhibition.

"Being a part of bringing new works into the air is something I believe in," Gaylin says of working with living composers. "Not just because I think it's good for us [as a symphony]—it is—but because it's an incredibly fantastic experience."

American symphonies have historically commissioned new works from composers, but over the last decade interest in working with living composers has been renewed as symphonies look to reinvigorate their repertoires and connect with new audiences. Some symphonies create incubator programs or place calls for submissions when seeking new works. At the HSO, a community orchestra, that process is more casual, interpersonal, and organic. New commissions "sort of coalesce like a gas cloud—very cosmically," Gaylin says, and points to Lee as a prime example. An associate professor of music theory and composition at Morgan State University, Lee came to an HSO concert and afterward introduced himself to Gaylin.

"We talked a little bit, and I said I'd love to see some of his music," Gaylin says. "He sent me some scores, and it's very attractive music, very substantive, very colorful. So when I was thinking about an [HSO] program that would be very imagistic, it seemed like a very natural fit to do a piece with James."

Gaylin asked Lee if he would write a piece for the HSO, and they had a conversation about the program over breakfast about a year ago. Then Gaylin let him do his thing. "I often find that composers want a lot of guidance from me, and I try to give them as free a range as possible," Gaylin says. He'll suggest a time range—anywhere between eight and 22 minutes long—but that's about it. "I say, Write for the ensemble you want. If it's large, great. If it's not, that's fine. They might ask what style I'm looking for, and I say, Style is yours, not mine. They're always trying to pin me down, and I'm always trying to help them feel as free and loose about it as they can because most other orchestras have more constraints. At Hopkins Symphony, the limitations are the size of the stage more than anything else."

Once Gaylin gets the piece, he'll make a pass through it on the piano just to get a sense of it, and then the real work begins: rehearsals with the entire orchestra. It's not like a cold reading of a new play, where a playwright might qualify the dialogue with notes and stage directions. New scores are the results of a composer imagining a sound and trying his best to re-create it given the range of instruments in an orchestra and then notating in a series of dots and lines what to do when.

"The first couple of rehearsals I do without the composer there because it's too terrifying for them," Gaylin says, and laughs a bit. "It doesn't sound anything like they've envisioned because we don't know what to expect yet. After a rehearsal or two, when it starts getting a shape that they'll recognize, then I'll invite [the composers] in. Because otherwise, they just panic."

Rehearsals become the crucible where creative magic happens, as composer, conductor, and performers make the score sing. Sometimes Gaylin and the orchestra need to ask the composer about certain parts. Sometimes something isn't working, and they need to figure out a way to get from one part to the next. And sometimes what the composer is looking for can't be sufficiently represented in musical notation, and the composer has to articulate what he's looking for.

By the time the piece is ready to be premiered, everybody onstage has taken part in a collaborative endeavor to realize something that previously existed in one artist's head. "A composer, especially with an orchestra piece, is so much not in control of it," Gaylin says. "It's really about me the composer and the musicians trying to find ways that this piece wants to become actualized in its fullest and best sense."

The push to actualize potential also informs the HSO's concerto competition, which was started in 2008 by then undergraduate Hernan del Aguila, an HSO oboist. It was created as a chance for non–music major students to further their music studies and be recognized for their achievements. Students prepare a concerto, a piece where a soloist is accompanied by a larger ensemble, and the HSO puts together a panel to see which soloist will be featured at an upcoming concert. This year's winners perform April 26 in a program that also includes Jean Sibelius' En Saga and Igor Stravinsky's Firebird Suite (1919 version).

"I've always been a bit ambivalent about competitions, especially in a [volunteer] group like this," Gaylin says, "so the notion that we're going to pit people against each other is troublesome to me. And yet, that's how everything is done. If you're going to earn a spot in an orchestra, you're going to audition for it. That can be a tremendously powerful part of young people's education—to go for something and to see what happens."

The competition was held over 12 hours on Feb. 1, with the winners being sophomore Conor Hammonds, tuba, performing the Alexey Lebedev Concerto in One Movement, and sophomore Alice Huang, violin, performing the first movement of the Sibelius Violin Concerto.

Gaylin notes that for every HSO concerto competition, participants and winners are always extraordinarily gracious—which, for him, is just another example of what makes the HSO, and symphonies in general, such inspiring cultural institutions. "The modern orchestra is a real testament to human cooperation," he says. "And the behind-the-scenes side of that is so exciting and arduous."