Camille Henrot's 'Grosse Fatigue' on view at BMA through June 15 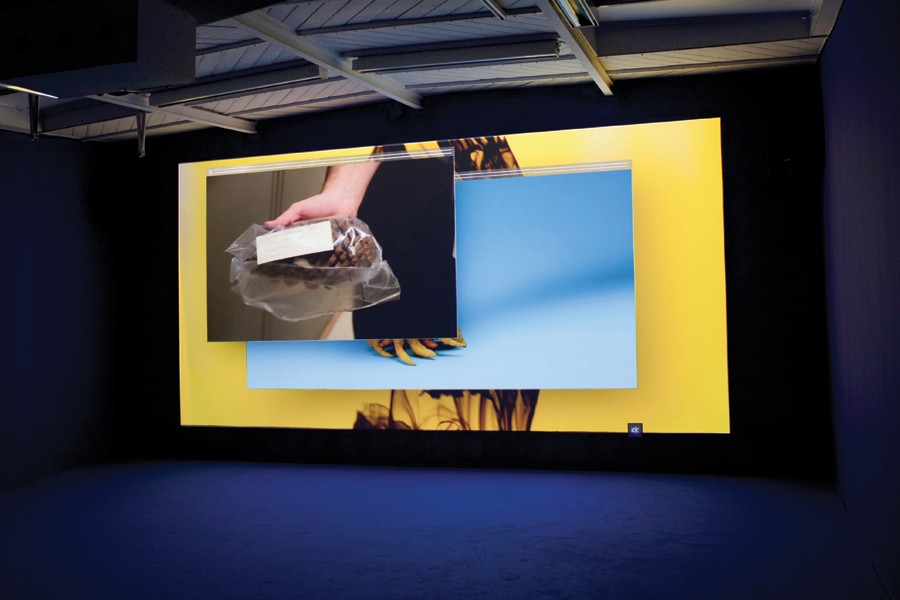 Image caption: A still from artist-in-residence Camille Henrot's video 'Grosse Fatigue,' which will be on view at the Baltimore Museum of Art from March 5 to June 15.

As a visiting-artist lecturer at the Homewood campus during the 2012–13 academic year, French artist Camille Henrot spotlighted her ability to look at Western civilization through the eyes of other cultures. She showed slides from her series that used Japanese floral arrangements called ikebana to give visual form to books written by Western thinkers and novelists. The results are gorgeously serene abstractions, a transformation not just from text to image but from one culture to another. She's interested in the way an object's meaning changes, the way information can be as pliable as artists' media. And when Henrot returns to Johns Hopkins this month as the 2014 artist-in-residence at the Center for Advanced Media Studies, she's bringing with her a history of the universe.

Henrot's Grosse Fatigue is a 13-minute video work that she debuted at the 2013 Venice Biennale, where she was awarded the Silver Lion for most promising young artist. It's a collection of images she took in the Smithsonian Institution's archives and arranged into a visual narrative of all the knowledge ever amassed in one place. It's presented as a series of pop-up windows as if on a computer's desktop, accompanied by a spoken-word text set to a hypnotic beat, creating something like cinematic Joseph Cornell boxes. Gross Fatigue will be on view at the Baltimore Museum of Art from March 5 to June 15.

The video grew out of Henrot's 2012 Smithsonian Artist Research Fellowship, which gave her the opportunity to look through one of the world's largest historical collections. Initially overwhelmed by its vastness, Henrot turned to information accumulation itself. "I was interested in the way Western civilization builds collections to write history, how civilizations have dealt with the question of memory," she says via Skype from her home in Paris. "I decided that I would work on this tradition [of building] up this huge archive of knowledge. Why do we need to do that?"

Henrot points out that institutional archives can be the result of political power, a country building its collection through colonial expansion or war. As a result, Gross Fatigue has an almost elegiac tone, as if memorializing people and things that were once here but now exist only as relics.

During her stay at Hopkins, Henrot will meet with students and faculty to discuss her work as an artist/ethnographer and stage a performance of Psychopompe, her video with live music accompaniment. (It will take place in MICA's Brown Center, at 8 p.m. on March 8 in Falvey Hall.) It's a consideration of the drifting meaning of "Frankenstein" from being the name of the doctor who created the monster in Mary Shelley's 1818 novel to now being more associated with the monster.

Since the novel is a popular nexus in feminist literary criticism, the title migrating from being more associated with the created rather than creator, text rather than author, presents a shift ripe for creative examination.

It's a work that nicely dovetails with the Grosse Fatigue's meditation on knowledge accumulation. "I wanted to explore this question of sources and derivation and alteration of myth through Frankenstein," Henrot says. "It's about storytelling and film, Frankenstein and how Frankenstein disappeared. I'm kind of exploring an approach to the knowledge of things."