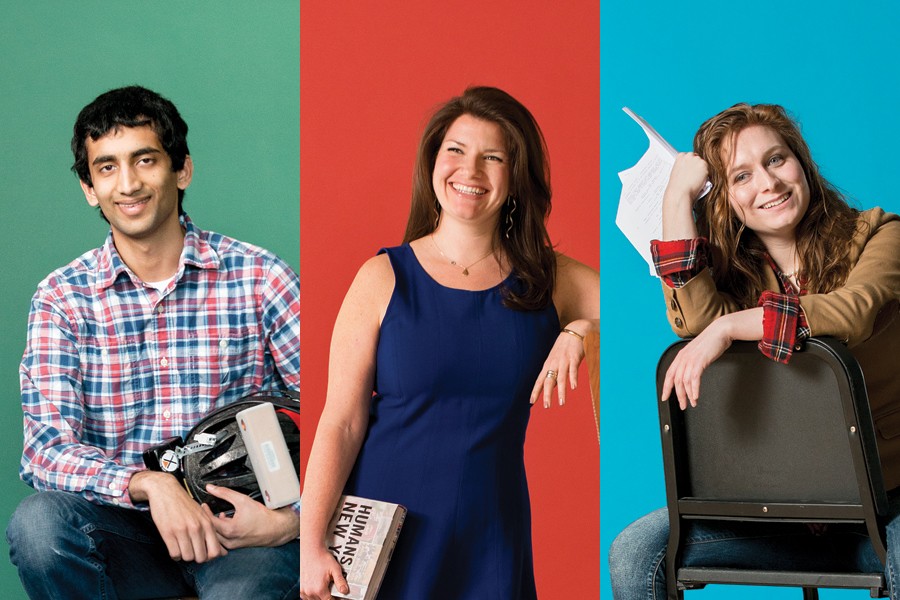 For more than three decades now, Johns Hopkins has been the far-and-away leader in national research spending among universities. In 2012, this translated into more than $2 billion funneled into medical, science, and engineering research and development.

When set against these impressive figures, the annual Provost's Undergraduate Research Awards program, which provides a few dozen students with research grants of up to $2,500, might appear less significant. But then the power of the PURA program, now in its 21st year, is not in the size of its awards but the uniqueness of its recipients being freshmen, sophomores, and juniors in the schools of Arts and Sciences, Engineering, and Nursing, and the Peabody Conservatory for whom research funding opportunities can be less forthcoming.

Through donations from the Hodson Trust, the PURA program has to date supported nearly 1,000 undergraduates in this manner, planting fertile seeds of intellectual and creative curiosity, from frontiers of technology, science, and medicine to the creative arts. Faculty mentors support each of the awardees as they engage in their original, self-driven, academic exploration. Last year 45 students received PURAs, and the results of their work will be presented at an event to be held from 3 to 6 p.m. on Tuesday, April 29, in the Glass Pavilion at Homewood. It begins with an informal poster session allowing students to display and talk about their projects. The award ceremony begins at 4:30 p.m.

A Lens on School Violence

What drives a young person to take weapons to school to mow down students and teachers? Assuredly, there is no one cause for this proliferating form of horror. Certain school shooting locations, such as Columbine, Colo., and Newtown, Conn., are now shorthand terms for this inexplicable type of tragedy.

What each of these acts of violence might have in common, however, are missed opportunities to have prevented them—warning signs ignored or misinterpreted, odd behaviors that were overlooked or unacknowledged.

"There wasn't any particular event that prompted it. It's just that there are these questions that we, as a society, have to wrestle with because these events unfortunately seem to keep happening," says Bautze, who turned to Rampage: The Social Roots of School Shootings, co-authored by Arts and Sciences Dean Katherine Newman, for some of her research. "One thing I like to do in my work is to take a large-scale social issue and view it through a micro lens: one family or one individual's experience."

The script dates back to a screenwriting class she took in 2012. The PURA support, which largely went toward equipment rental, allowed it to be produced.

What early-teen Sophie sees is her older brother Frank firing a gun and becoming increasingly angry and aloof. The siblings' widowed mother, meanwhile, is shown to have scant control over the family. Sophie wrestles with what she fears Frank might be preparing to do, and her own fear and hesitancy to confront him or confide in an adult. Their rural isolation only compounds things. Will Sophie act before Frank does?

The film was shot over three 14-hour days on a farm in Havre de Grace, Md., with a cast and crew of around 15, including two Film and Media Studies classmates, director/editor Joshua Land and cinematographer Victor Fink. For Bautze, who has written several scripts but had never filmed one, the production was an eye-opening experience.

"I think the best thing I learned was the value of collaboration and teamwork, as everyone brought something different to the table," she says. "I really only identify as a writer, and I have a vision in my head as I write. It was very interesting to see how someone's cinematographic vision differed from mine."

Director Land suggested the addition of a whole new scene between Frank and his mother to underscore their dysfunctional relationship. For Bautze, letting her written work morph as it was put before the camera was an act of trust. "It wasn't exactly as I imagined it, but it worked out very well in the end," she says. "I really got to understand the process of making a movie."

She hopes to screen What Sophie Saw at the PURA Recognition Ceremony and is currently submitting the film to various film festivals.

Texting while driving is illegal in most states because the moments in which drivers must take their eyes away from the road to send and receive messages might lead to an accident. It's a similar situation with brain surgery.

No, we're not talking about texting here but the dangers derived anytime surgeons must take their eyes off a patient's opened skull. You see, in many operating suites today, large cameras feed real-time CT scan imagery to monitors to assist surgeons in finding and removing brain tumors. The technology is helpful, but it has limitations.

"Surgeons have to look back and forth between patient and the monitor," says Johns Hopkins senior Praneeth Sadda, a computer science major. Other issues are that these cameras can be bulky and must maintain a line of sight with the patient, a restriction that can hinder the mobility of nurses and others assisting with the operation.

Sadda has been part of a team working for a couple of years on a solution to this surgery shortcoming, under the direction of Peter Kazanzides, an associate research professor in the School of Engineering's Department of Computer Science and Sadda's faculty sponsor for a PURA that allowed him to work on several improvements to the system the researchers have developed.

They call it a Surgical Navigation System with a Head-Mounted Tracking System and Augmented Reality Display. It places the CT camera on a helmet atop the surgeon's head and feeds the resulting imagery not to a nearby monitor but onto special image-displaying glasses that the surgeon wears, working similarly to Google Glass. The guiding CT imagery is right before the doctor's eyes, as is the patient's brain. And using special markers on the surgical tool itself allows the system to show in real time exactly where it is in relation to the tumor being targeted.

"A nice thing here is that instead of 2-D cross sections, this actually shows you full 4-D, and surgeons we've talked to really liked that because one of the biggest issues is how do you get depth perception when looking at CT data," Sadda adds.

Admittedly, the system itself is not much to look at, made up as it currently is of a styrofoam bike helmet with camera mounts and what appears to be a circuit board held on with tape. But this frumpy prototype has already proved its functionality in tests in which surgeons used it to successfully navigate within a cadaver's head.

"One thing was to add voice control," Sadda says of an enhancement he started working on last summer through his PURA. "It uses a menu system to control the program, and if you are already scrubbed in for surgery, you need to tell someone else which buttons to press. Voice control provides a little less worry that there will be confusion."

Sadda is heading off to medical school at Vanderbilt next year but says he wants to continue exploring the intersection between computer technology and patient care. "I see my future career as being a medical researcher where I can be on both sides."

African emigrants annually send more than $50 billion in remittances back to family members remaining on the continent, a familial cash flow that may eclipse the annual aid money that Western nations provide Africa. Also flowing in from abroad are information and advice, "social remittances" that happen every time an emigrant phones home. And while governments and philanthropies spend millions in Africa to halt the epidemic spread of HIV, Johns Hopkins School of Nursing student Willa Cochran wondered if a simpler and less-costly way to combat the disease might be derived from having a better understanding of any health advice remitted from overseas. Might a simple phone call home be a cheap and powerful pipeline for conveying reproductive health information to at-risk populations?

"I had a hunch and a lot of client accounts but didn't have anything else," says Cochran, who came to Johns Hopkins after working as a family case manager for the African Services Committee, a social service organization in New York City serving migrant families affected by HIV. (Cochran also spent three years as a Peace Corps volunteer in Guinea, where she learned to speak the West African language Malinke and witnessed the reproductive health challenges facing women and girls.)

"The point of this particular project was to have proof that this form of social remittance is occurring: People who live here are sending health information back home," says Cochran, whose PURA faculty adviser and primary investigator of the study was Nicole Warren, an assistant professor in the School of Nursing. "Once that conversation gets started, I'm very interested in finding ways to leverage this existing communication circle that is very effective and has nothing to do with international aid."

For her project she relied on the connections and trust she had formed with the women she had served through the African Services Committee. During three days of one-on-one interviews and focus group discussions with 28 immigrant women from 16 African nations, she inquired about the content of their calls to Africa and the Caribbean. The women were HIV-positive, though they didn't necessarily convey this information to their families.

"Nobody was telling anybody else that they were HIV-positive, and that could be for a variety of reasons," says Cochran, who plans to become a nurse practitioner serving the HIV community after graduation. "But they were unusually motivated to speak to their family members at home about prevention. They were also uniquely positioned to do so with authority now that they were in the U.S. because they have more social import here than they did at home."

In many cases the women were directly passing along information regarding reproductive health and safety that they had received from their health care providers. Having this advice come from a trusted family member, Cochran feels, has more power to change behavior than do slogans on billboards or free condoms.

"Humans talking to humans—this is how I think this disease is going to end," Cochran says. "If every nurse practitioner in Baltimore tells every immigrant West African woman the same information about how to advise her teenager in Africa, then we've got thousands of teenage boys over there getting the same message. That's a tremendous opportunity that costs exactly zero dollars."