Data storage expert talks about his past and the school's future 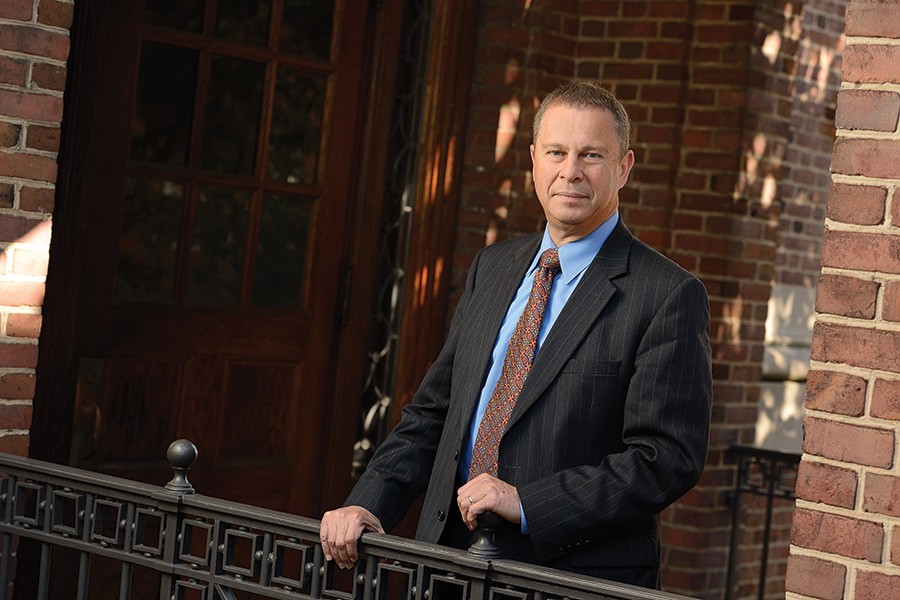 Ed Schlesinger's first computer-programming class didn't have the luxury of, well, a computer. His high school in Windsor, Ontario, couldn't afford one, so the students used an assembly language system written on cardboard cards to simulate short, rudimentary programs.

Fortunately, a neighboring school had an IBM 1130 (picture a computer not just on a desktop but as the entire desk) so the students could have marked cards shipped there each night to give the code a run through the machine.

"We would get the printouts next class that would show us our results. Maybe we'd see a syntax error because we had a comma in the wrong place and we'd have to fix the program and send it out again. So there constantly was this 24-hour turnaround to get a program to work. Not ideal, but we learned the concepts," says Schlesinger, the longtime head of the Carnegie Mellon University Department of Electrical and Computer Engineering before he joined Johns Hopkins on Jan. 1 as the Benjamin T. Rome Dean of the Whiting School of Engineering. "Those of us who were really ambitious would go on weekends to this other high school. They would open up the place so we could use the keypunch machines and run our programs."

Count Schlesinger among the ambitious ones. Plus, this was fun time.

Schlesinger says that since he can remember, he has excelled in math and science. "Not that it came easy, but I've always liked it, and I worked hard at it. You know what they say, you do well in things that you really love," he says. "It was never a burden, numbers and problems. I always thought it was fun to figure this stuff out."

For the next several decades, Schlesinger would channel his intellect and passion to carve out a distinguished career as an engineering researcher, teacher, and leader of one of the top academic departments in his field. Now he brings those many talents to Johns Hopkins, where he's looking to maintain the university's level of excellence in engineering and have the Whiting School become, in his words, "the leading engineering school in the country for the coming decades."

For Schlesinger, a career in the sciences and academia was somewhat ordained.

The son of a physicist and high school math teacher, Schlesinger says he comes from a long line of professors, including an uncle who was a philosopher of science.

"I think I made my own decisions, but looking back now I'm not so sure," he says laughing. "Science and mathematics were always swirling around my house. Invariably, it influences you."

Born in Israel, Schlesinger moved to the United States at age 4 so his father could pursue his postdoctoral work. After two years, the family moved to Ontario, living first in London and then in Windsor.

Schlesinger would major in physics at the University of Toronto, graduating in 1980, and earn his doctorate in applied physics in 1985 at the California Institute of Technology. He joined the Carnegie Mellon faculty later that year.

In college, he learned how to program computers using large and often unwieldy card decks, creating simple programs such as ones to sort lists, or a tick-tack-toe game, back when that sort of thing was considered cool, he says. This experience would have a profound influence on him.

"We were forced to understand, at an early point, the internal functioning of a computer. Now, you can get away with not knowing that. It's not automatic knowing how the hardware works when you are programming the software. There is a disconnect," he says.

In his junior year, Schlesinger worked in an optics lab at the University of Toronto, earning a third of what he had made the previous two summers doing physically demanding contracting and construction work but having the time of his life toiling with lasers to see the excited state of alkaline metal gases.

"I thought, wow, they are paying me to in essence play with all this great equipment," he says. "I knew this was the sort of thing I wanted to do with the rest of my life."

He would focus his career on condensed matter and solid state devices because he wanted to work in a field in which he could be in a small group or on his own, compared to "big physics," where he would be among a long list of authors on any given project.

As a researcher, Schlesinger has focused on solid-state electronic and optical devices, nanotechnology, and information storage systems. He is a leader in research related to the development of heat-assisted magnetic recording, viewed by many as the next-generation technology for magnetic hard disk drives. Building better information storage will be vital, he says, as many fields grapple with "big data," enormous information sets on a previously unfathomable scale.

"The challenge is that the technologies used in magnetic hard disk drives are reaching fundamental limits to scale them further down in size. Heat-assisted magnetic recording is an approach to get around those limits," he says. "But how do you heat an area that is less than 25 nanometers in diameter? You have to deliver energy to a spot that small. Not so easy."

Robert Lieberman, the university's provost and senior vice president for academic affairs, says that Schlesinger's research background will serve the Whiting School and Johns Hopkins well at a point in time when the effective collection and use of massive data sets could have profound impacts on various fields of research. The university hopes to be a leader in this effort, evidenced by the creation of its Institute for Data Intensive Engineering and Science, known as IDIES, which aims to harness the work of large teams in fields that collect massive data sets—astrophysics, genetics, fluid mechanics, environmental science, and bioinformatics, among others—and make it available to larger research communities.

"Ed's own eminence as a scholar in his field was certainly an important factor in his appointment as dean," Lieberman says. "His deep expertise in questions of data storage locate him intellectually right at the center of some of the key collaborative, cross-disciplinary initiatives here at Johns Hopkins that span other engineering fields as well as every division of the university."

At Carnegie Mellon, Schlesinger established the GM Collaborative Research Lab in 2000 and in 2007 was part of the school's team whose self-driving SUV won $2 million in a DARPA Grand Challenge sponsored by the Defense Advanced Research Projects Agency.

As an administrator, Schlesinger presided over significant growth in Carnegie Mellon's renowned ECE Department, which now has approximately 100 faculty members and an annual budget of more than $50 million. He has fostered research collaborations with top corporations and global programs in Silicon Valley, Portugal, Rwanda, China, Singapore, and India.

"The goal was to ensure that the sources of support and portfolio of activities were sufficiently diversified," he says. "I knew we had to bring in the kind of resources and facilities the students and faculty at Carnegie Mellon needed and not be dependent on one or two sources. The world is a complex place."

Schlesinger also worked with faculty colleagues to define a strategic vision for his department, led a redesign of its undergraduate program, and expanded its graduate studies. He says he plans to take a similarly collaborative approach at Johns Hopkins. All told, Schlesinger spent 28 years at Carnegie Mellon, so he didn't take the prospect of leaving lightly.

"When the opportunity presented itself to be considered for dean here, the first question I asked myself was, Would I want to be a faculty member at Johns Hopkins? And the answer was a resounding yes," says Schlesinger. "And this opportunity and privilege to be dean meant that I could assume a position of leadership and influence the future of this great school in a very positive way."

Only one month on the job, Schlesinger says he's still very much in the investigative feeling-out phase. He's been meeting with department heads, center directors, and various faculty members to get a lay of the land. "I want to know about the work they're doing, and just to listen to them," he says. "I'm not coming in thinking I have all the answers and solutions."

Later this year, he expects to hold a retreat with Whiting School leadership and faculty to begin to outline a vision for the school's path forward. While he has some ideas regarding the future vision, he says it definitely will be based on a collaborative process and focus on opportunities where the Whiting School can further partner with other university divisions.

Lieberman says that Schlesinger's personality and temperament will be effective tools as he sets forth upon his agenda.

"Ed combines a formidable intellect, an impressive track record of academic leadership, and an engaging personal style," Lieberman says. "He is very clear-eyed and focused about the challenges and opportunities facing engineering and the Whiting School but is able to put people at ease in a way that will make him a very effective leader."

One such challenge, Schlesinger says, is that the definition of an engineering education is changing. But Johns Hopkins, he says, is well-positioned to be a leader in this transformation as the factors fueling it, such as changes in our environment and the science of health care, are areas in which the university is particularly strong.