Have you heard? A cappella music is sweeping the Johns Hopkins campus 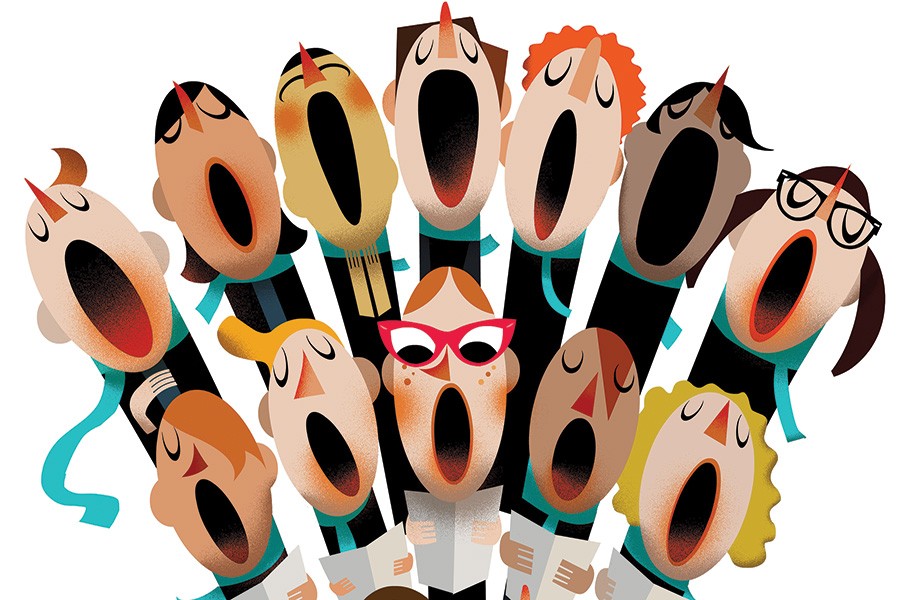 In a mostly vacant multipurpose room in Homewood's McCoy Hall, the Vocal Chords are beginning their Thursday night rehearsal with a standing massage circle. The coed group's members dig fingers into each other's backs to loosen up lungs and build camaraderie, or perhaps because it feels good. Whatever the intent, the mood is set and now it's time to fill the space with majestic voices.

"I want to start with 'I Love to Sing,' ascending," says Rachel Xian, a sophomore international studies major and alto/mezzo singer in the group. The members agree and instantly slip into the melodic warm-up exercise, accentuating each consonant and stretching vowels like taffy as the four words climb ever higher until the notes want to burst forth from the residence hall and into the nighttime air.

These undergraduates, as evidenced by their smiles, are not just singing these words—they mean every last breath. One gets the sense that the entire campus these days wants to find his or her inner Bruno Mars or Adele.

A popular but somewhat fringe activity on the Homewood campus since the mid-1990s, a cappella is having a bit of a heyday. Johns Hopkins currently boasts 11 a cappella groups—three have formed in the past two years—and early-semester auditions have turned American Idol–esque with wannabes showing up in the hundreds.

The Octopodes, the university's oldest active a cappella group and its most successful in competitions, had nearly 175 students show up for its last audition. The Vocal Chords and Sirens each had well over 130 turn out for theirs. Many hopefuls tried out knowing the odds were stacked against them, as most groups had only a few open slots up for grabs.

A cappella concert attendance also has steadily risen, with the venues for the end-of-year events filled with regulars and newly minted converts. "We had people standing in the aisles," says Nick Uebele, a sophomore biomedical engineering major and tenor/baritone with the Vocal Chords. "It's been really awesome to see. Now I get recognized by people I've never met. I've had people come up to me and say, 'Are you in an a cappella group? You're in the Vocal Chords, right?' That never happened to me before. It's really cool to see people get interested in this as an art form."

Most attribute the rising popularity of the music to the TV shows Glee and The Sing-Off and the movie Pitch Perfect, the hit 2012 musical comedy that tracks an all-female college group through the International Championship of Collegiate a Cappella, also known as the ICCAs. Overnight a generation of students wanted to sing in the hallways and show off their vocal chops on stage.

That's when the glee club nerdy stigma once attached to a cappella began to fade, says Amanda Newman, executive director of Varsity Vocals, the Chicago-based national student a cappella organization that organizes the ICCA competition, including the south region quarterfinals held in February at Johns Hopkins.

"The genre has always had something of a glamour among music people, but to others there was this feeling that it just wasn't cool. But not anymore. One of our biggest fans locally is [former] Chicago Bears lineman Edwin Williams, who has come to a bunch of our shows," Newman says. "Since Pitch Perfect came out, we've seen exponential change. Both the book [it was based on] and the movie put a cappella on everyone's radar. Eleven years ago I had to explain to others what the genre was, and it was like pulling teeth to get people to our shows. Now we're nationwide. A lot of the audiences are laypeople. It's been awesome to see the enthusiasm around the shows, and more and more people want to be in a group."

Newman says that the first ICCA competition featured five groups and one concert. Last year, the ICCAs had 50 shows with more than 300 groups competing for the title.

The a cappella tradition traces back to Yale's Whiffenpoofs, founded in 1909 by a quartet of singers that spun off from the school's glee club. It remained largely an Ivy League and New England phenomenon until the early 1990s, when it moved south and west. These days, schools as far afield as the University of Nebraska–Lincoln have multiple a cappella groups.

At Johns Hopkins, the recent trend has been the addition of culturally based groups, including Humming Jay (Korean), Music Dynasty (Chinese), and saSon (Latin American). In terms of musical genres, the university now has most of the FM dial represented with groups singing everything from pop and country to gospel and Hindi.

Eric Beatty, director of Homewood Arts Programs, says that the popularity of a cappella at the university has definitely surged over the past five or six years. He also says that the Glee and Pitch Perfect craze has trickled down to high schools, and students now enter college with a cappella on their radar.

Lara Baez got introduced to JHU's groups at the O a cappella show held during her orientation week. Baez, who was involved with theater in high school, says that she instantly found a match for her artistic outlet.

"I noticed how much fun it looked and what a good time [the groups] had performing," says Baez, a junior behavioral biology major who joined the Sirens her freshman year after auditioning for three groups.

The Vocal Chords' Uebele, who had never sung in a group or choir before he came to Johns Hopkins, says the O show also had a big influence on him. "I mean sure, I sing around the house all the time, but I hadn't had any training or vocal performance experience," he says. "I remember being awestruck for the entire performance, as it really was my first time hearing a cappella in person."

Orientation week now features three to four days of a cappella group auditions where hopefuls run through a gamut of vocal and personality tests.

Being in one of the groups requires a high level of commitment. Most meet two or three times a week, for a total of six to 10 hours. Practices ramp up to four or five times weekly as performances near. The groups typically perform at Family Weekend, Homecoming Weekend, the Lighting of the Quads, end-of-semester concerts held in the Bloomberg Center for Physics and Astronomy's Schafler Auditorium, and a multigroup concert in Shriver Hall.

Some JHU groups travel often to perform at various competitions and special events. Each year, several get invited to sing at other universities and at celebrations.

In early February, the Vocal Chords performed at ReMIXed in the Inner Harbor, part of the conference that JHU Model UN hosted for roughly 2,000 high school students. The Vocal Chords also have sung the national anthem multiple times at Baltimore Orioles home games. The Octopodes, who have made it to the semifinals of the ICCAs on several occasions, have performed in Palm Beach, Fla., for Donald Trump, and at the Embassy of Finland, in Washington, D.C.

"Our a cappella groups are probably the university's most traveled ambassadors," Beatty says. "They represent the university, and bring good music with them."

Music, after all, is what it's all about. These students clearly have a passion for singing, with many of them liberated from the confines of the car or shower.

Several students say the rehearsals and performances serve as stress relief, a welcome respite from studies.

"I love the time at practice," says Hugo Uvegi, a junior materials science and engineering major and bass/beat box with Ketzev. "It is a time we're not thinking about academics and trying to be perfect. It's fun, and that is why I was attracted to it." Uvegi and others say they love the company and friendships formed through a cappella, calling it one big happy family.

A bit of campus fame, and back rubs, what's not to like?

For those still holding out, Duncan Crystal, a senior international studies major and baritone with the Octopodes, says people should give a cappella a try as they might be surprised at what they'll hear. "They can come see people do really interesting things with their voices, and students engaged with music at a high level, at a university known more for its future doctors and engineers." 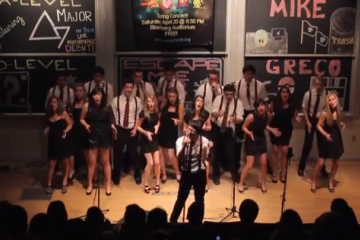