The name of late legendary jazz bassist and Peabody alumnus Joe Byrd will now be permanently associated with the school's principal jazz performance space. At a Peabody Jazz Orchestra concert on Feb. 28, East Hall was formally rededicated as Joe Byrd Hall. The renaming honors a gift made to the Peabody Institute by Elana Byrd on behalf of her late husband and herself. Their gift has also established the Joe Byrd Scholarship in Jazz Studies. 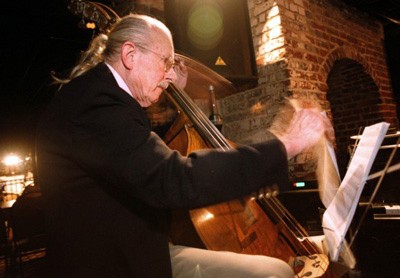 "Joe was so grateful for the education he received at Peabody," says Elana Byrd. "He always felt lucky to have such a long career doing what he loved, and in his memory I am honored to be able to help other young musicians start on that path."

Joe Byrd graduated from the Peabody Conservatory in 1962. In a performing career that spanned more than four decades, he played at the White House for Presidents Johnson, Ford, and Carter and traveled to more than 100 countries as a goodwill ambassador for the State Department. The list of jazz luminaries with whom he collaborated includes his eldest brother, guitarist Charlie Byrd; saxophonists Stan Getz and Coleman Hawkins; pianists Teddy Wilson and Mose Allison; singer Jimmy Witherspoon; and guitarist Herb Ellis. In addition, Joe and Elana Byrd produced and promoted jazz series at venues in Annapolis, Md., and Washington, D.C.

"Our students today have the benefit of Joe Byrd's influential work and recordings," says Jeffrey Sharkey, director of the Peabody Institute, "and now they also have the benefit of his and Elana's generosity to Peabody. Their gift strengthens the jazz studies program here for generations to come."