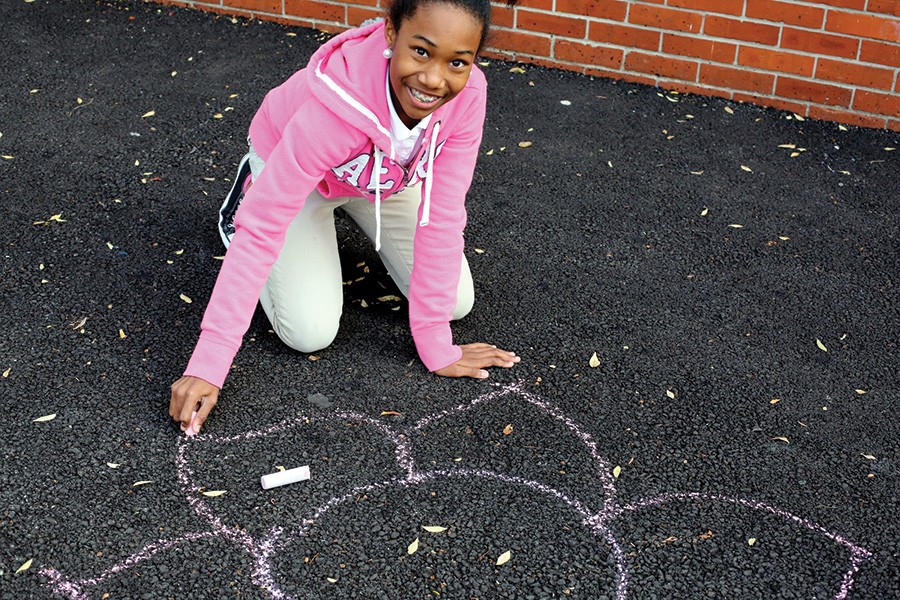 Image caption: Thanks to a grant from the Johns Hopkins Office of Community Affairs, the Greater Homewood Community Corp. has been able to revitalize a former community center that had been abandoned by the city. Today, it’s a gathering spot for people from different neighborhoods, who come together for recreational activities, homework assistance, and adult classes.

It's 10:45 on a Monday morning and the baby strollers at the 29th Street Community Center are lined up three deep. In the multipurpose room, a parent volunteer strums an acoustic guitar and belts out the Beatles' "Octopus's Garden," as approximately 30 toddlers and their parents sing along, beat on toy drums, shake plastic maracas, and jam on colorful xylophones.

Later that afternoon, a gaggle of middle schoolers will team up to build working robots with a Johns Hopkins engineering student, part of the Whiting School's Center for Educational Outreach. And that evening, community volunteers will host a yoga class, a pingpong competition, and adult computer classes.

It's a far cry from the scene just over two years ago, when this two-story red brick building attached to Barclay Elementary/Middle School, on the corner of 29th and Barclay streets, lay abandoned, a casualty of cuts to Baltimore City rec centers.

But where the city saw an expendable property, the Greater Homewood Community Corp. saw under-utilized potential. The nonprofit, which operates to strengthen urban neighborhoods in north-central Baltimore, applied for and received a $120,000, three-year grant from Johns Hopkins' Office of Community Affairs to revitalize the facility.

"It felt like a real natural for our organization, and our friends at Hopkins also felt like it was a natural fit because that building is such a significant community asset," says Karen DeCamp, director of neighborhood programs at GHCC. "If we're going to attract and retain families in the city, we've got to have places for people to recreate."

"This commitment is right out of the pages of the Homewood Community Partners Initiative," says Jennifer Mielke, director of the Office of Community Affairs, about the university program to improve the neighborhoods bordering the Homewood campus. "It supports local stakeholders, enhances quality of life, and attracts and retains families with young children. What better project to be a part of than a true community center for area residents?"

Last February the work began. Community volunteers painted all the rooms, cleaned the grounds, and renovated the building's kitchen, which supposedly resembled something out of the television show Kitchen Nightmares.

As part of Lindsay Thompson's CityLab class, MBA students from Johns Hopkins' Carey Business School were charged with coming up with a business plan to help transition the center into a self-sufficient entity within five years. Students studied the neighborhood and the facility, met with community members, and made recommendations to the community council and the GHCC.

"The students really helped us think outside the box," says Hannah Gardi, the center's director. "Coming from a nonprofit perspective, we are so used to relying on funding from foundations and grants, and the students' expertise was invaluable in helping us think through how to make this a sustainable space."

Students recommended alternate sources of income, such as room and kitchen rentals, birthday party packages, and vending machines with healthy snacks. They also set annual financial benchmarks, which Gardi says have been vital in helping the center realize its goals.

The center officially opened on May 18, with the GHCC as its operator, and so far, the building has been a locus of activity. Kids come six days a week to play games, get help with their homework, or exercise in the weight room or gymnasium, which is shared with the Barclay School. An intern from the university's Center for Social Concern helps Gardi and community volunteers supervise kids activities and classes during the day, while adults gather in the evenings for everything from computer courses to high-intensity interval training to Alcoholics Anonymous meetings.

"We talk about this idea that we want to know people in our neighborhood and build community, but you really need a space to do that," says Gardi. "People from different neighborhoods who would never have had a chance to be together are now talking together and doing Zumba together, and their kids are building robots together. They would probably never get a chance to get to know each other [without this space]. That's community building."

Mielke also likes what she sees. "I think it's already exceeded our expectations," she says. "The energy that you feel when you walk in there with all the kids … . Everybody feels like they have ownership of the space, and that's exactly what a community center is supposed to be. This is really something of which everybody can be proud."