Pathologist and father of immunology

Noel Rose, a professor of molecular microbiology and immunology at the Johns Hopkins Bloomberg School of Public Health and of pathology at the university's School of Medicine, is well-known for his pioneering studies on autoimmune thyroiditis in the 1950s that ushered in the modern era of research on autoimmune disease. He is the first director of the Johns Hopkins Autoimmune Disease Research Center, and in 2009 received the Polish Academy of Sciences' Nicolaus Copernicus Medal, the academy's highest honor. 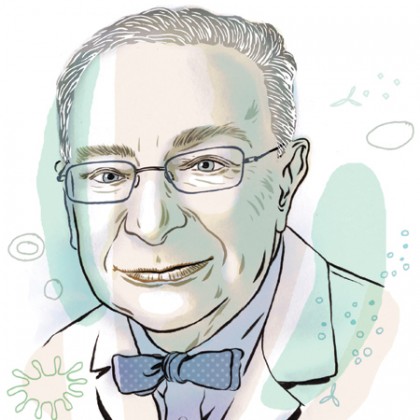 In ninth grade I knew exactly what I wanted to be. My school had the common exercise of writing a paper on what our future career might be. I wrote an essay called "The Small Game Hunter." The paper portrayed me as a microbiologist in a small New England town like Stamford, Conn., where I was born.

My interest in microbiology certainly stemmed from my seventh-grade science teacher. He owned a monocular microscope that he brought into class. The students took turns looking through it to see bacteria and other microbes. I was thrilled to learn that there was a whole world that I didn't even know existed.

The other great influence was my father. He was a physician engaged in a very busy practice. He would see patients in his office or at the hospital during the day and then would come home, have dinner, and go out again to see four or five patients at their homes.

When World War II came along, even though he was over age, my father volunteered and went into the Army as a medical officer. When he returned to the United States, he had to start from the beginning, but he built his practice as a specialist in heart disease. One of the things that my father became very interested in was rheumatic fever, which we now know to be an autoimmune disease caused by a strep infection. My father started a program to treat young people with this disease. The only treatment then was absolute bed rest. Many were athletes who could not get out of bed even to go to the bathroom. My father made a great effort to support a facility to take care of these young people and got funding from the local Lions Club. He called it Camp Lionheart. A great influence on me was seeing what impact he could have.

I admired my father greatly. He was the wisest man I ever encountered. Although I never felt any desire to become a clinician like him, I wanted to make an impact through basic research.

I wanted to spend more time with my children than my father ever could. He carried a terrible burden working as much as he did.

When I graduated from Stamford High School, I got a working scholarship to go to Yale. It meant that I had to work 20 hours a week, but I was lucky to go to such a fine university. I worked my tail off and finished in three years. I guess that I just wanted to get on with my life. I graduated from Yale in the Class of 1948, the same class as President George H.W. Bush.

I went on to Penn and also got my PhD in three years, working night and day. There I met my wife, who is the single most important person in my life. She was a nursing student at the time. We got married two days after we both graduated.

In order to get my MD, I took a job as an assistant instructor at the University of Buffalo School of Medicine. That position was about as low on the faculty ladder as one could get, but it did give me a chance to complete my medical courses. I thought I would get my MD just as quickly as I had gotten my other degrees, but I had a bit of "bad luck": I made a major discovery, and suddenly I had a research laboratory, a technician, graduate students, and grants. So it took me a long time—about 10 years.

My boss at Buffalo, Ernst Witebsky, was an extraordinary person. He was a refugee who came from Germany in the early 1930s. His interest was in immunology. He started me working on topics that he had long been interested in, organ-specific antigens. He was studying the immunologically active molecules that are unique in certain cells and tissues. He thought they might, and rightfully so, be important in the unique physiology of the cell and important in cancer. His main fame came from his work on human blood groups because he was the first to isolate the blood group A and B substances. They were important in making transfusions safe during World War II.

Witebsky suggested that I work on the thyroid gland because he had some experience in Germany suggesting that it had a very powerful organ-specific antigen. The substance specific for the thyroid is a protein called thyroglobulin. It could be denatured very easily, and Witebsky wanted me to prepare thyroglobulin in a natural state. At that time, it was assumed by everybody that an animal could not respond immunologically to one of its own proteins.

I prepared thyroglobulin from rabbit thyroid and tested it by injecting it into another rabbit. I assumed that if I prepared it well and it had not denatured, the animal would fail to respond. This looked like the pivotal test. The first results were devastating: The animal produced antibody specific for thyroglobulin. Is it actually possible that an animal can respond to its own antigen? Maybe something happened to the rabbit's thyroid gland. Under the microscope, the thyroid was severely inflamed.

Since he was so conscious of the difference between different humans in his work on blood groups, Witebsky insisted that the next step was to inject rabbit thyroglobulin into the very same rabbit. I performed a partial thyroidectomy. I took one lobe of the gland and prepared the thyroglobulin by my usual method. It was not easy to get much thyroglobulin, and I had to use a powerful adjuvant to induce immunity. We finally realized that we had essentially induced an autoimmune disease experimentally. That changed the world.

Suddenly, some of the leading immunologists came visiting to see our work. People began to say if we can induce thyroiditis by autoimmunization, maybe we can produce other diseases the same way. The toothpaste was out of the tube.

When I began, autoimmune disease was a field that was nonexistent. People thought it was a crazy idea. As we, and others, began to publish more articles, the world began to change. Autoimmune diseases started popping up all over the place.

Witebsky was a wonderful mentor and a gifted lecturer. In addition to rigorous research, I learned a great deal of teaching from him. I was also part of a small group of faculty at Buffalo who spent time investigating and evaluating the medical curriculum and working with the School of Education in improving teaching skills. I think that I went on to become a very good teacher.

The main lesson I learned is that teachers are there to serve the students, not to demonstrate their own accomplishments.

I don't much like distance education because you're seated in a dark room and asked to give a lecture but do not see the students. I never follow my outline, but I vary it according to the signals I receive from the audience. It doesn't matter if you are talking with 10 or 100 people, you are getting signals if they are receiving the information. If you learn to sense that, you can become a good teacher.

I got an opportunity at Wayne State in Detroit. They had received a large amount of money to build a medical school building with a new department of immunology and microbiology. I was able to hire new faculty and had a great time bringing people together from various institutions. We became one of the top-10 departments of its kind in the nation. When I hired faculty, I looked for potential and was less interested in their specific areas of research.

I got a call from a guy named Abe Lillienfeld, a great name at Johns Hopkins. He was a dynamic teacher and major faculty member in the School of Public Health. Previously, he was on the faculty of the University of Buffalo, and I was one of his students. He was chairman of the search committee for a department at Hopkins called Pathobiology. He told me that I might be interested. I didn't really know much about public health, but I decided to meet with Abe. I came to understand what public health really is. I thought it was something I would love to do. I'd have the opportunity to have impact, as we say, on millions at a time. That's how I came to Hopkins.

My first major discovery, of course, was on thyroid autoimmunity and we continued to work on that problem. The next major discovery was the genetic basis of autoimmune disease. We showed for the first time that something called the major histocompatibility complex contains the main genes determining the risk of all autoimmune disease. That is true in humans and animals and virtually every autoimmune disease we have looked at. I spent the decades of the 1970s at Wayne State looking into the genetic basis of autoimmunity. At Johns Hopkins, I've taken up the study of other things that impact autoimmunity, a major one being infection.

I have been funded by the NIH from the first moment I made the big discovery in autoimmunity to the present time. There are a very few people who have had 60 straight years of NIH support. I even got a Nobel nomination out of it.

We have four children, all married, and 10 grandchildren. They are my pride and joy, all doing wonderful and interesting things. Ours is a very close family. We're very proud of this, and it is mostly due to my wife.

Music has been a passion of mine, although I personally have no talent. All the boys and girls where I grew up in Stamford went to Mrs. Leonard for their piano lessons. My brother went, and he turned out to be very good. So off I went at age 7 going every week. I was just awful. At the end of one year, all the boys and girls participated in a recital, and the parents would come to applaud, but the first year, Mrs. Leonard didn't put me on. The second year, I also didn't appear in the final recital. My mother was concerned. The third year, maybe my mother said something to Mrs. Leonard; she handed me a triangle.

In school, I took part in track, but the only sport I stayed with has been tennis. My interest started in the old days, when they had Fox Movietone News between the double features in all the movie houses. They showed the king of Sweden, Gustaf V, on his birthday playing tennis at the age of 80 and then age 85 and then 90. I thought that is the sport for me. You can't play football or baseball when you're 90.