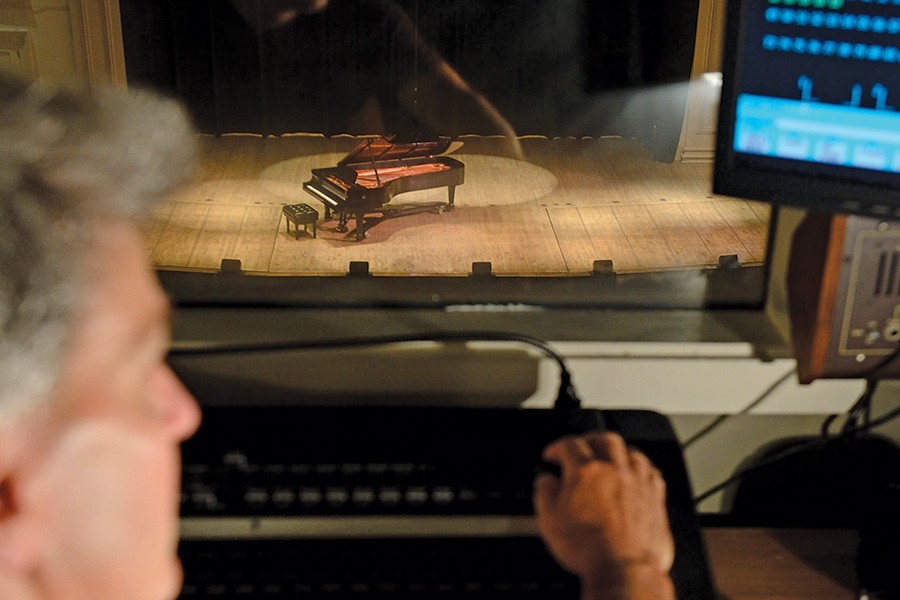 "Friedberg Hall was built in 1866, and the acoustics in here are unbelievable. Peabody renovated it in the 1980s and put in all kinds of stuff to modernize it. And they operated it for a year with all this equipment, but they didn't have someone taking care of it. So the first reason I was hired was just to be able to know how to use all this stuff, fix it if it's broken, and take care of the house. At that point, 1984, Peabody had one orchestra, a chorus, and a wind ensemble. Now, we've got some 15 ensembles, we've got three jazz ensembles, we've got two orchestras, and we do six opera performances a year. So what the job has morphed into is kind of event production. Concerts get scheduled and programs come to us and we say, 'OK, how do we make this work?'

"So I spend my time working with designers and wardrobe and prop builders and pit crew and all that to make a production happen. During the show itself, ideally I don't have anything to do. I start that afternoon opening stuff up, checking with wardrobe, doing the light check, making sure the headsets work. That gives you time to fix it in case something is broken. And then during the show if something breaks, they call me.

"We did Abduction From the Seraglio one time, and a big moment in it is when they get a ladder, put it up, and the girl comes down—they're taking her from the harem. And during the production, I get this call, 'The ladder's broken!' We've got five minutes until they need it. So we're back there with the ladder and I've got the screw gun waiting for the crescendos to go bbrrr! bbrrr!, and then they run out with the ladder and put it up. But 99 times out of 100, nothing happens.

"So in any production, you've got your artists and your production crew. The production group is reality. What is the budget? What is going to work for the audience? I do think that giving the audience a good experience is an important part of the students' education, and it's something that the performers don't always think about. They're so focused on their music and the piece and if it sounds good—and that's what they should be thinking about. They're not thinking about what it looks like from out here in the audience, about grabbing them and holding them. We have to be the intermediary between the artist and the audience."