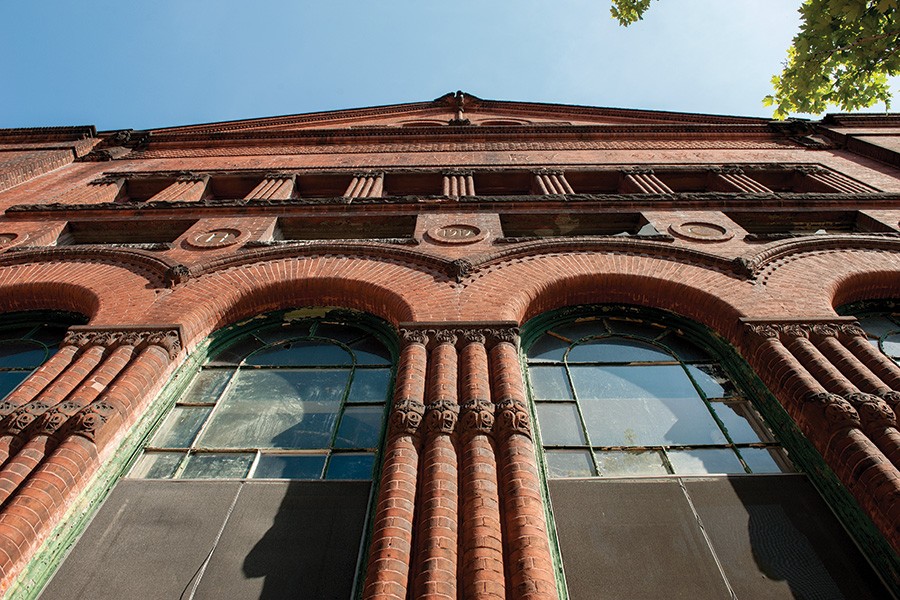 Image caption: The Hendler Creamery, for which Thompson’s CityLab class has proposed a ‘hybrid’ café as part of the historic factory’s upcoming conversion to an apartment building.

Englishman David Jones was the first European to settle in the Baltimore area, when he built a house on the east bank of a stream that emptied into the Patapsco near today's Inner Harbor. That was in 1661—back when Isaac Newton was in his first year at Cambridge, and New York City was still called New Amsterdam.

The plucky pioneer's name lives on today because that stream is now called Jones Falls (and the roadway erected over top of much of it is the Jones Falls Expressway). He is recalled, too, in an often-overlooked and somewhat downtrodden Baltimore neighborhood called Jonestown, located due east of downtown and north of Little Italy. Decades of disinvestment and shifting urban policies have left this once-thriving area a disjointed community slumbering (and in some cases, crumbling) in the shadows of more-thriving neighborhoods.

And it is here, more than 350 years after its namesake settler first broke ground, that Johns Hopkins Carey Business School students have been coming for two years now to see if they can use what they've learned in the classroom to help spur the transition of this oldest part of Baltimore into its newest vibrant and inclusive urban neighborhood.

The effort is called CityLab, essentially two back-to-back practicum courses in which students forgo lecture hall whiteboards to immerse themselves in real-world, street-level social entrepreneurship. Working with area residents, stakeholders, and institutions, they identify neighborhood strengths and weaknesses and develop strategies to capitalize on the former and address the latter. There are CityLab efforts in a couple of other Baltimore neighborhoods, too, as well as in Washington, D.C., to accommodate the many Carey students in that city. But Jonestown, within walking distance of the school's Harbor East campus, is the first and largest of these ongoing efforts.

"Medical students go on rounds and do clinics and learn to practice as part of their education, and I think businesspeople should be learning how to practice on real business projects as well," says Lindsay Thompson, an associate professor at the Carey Business School, who launched CityLab in 2012. "How do you build a place that has integrity? That is nurturing to people as human beings and fosters human connection amongst people? That has a strong sense of community and creates opportunities in a way that includes everybody? You just have to work at it—developing business models that are good for society and good for wealth creation."

And that is the CityLab mission. Thompson knows a thing or two about Jonestown since it has been her home for nearly 10 years. Much of the community's woes—particularly the sense that it lacks cohesiveness and has a dented identity—can be traced back to the 1950s, when much of its old housing stock was bulldozed to create a massive public housing complex, including multiple high-rise buildings, which were at that time viewed as the ideal solution for low-income residents. By the 1980s and into the 1990s, these "projects" were decayed, drug-plagued, and dangerous.

"Before they built all this public housing, it wasn't such a chopped-up neighborhood," Thompson says. "And then they were all taken down."

Indeed, dynamite was used to level the woeful towers in 2001, and federal money helped replace them with a mixed-income townhouse and apartment community called Albemarle Square. The new development works inasmuch as homeowners and market-rate renters are living among low-income tenants receiving rent subsidies. But such massive disruptions—demolitions, construction, populations coming and going—left Jonestown disconnected and much of its business community a shambles. And its reputation as an unsafe area persists.

Ada Goericke, who completed her CityLab work in Jonestown last fall (and received her MBA from Carey this spring) developed one possible antidote: a Jonestown heritage festival.

"You have all these different people from different economic classes with different priorities and goals trying to live in one community, and to me, the best way to help get them all on the same page is to create memories together that they can share," Goericke says. "If there is anything that really bonds people, it's expression through music, art, and food. And so we created a festival to celebrate the heritage of Jonestown in this way."

Working with a team of students and members of the community, she developed a feasibility study exploring costs and potential locations for such a festival. "I got to meet so many people in the community who wanted to see this happen," Goericke says. And it looks like it will, as the debut Jonestown Heritage Festival is slated for next year.

"We really have great assets in terms of the history and cultural legacy here that serve as mini anchor institutions," Thompson says while leading a reporter around the neighborhood. There's the Reginald F. Lewis Museum of Maryland African American History & Culture, the Carroll Mansion (the ca. 1804 home of Declaration of Independence signer Charles Carroll), and the Phoenix Shot Tower (a looming brick edifice from 1828 used to make lead shot and once the tallest building in the country). There is also an 18th-century Quaker meeting house (where Johns Hopkins himself worshiped), the Jewish Museum of Maryland (which incorporates the country's third-oldest synagogue), and the Flag House and Museum (home of Mary Pickersgill, who sewed the flag that inspired the national anthem).

While perhaps less dramatic than all of these, Jonestown is also home to what's considered the birthplace of the nation's ice cream industry: the looming and long-abandoned Hendler's Creamery, a pioneering ice cream factory partly housed in an ornate 1890s building initially built as a power plant for the city's short-lived cable car system. Thompson laments that there are "58 vacant properties within the 25 square blocks of Jonestown—and a lot of them are big." The Hendler plant is the biggest one, but it is also presently slated for conversion into 276 apartments. And perhaps also a café, if a concept developed by CityLab students comes to fruition.

Christian Montgomery, who earned an MBA in finance this spring, was on the CityLab team that last fall examined what type of eatery might work best in the redeveloped complex. In putting together a comprehensive business plan, the team conducted an extensive survey of the community and also explored the federal tax incentives for which such a project might be eligible since it is within a federally recognized distressed area.

"A big part of the community feedback was that they were looking for something that was going to empower the community and employ people in the area," Montgomery says. "They wanted an entrepreneurial investment to be an asset in the community."

The finished plan calls for what they call a "hybrid" café offering coffee drinks, breakfast, and lunch and including provisions for local youths to make inroads into the food industry as barista trainees. In the evenings, the business would trade off the historical Hendler connection to become more of an ice cream parlor.

"I think they shaped a pretty clever and unique approach for how to program a portion of the building that can be a real beacon within the project," says Brian McLaughlin, vice president of development for the Commercial Group, the Hanover, Md., company that owns and plans to develop the Hendler complex. "It's definitely something we are looking closely into."

There currently are some places to grab a bite in Jonestown, most famously at one of three Jewish delis along what's long been dubbed Corned Beef Row. But while the corned beef and pastrami sandwiches are as stacked here as any place south of New York City, it's not much of a "row" anymore. Once part of a bustling Jewish business corridor, the landmark delis are now largely orphaned among vacant lots.

CityLab has been looking at these, too. Specifically, a team has been working with the nearby B'nai Israel synagogue, whose leaders have expressed interest in buying and building on some of these parcels.

"We created a strategy to redevelop some of the vacant lots across from the synagogue, the museum, and delis into a new, mixed redevelopment project with a daycare center, early childhood education center, and residential units," says David J. Wilk, a veteran real estate consultant and former longtime adjunct professor at the University of Delaware Lerner College of Business & Economics, who is earning a Master of Science in Real Estate degree and working with CityLab, he says, as both student and mentor.

"We're taking our Hopkins students and professional and academic expertise to go into an area that does not really have the resources to hire someone and help [the community] create and advance a development strategy to the point where it becomes more economically feasible for them," says Wilk, in summing up his take on CityLab. "Lindsay and I look forward to continuing to take the strategy forward in future CityLab classes."

Rabbi Etan Mintz likes to point out that while B'nai Israel is adjacent to the Jewish Museum, it is, itself, not a dusty artifact but a thriving synagogue. While the congregation had dwindled sharply in the 1990s, it is now on the rebound.

"We've been an anchor here for 140 years, and we're just looking to take our role as community center to the next level," Rabbi Mintz says. "We have a wonderful project that we are developing with CityLab which I think will really strengthen the neighborhood."

But is it possible that Jonestown could get too popular? What of "gentrification," which to some is an undesirable concept when it comes to redeveloping Baltimore neighborhoods?

"I'm not against gentrification as long as it is not exclusive and it doesn't dislocate people," Thompson says. "You want to have property owners and people who are invested involved; you just don't want to make it impossible for people who don't have these things to function and be part of the neighborhood."

Jonestown does have a mechanism that will ensure that low-income residents remain part of the picture. Stipulations from the Department of Housing and Urban Development require that a portion of the units in Albemarle Square remain set aside as subsidized rental units for the next 30 years.