Some work, some play: A look at summer plans of Johns Hopkins faculty members 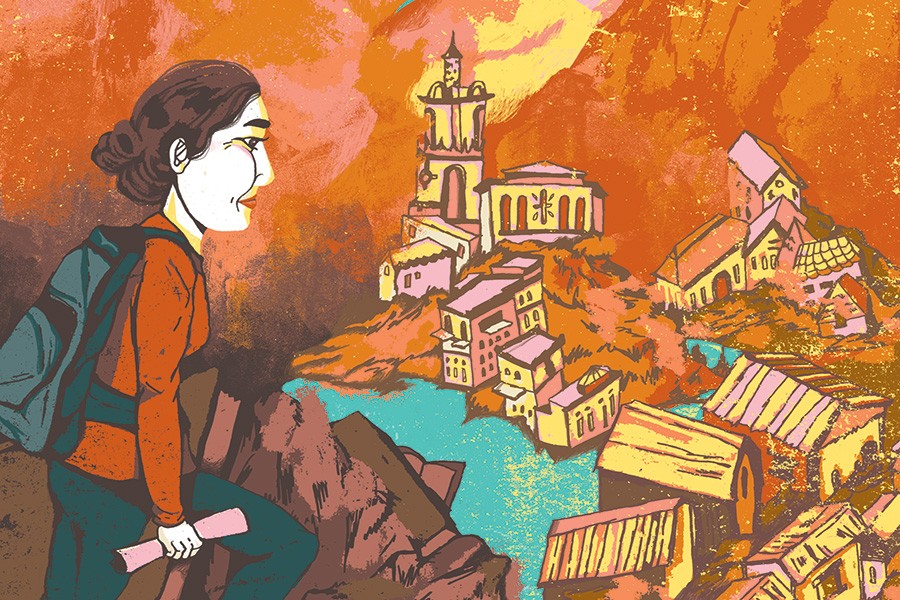 To the rest of the family, it was a visit to a relative who happened to live in New York City.

To the 14-year-old John Edward McLaughlin—a kid who would grow up to lead the Central Intelligence Agency and advise four presidents—it was a pilgrimage into the chasms of mystery and wonder.

A visit to Martinka & Co.

A mecca of magic, then on Sixth Avenue in Gotham, Martinka's was founded in 1877, endures today in New Jersey, and is believed to be the oldest shop of abracadabra in America. Once owned by Harry Houdini, the old shop was long a destination of dreams in whose fabled backroom was founded the Society of American Magicians in 1902.

"It was a dusty old place, and I wanted to see it," says McLaughlin, adding that his family generally didn't take vacations. "I was a 14-year-old wandering around the city by myself on subways visiting magic shops." McLaughlin, who served as acting director of the CIA in 2004, is a distinguished practitioner-in-residence at the Philip Merrill Center for Strategic Studies at SAIS. He is one of scores of Johns Hopkins professors taking their work on the road this summer—from conducting archaeological digs in the Middle East to deciphering the "graphic novels" of the Aztecs.

Most of the summer work is directly related to their area of expertise. But, as a magician might say, a few of the projects are switcheroos from professional practice.

Niloofar Haeri, chair of the Krieger School's Anthropology Department, will head to Iran to continue her research into Islamic prayer. Kenneth D. Rose, a professor in the School of Medicine's Center for Functional Anatomy and Evolution, is returning to Wyoming for his 45th summer of digging for remains of early mammals. Laura N. Gitlin, director of the Center for Innovative Care in Aging, will be traveling to Switzerland with School of Nursing colleague Nancy Hodgson to conduct a weeklong course in behavioral intervention research. And Jo Ann Kulesza, director of Opera Music at the Peabody Institute, early in the season conducted La Traviata in South Africa.

"We will spend three weeks in July in the Willwood Formation of the Bighorn Basin," says Rose, noting that 30 of his 45 years in the basin have been spent as director of the Johns Hopkins paleontological expedition there. "The overall goals of the long-term project are to improve our understanding of the origins and early evolution of modern orders of mammals," says Rose of the dig for remains at least 52 million years old. "We will study the relationships of these early mammals and changes in faunal diversity through time, and especially how mammal species and faunas responded to climate change through the early Eocene."

Tom D. Kirsch, director of the Center for Refugee and Disaster Response in the School of Medicine's Department of Emergency Medicine, again traveled to one of his favorite places—the Grand Canyon—to tidy up the treasure.

Good news, reports Kirsch, a native of Arizona who returned to Flagstaff to scour the national park this year for the 12th consecutive summer.

"It seems that we actually find less trash every year," says Kirsch, who works with the Arizona Mountaineering Club in the areas below the most popular viewing sites. "There's still a lot of water bottles and cigarette butts, but now it's often 'accidental' garbage: hats, sunglasses, lens caps."

Over the Fourth of July weekend, some six decades after his visit to Martinka's—where the teen acquired a talisman, now tattered, the identity of which he prefers not to disclose—McLaughlin will travel to St. Louis for an international magicians convention.

A combined gathering of the Society of American Magicians and the International Brotherhood of Magicians—some 1,200 attendees from around the world—the convention gives McLaughlin a chance to hone "close-up" magic, the kind done with a coin or a deck of cards in front of a small audience.

This is the work nearly perfected (as with the piano or Zen, magic is a "practice" in which total mastery is always just beyond one's fingertips) by Ricky Jay and Eugene Burger, whom McLaughlin greatly admires.

Jay, perhaps the greatest sleight-of-hand artist alive, is a bibliophile with one of the world's most valuable collections of magic books. Burger holds degrees in philosophy and divinity from Yale.

And McLaughlin, their self-taught, self-appointed pupil with 300 books in his collection, served for more than 30 years in the CIA.

When testifying before Congress or addressing the nation's intelligence corps during his four years as the agency's deputy director and as acting director, McLaughlin often had an audience of hundreds.

When the hand must be quicker than the eye, he prefers a handful.

"The kind of magic you perform for three or four people, that's what I'll focus on most [at the convention], and I'll also watch the competitions," says McLaughlin.

Study and practice can turn the average person into a somewhat competent magician. Add a pinch of talent to more study and more practice and you get a good magician. What is the magic dust that can transform a good magician into a great one? The same qualities, says McLaughlin—who gave up music for magic at 12 and now and again performs at county fairs—that make for the best teachers.

"It's the thoughtfulness and care you put into it," he says. "At its crudest level, it can be seen as a puzzle in which you are showing you are smarter than someone else."

Working as McLaughlin the Magician (sans lovely assistant), he presents the ancient "cups and balls" trick—versions of which go back thousands of years, with modern roots in the 12th century—as a history lesson.

"I try to present it in a way that engages the audience in a story—to elevate it to something more meaningful than a mere trick," he says. "I'm pretty good, but there's so much more to learn. You work on it forever. It's a discipline, like martial arts or music, but a head game."

The minds of the aged—the elderly among us, those susceptible to falls or failing vision—are at the heart of this summer's work, indeed the life's work, of Laura Gitlin, a native Philadelphian who cherishes long-ago holidays filled with art and dance. "I went to summer camp in the Poconos for four or five years in a row," says Gitlin, who used her time making ceramics and pursuing a career in dance until a back injury put her on another track.

The path that opened for her was sociology and, as an applied research sociologist, she has conducted team research for nearly 30 years to identify ways to support older adults and their families' quality of life at home and in the community.

"When I began this work on older adults living at home with functional difficulties, there was very little understanding of their daily life challenges," says Gitlin. "There are still tremendous gaps in understanding what it means to age and accommodate psychological and health changes. We focus on developing meaningful behavioral interventions, and classic clinical trial texts do not cover the issues relevant to this type of research."

In Basel, where the workshops led by Gitlin and Hodgson for 40 people begin in mid-August, discussion will cover topics across the spectrum of aging, including those concerning people living longer with the HIV virus and the negative side effects of ways in which geriatric health problems are treated.

"It's a two-way street of information sharing," says Gitlin of the summer research institute that she and her colleagues conduct here at Hopkins and in Switzerland and which include physicians, psychologists, occupational therapists, nurses, and students from a broad range of disciplines. "Our participants bring new knowledge and identify new areas for which behavioral intervention research is needed."

Much of what Gitlin has learned is included in Behavioral Intervention Research: Designing, Testing and Implementing, co-written by University of Miami Professor Sara Czaja and due out next year from Springer Publishing of New York. Hodgson, who will lecture in Basel with Gitlin, is also contributing to the book.

While there remains much to be accomplished in the development and testing of behavioral interventions for older adults—"we do have the know-how," Gitlin says—it is her hope that the ground being broken through her forthcoming book and the summer institutes "will help the next generation get it right."

As Gitlin and Hodgson were preparing for their trip to Switzerland, Jo Ann Kulesza was returning from Nelspruit on the Crocodile River in northeastern South Africa.

To skip a stone along the Crocodile is a far throw from Belle Isle on the Detroit River, where the young Kulesza spent many a summer day with her maternal grandparents.

"My grandfather John was an avid fisherman, and we marveled at how he cast the heavily weighted line and tackle nearly half the distance to Canada [across the river]," remembers Kulesza.

Music has taken the conductor from there to here and back again, with work in Costa Rica; Alaska; Salzburg; Moscow; many cities in Italy, Germany, and France; and that country across the Detroit River that seemed just beyond her grandfather's lure.

And this is why her summer journey to Nelspruit was so much more than the adventures of a tourist.

"There is virtually no classical training nor ongoing performing organization in that part of the country," says Kulesza, save for a sole chamber music association founded by the South African Walter Fourie.

Opening night of La Traviata was sold out; the next day, just about.

"Someone said that the death and decline of the arts is the death/decline of a society," says Kulesza. "The arts lovers in Nelspruit are intent on making sure that doesn't happen."