The United States currently faces a growing epidemic in the form of prescription drug abuse, according to President Bill Clinton and expert panelists who gathered on May 13 at the Johns Hopkins Bloomberg School of Public Health for a town hall discussion co-hosted by the school and the Clinton Foundation's Health Matters Initiative. 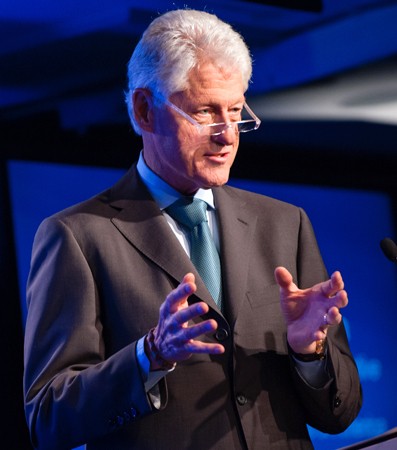 The event was held on the one-year anniversary of the Clinton Foundation's announcement of its intent to address prescription drug misuse.

One person dies every 19 minutes in the United States from a drug overdose, now the leading cause of death among those ages 25–44, according to the Clinton Health Matters Initiative. Prescription drug overdoses now kill more Americans than heroin- and cocaine-related deaths combined, and the death rates have more than tripled since 1990.

Clinton spoke passionately about his personal connection to drug-related tragedy, detailing the deaths of two men, ages 30 and 32, who took OxyContin after a night of "five or six beers." One of the men worked for his wife, Hillary Clinton, in the State Department; the other was the son of an Albanian immigrant who lived across the street from the Clintons.

"Both of them were given these pills by their lady friends who were totally ignorant of the biochemistry that was going on. It was just about, This will give you a buzz," Clinton said. "And it did, after which they fell asleep and never woke up. Neither of them were addicted to prescription drugs. And neither of them were trained enough in human biology to have any clue that they were about to deaden the portion of the brain that told them to breathe while asleep."

Clinton admitted his ignorance of the prescription drug abuse epidemic before these events.

"I wondered how many other people are dying, whether from addiction or ignorance," Clinton said, "and we began to do what we could."

Specifically, the foundation worked with the pharmaceutical industry and others to improve the supply and affordability of naloxone, a drug used to counter the effects of opiate overdose. In April, the FDA approved Evzio, a prescription treatment that can be used by family members or caregivers to treat a person known or suspected to have had an opioid overdose. Evzio rapidly delivers a single dose of naloxone via a handheld auto-injector.

Clinton said that more can be done to drive down the cost of such lifesaving drugs and distribute them more efficiently. The Clinton Health Matters Initiative aims to save more than 10,000 lives over the next three years by cutting in half the number of young people who misuse prescription drugs.

"There are a lot of lives riding on this," Clinton said. "And if the trends in what we're seeing in heroin continue, there could be more [deaths]. I'm assuming we've got this problem. I'm assuming we have a lifesaving answer. And I know we don't really have a clue to how to get that lifesaving answer to all the problems in time to save all of these lives. That's what I'm obsessed with, so if you can help us in that specific way, I would be very, very grateful." Bloomberg School Dean Michael Klag, who introduced Clinton and thanked him for his leadership and vision in helping convene this discussion, said there are no easy answers.

"We recognize the inherent challenges in making a coordinated, thoughtful, and effective public health response," Klag said. "It's in the area of research that Johns Hopkins can make the most impact. Through our Center for Drug Safety and Effectiveness and our Center for Injury Research and Policy, we are working to amass and disseminate the scientific knowledge and data that will help us create new approaches to this problem."

The event was the first of an ongoing collaboration between the Johns Hopkins Bloomberg School of Public Health and the Clinton Health Matters Initiative to explore public health issues and solutions. The town hall brought together thought leaders from around the country to share ideas and energy as they apply evidence to inform action.