Today the Truro School is a private co-educational institution in Cornwall, England, of just over 1,000 students ranging in age from 3 to 18. In 1938 it was still an all-boys school. That was the year it invited one of the most celebrated modernist poets of the time to come give a talk on Speech Day. His name was T.S. Eliot. 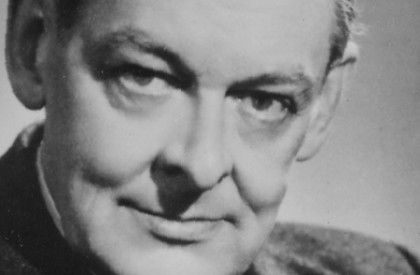 Just what he said might have been lost had it not been for Ronald Schuchard, an English professor at Emory University, Eliot scholar, and series editor for the eight-volume The Complete Prose of T.S. Eliot: The Critical Edition that the Johns Hopkins University Press is co-publishing with Faber and Faber, the British house where Eliot began working in 1925 and spent the remainder of his career.

Schuchard says that since Eliot's death in 1965, roughly 90 percent of his prose has been out of print and unavailable to literary scholars. Some of it was kept in files maintained by Faber; some was maintained by Eliot's second wife and widow, Valerie. In 2006 the Press received a $750,000 gift from the Hodson Trust to support the research and editing of this massive literary archive, with Schuchard providing the editorial direction.

He spent the 2006–2007 academic year on a Guggenheim Fellowship in England, bouncing back and forth between the archives of Faber and Valerie Eliot, tracking down missing writings. And in one of the Faber files he found a gracious letter to Eliot from the headmaster of the Truro School. "It's just a thank you letter," Schuchard says, but it led him to write to the headmaster asking if there might be any record of Eliot's visit. "A couple of weeks later came the Truro literary magazine with [Eliot's] address and a picture of him in the gown and all the masters behind him. It's just a wonderful essay.

"He gave scores of such talks," Schuchard continues. "I'm still writing to schools, and I've turned up three addresses that are in the literary magazines of school boys. Many of the other things that he would do in the evening were for the benefit of charities. He would go and speak at a fundraiser and give a paper on an important topic, and then he would just hand it to his host as a memento. So it's been a great detective process of going out into the world and finding and retrieving these fugitive essays."

The first two volumes of this massive online undertaking come out this month. The first, subtitled Apprentice Years, 1905–1918 (co-edited with Jewel Spears Brooker), collects Eliot's earliest known writings, from his student papers at the Smith Academy in St. Louis, where he was born; to those of his Harvard University career, including his undergraduate papers and notes, 26 unpublished graduate essays, and his doctoral dissertation; to two years of various reviews following his move to London in 1916. The second volume, The Perfect Critic, 1919–1926 (co-edited with Anthony Cuda), finds Eliot maturing into a formidable thinker and writer. This volume contains reviews he wrote for the Athenaeum literary magazine on a variety of topics, as well as the early years of the Criterion, the journal he founded in 1922 and which included his landmark "The Waste Land" poem in its debut issue.

"He was becoming one of the most influential critics and poets in England and America at that time," Schuchard says. "His reputation was growing very rapidly."

Schuchard says that gathering Eliot's unseen prose into one place is only going to expand appreciation for his writing and ideas. "Having access to all of this material, much of which I had never seen, has just opened up a whole new level of perception [about Eliot]," he says. "Nothing had really changed in Eliot criticism for many years because this material was not accessible. As these volumes start coming out, the reading and scholarly public in many fields are going to discover essays on topics that he wrote not only on literature, poetry, and criticism but on religion, humanism, culture, economics, world politics, education—on a spectrum of topics that show how fully engaged he was in the world. It's eventually going to be one of the most complete literary archives ever assembled."

Schuchard has spent the better part of his career inadvertently preparing to oversee this enormous undertaking. He first met Valerie Eliot in the early 1970s, when he was a young professor and asked her if he could read her husband's Clark Lectures on metaphysical poetry, which he presented at Trinity College, Cambridge, in 1926. She let him, providing that he didn't quote from them or publish any part of them, stipulations by which he abided. He sent her a letter thanking her for the privilege and didn't hear from her again until 1987, when she wrote him saying that she remembered his thoughtful letter about her husband's Clark Lectures and wanted to know if he would edit them. Schuchard edited both those and his Turnbull Lecture given at Johns Hopkins in 1933, and they were published in 1993 as The Varieties of Metaphysical Poetry.

Nearly another decade would pass before Schuchard would approach Valerie Eliot about the remainder of her late husband's archives. In 2000 he gave a talk at New York's bibliographic society, the Grolier Club, wherein he mentioned that only 10 percent of Eliot's prose is available. William Warren of the Hodson Trust was at that talk, and he approached Schuchard about the possibility of working with the JHU Press to assemble Eliot's prose works. In 2004 Schuchard again went to see Valerie, asking to see a file about Eliot and poet Ted Hughes, about whom he was writing at the time. In that file, he found a letter to her from Hughes in which he expressed how important her husband had been to him as a writer after she released the first volume of his letters in 1988. Schuchard showed it to her, asking if she remembered it.

"It said, 'Dear Valerie, Now that you've let us have the letters, would you please let us have the prose?'" Schuchard recalls. " I thought she would just smile and say nothing, but she said, 'Yes, I think it's time. And I need some help.'"

In 2006 Schuchard started working in both Faber's and Valerie Eliot's archives, gathering and organizing materials and filling in bibliographic holes, and then reaching out to other scholars to serve as co-editors on individual volumes, two of which will come out every year through 2017 and be available through the Press' Project MUSE.

"For me, it's a historical privilege to be an editor of Eliot's work and to have had the friendship and trust of his second wife," he says, noting that Valerie Eliot died in 2012, and Warren, so instrumental in the Hodson Trust's funding the project, in 2010. "I've retired so I could devote myself full time to it, and one of the motivating factors is that so much of the work of a great writer has not been accessible that I'm driven to get it out. It will have a transformative effect on the perception of Eliot. I've come across things that I wanted to stop and write about but, of course, I can't. I have to discipline myself and say, Somebody else will write about that."