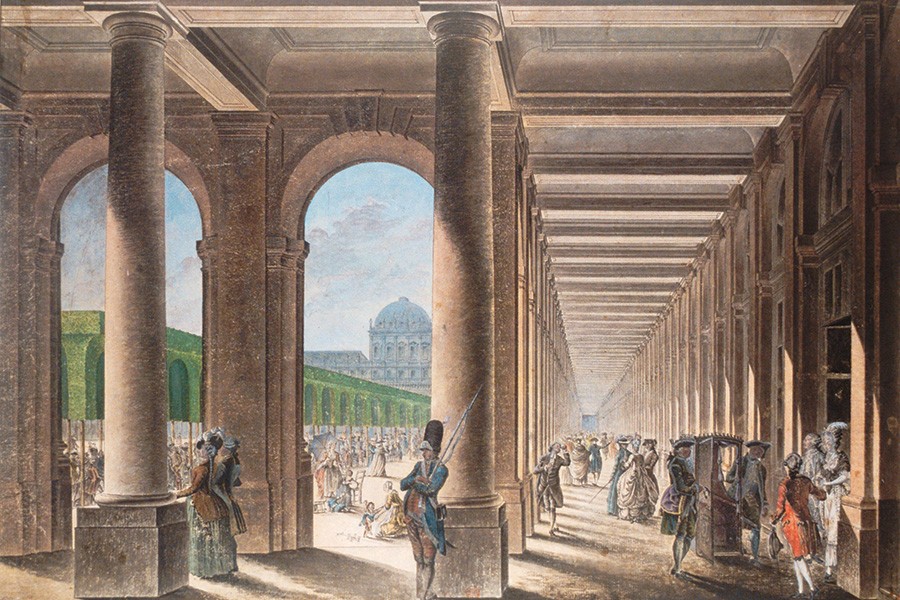 Image caption: In ‘When the United States Spoke French,’ author François Furstenberg uses this 18th-century drawing of the galleries and gardens of the Palais Royal to illustrate the life that the Frenchmen in Philadelphia had left behind.

François Furstenberg, an associate professor of history at Johns Hopkins, got to know Charles Maurice de Talleyrand-Périgord in a peculiarly intimate way. The celebrated late 18th- and early 19th-century French diplomat best known simply as Talleyrand was born in 1754 into one of France's oldest noble families. He was stirred by the political philosophy of the Enlightenment and believed in the potential of the emerging modern citizen. He contributed to the Declaration of the Rights of Man, a cornerstone document in the French Revolution. He advocated for public education. He lived to be 84, and he spent a good part of his life as one of the shrewdest European diplomats of the era, somebody who didn't simply see all the angles developing between countries, politicians, and businessmen but knew how to play them.

Furstenberg exhaustively explored a small window of that long life while researching his new book, When the United States Spoke French: Five Refugees Who Shaped a Nation (Penguin Press). Talleyrand spent four years in the 1790s in exile, his ties to the ancien régime branding him undesirable during the radicalizing September massacres of 1792 in France. He lived two of those years in the United States, a fledgling nation just coming out of a revolution itself. There, he settled in Philadelphia, the nation's capital and its largest and most cosmopolitan city, where he encountered a large French population—both progressively minded noblemen like himself forced into exile and refugees feeling the turmoil in the French Caribbean. He was a consummate social networker, fraternizing with fellow French noblemen and America's emerging elite, among them Pennsylvania privateer William Bingham. Bingham's wife, Anne, daughter of the first president of the Bank of the United States, entertained Philadelphia's political, business, and intellectual social set, and Talleyrand was frequently invited. He was received by Pennsylvania senator Robert Morris (who helped finance the American Revolution) and became friendly with Alexander Hamilton.

"He's really a brilliant character," Furstenberg says of Talleyrand. "He's always got a ready quip, and he makes the most penetrating observations about the United States." Furstenberg quotes one of those observations in his book, a remark that is as accurate today as it was then: "There is a lot of money to be earned here," Talleyrand said of America in a letter to writer and salon hostess Madame de Staël, "but it's for those who already have some." Talleyrand is frequently the most trenchant wit in When the United States Spoke French, and it's easy to see what drew Furstenberg to follow him and the book's other liberal noblemen—Constantin François de Chasseboeuf, comte de Volney; François Alexandre Frédéric, duc de la Rochefoucauld-Liancourt; Médéric Louis Élie Moreau de Saint-Méry; and Louis-Marie, vicomte de Noailles. Their stature provided a wealth of primary materials through which to comb. They were written about, penned letters that survive today, were talked about in the correspondences of others, and were involved in business transactions, land deals, and political diplomacy. They dined and gossiped with men who would be called America's Founding Fathers and with their confidants. These Frenchmen left behind a record of their time that Furstenberg could explore to reconstruct a picture of the political lives of French émigrés in late 18th-century Philadelphia.

At least, that was the book he planned to write.

The problem was that the picture that emerged was much more complex than the historian imagined. The book kept "threatening to explode on me," Furstenberg says, followed by a laugh. "At any particular moment, probably any one of its chapters could have been a book itself. I kept moving in different directions—toward art history, toward material culture, toward the geopolitics of Louisiana and Haiti. And then I kept trying to return to the five French émigrés to make it hang together in a narratively coherent way, to use their stories to try and make it as biographical as possible. And I kept failing at that. So the only way of trying to make it hang together was to move back and forth between these themes that kept exploding on me and an attempt to keep their stories sort of manageable."

The result isn't just manageable; the book is a fascinating examination of the United States at a pivotal moment in history that is as broadly sweeping and narratively captivating as a historical novel. Furstenberg introduces the geography of Philadelphia in the 1790s by providing a bird's-eye view of the city as seen by Jean-Pierre Blanchard, who in January 1793 rode a balloon-elevated craft for 46 minutes from the city center to about 15 miles east. Furstenberg comically relates how Talleyrand, while exploring Maine as he was considering a land purchase, was mistaken for a fisherman's daughter's illegitimate son. And Furstenberg's accounts of Philadelphia's social life are rife with intrigue as he recounts the making of trade deals, political considerations, and land speculation.

This synthesizing of historical information is what makes When the United States Spoke French such a gripping read. What makes it such a revealing one are the intimate narratives he weaves around the historical stories—particularly the political and economic forces that would shape the United States in the 1800s, the connection of vast American land and its slave labor to European capital, economic alliances with Great Britain (the country from which it had just fought to free itself) through British banks willing to grant credit to Americans, and the United States' ongoing reliance on slave labor following the uprisings in Saint-Domingue, the French colony that became Haiti in 1804.

"I realized you can't write a book about France and the United States without talking about England and the Caribbean—they're just necessary characters," Furstenberg says. "There is no direct, unmediated relationship between France and the United States that doesn't somehow involve Britain. And the Caribbean is the center of the Atlantic world's economy."

Furstenberg, however, is able to explore those larger historical forces through personal narratives, to illustrate how these larger events take place from the ripples caused by interactions between people. "It was possible to write a much more textured story around these guys because they left so many traces," Furstenberg says. "There's a kind of narrative tension where I tell the story through them, but it's not fundamentally about them. It's about these historical processes, but they become useful to show how individual lives interact with these larger processes."