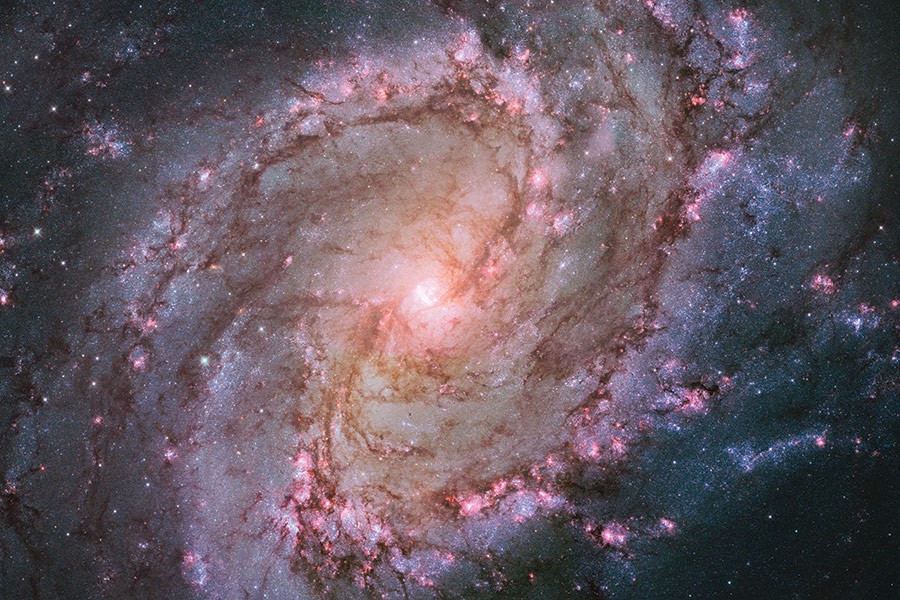 "After 22-plus years of stunning images from the Hubble Space Telescope, one might think astronomers like myself might be running out of new ideas or new things to observe, but nothing could be further from the truth. Since its refurbishment by astronauts on the space shuttle in May 2009, Hubble has been performing better than ever, and new results continue to amaze and delight.

"This spiral galaxy Messier 83 is located some 15 million light-years distant in the southern constellation Hydra. That this staggeringly large number indicates this galaxy is 'fairly nearby' in astronomical terms is just one of the things I love about astronomy. Nature has been kind to us by arranging our view to be nearly face-on to this spectacular spiral galaxy, providing an ideal laboratory for inspecting the ongoing processes of star formation and stellar death that combine to make the galaxy what it is.

"Over the years, Hubble has observed various small portions of M83 but has only recently produced this more global perspective. This image, just released by the Hubble Heritage Project, shows a mosaic of six separate camera fields covering the inner portion of the pinwheel. As with most Hubble images released to the public, this 'image' was actually made using some 90 individual exposures through five color filters. Hot, young stars glow bluish-white, while older and cooler stars look orange or red. The center of the galaxy glows brightly from a tremendous burst of new stars forming. Glowing clouds of red hydrogen gas surround the regions of most active star formation in the spiral arms, while delicate tendrils of brown interstellar dust swirl through vast regions of interstellar space, all revealed by the exquisite eye of Hubble.

"Of course, to my collaborators and me, this is much more than just a pretty picture. Nature does not always like to share her secrets. It has taken several years of planning and effort to obtain and process these data as well as data from X-ray and radio telescopes. Now, finally, over the coming year we will be able to delve into the details hidden within these data sets to better understand what makes galaxies tick. It should be an exciting time."

William Blair is research professor in the Krieger School's Henry A. Rowland Department of Physics and Astronomy.