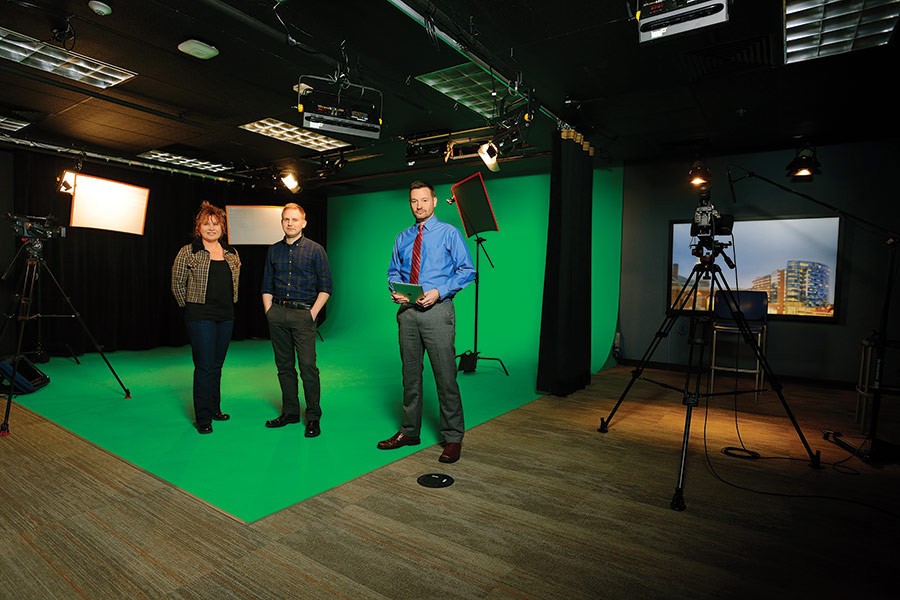 Still settling into their new home in the Keswick complex, staff at the Johns Hopkins Office of Communications now have something else new to get used to: electronic signs reading On Air above several doorways. When they're illuminated, someone on the other side is appearing live on NBC, CNN, the BBC, or some other media outlet.

The doors lead into the Johns Hopkins University Video Studio, which opened last month with the aim of ushering in a new era of video capabilities and outreach.

"We have such a wealth of experts on our campuses, and this lets them reach a much wider audience," says Len Turner, the university's new director of video strategy.

Broadcast outlets frequently reach out to Johns Hopkins faculty and administrators for input on stories. Until now, however, getting them on the air wasn't always easy. The School of Medicine has a small video space that could be used, but as often as not, filming was done in offices under problematic lighting and sound conditions. With the opening of this 1,000-square-foot studio, with soundproofed walls and the latest technology for patching into the networks, putting Johns Hopkins people on air has never been easier. There is even a special sound booth for radio interviews and audio recording.

Beyond its broadcast capabilities, the studio has facilities, lighting, and multiple cameras for all types of video production. There is a large green screen, allowing creative backgrounds to be inserted into video projects. Parts of President Ron Daniels' recent end-of-year thank you video were shot here.

"There is a new focus on the strategic use of video," says Turner. "It's not about producing individual videos but developing a strategic plan for how we use video, who the audiences are, and how video benefits the university."

The studio is a resource for the entire university, and faculty, staff, and students interested in learning more about its use should email video@jhu.edu.

"Once the word gets out, I think the Hopkins community will come up with many creative ways to use it," Turner says.