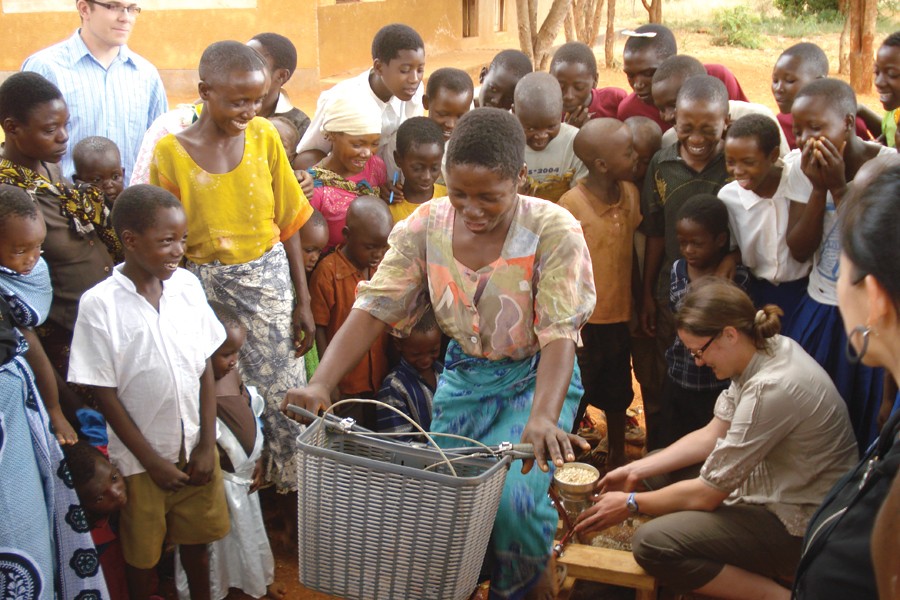 Image caption: A woman from Segeli, Tanzania, operates a pedal-powered grain mill while Jeannine Coburn, seated, adjusts the plates to alter the coarseness of the corn product being produced.

The riverside village of Nazaçu appears on preciously few travel itineraries and barely registers on any map. But in the summer of 2012, Nate Nicholes, a doctoral student in the Whiting School's Department of Chemical and Biomolecular Engineering, found himself with a group of Johns Hopkins faculty and students cruising down the Brazilian Amazon to this remote portion of the world. 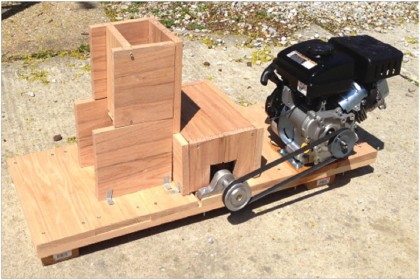 Nazaçu was the group's second stop, a fishing village of fewer than 100 people that consisted of a church, a school, a single row of homes on stilts, and a community gas-powered mill used to grind cassava tubers into raw flour.

For the villagers, the mill had become both indispensable and a scourge. To grind the cassava, a hard dense root and a staple of the villagers' diet, mill operators fed the tubers by hand into the machine's mouth toward a grinding wheel armed with sharp blades. Hand nicks and cuts were commonplace, and some users lost fingers. The mill also produced a blizzard of flying debris known to cause injuries to eyes and face, with anecdotal reports of blindness. All this for a population without direct access to a trauma center.

The villagers wanted a safer machine, but buying a new mill was not an option because of both lack of funds and a reluctance to use a device that needed to be frequently serviced or repaired, as the nearest major town was an hour away by canoe.

Nicholes saw a problem worth solving. In other words, he got just what he came for.

Nicholes' trip to the Amazon was funded by the Global Engineering Innovation Program, founded in 2011 and hosted by the Johns Hopkins Institute for NanoBioTechnology. The program, seeded by a grant from the Office of the President, annually supports teams of Johns Hopkins students as they investigate and tackle engineering challenges in the developing world.

Jennifer Elisseeff, the program's director and the Jules Stein Professor of Ophthalmology at the Wilmer Eye Institute, says that the GEI's design resembles that of the university's chapter of Engineers Without Borders but is more targeted to graduate students who can dedicate more years to a project. Students form in teams of two to four with a JHU faculty mentor and a mentor at the host site.

"The program is open to undergraduates, but the graduate students bring an added level of maturity and experience to these projects, and for their part they get this international exposure and an opportunity to test their academic acumen," says Elisseeff, who is also a professor of biomedical engineering.

In a sense, the journey on the Amazon River began with a chance meeting at BWI airport between Elisseeff and Peter McDonnell, the William Holland Wilmer Professor of Ophthalmology and director of the Wilmer Eye Institute. Elisseeff was bound for a meeting in Colorado and McDonnell for a conference in California. In the course of their conversation, McDonnell told Elisseeff about his upcoming trip to Brazil.

McDonnell, who has trained a number of young Brazilian ophthalmologists, had learned of the many health issues that face the people who live in remote areas of the Amazon River basin.

"They are quite isolated and are vulnerable to eye diseases that have been mostly eradicated in the rest of the world," McDonnell says. "Our mission was to go in and do an assessment of the population there, and then give advice to the Brazilian government's Ministry of Health and see what could be done to help the population."

Elisseeff asked McDonnell if he would be willing to let some graduate students accompany him on the trip. "She shared with me that she had some brilliant young students eager to help in a situation like this," McDonnell says. "I shared the invitation with my colleagues in Brazil, and to say that they were thrilled and delighted would be an understatement."

In particular, Elisseeff had Nicholes in mind, as she knew he spoke Portuguese and had previously worked in Brazil as a missionary.

Once teams, mentors, and challenges are defined, the team or team leader travels to the site to further evaluate the challenge and design constraints.

In this case, Nicholes says he went to the Amazon open-minded and aware of only the particular villages that they would be visiting.

"We were there for 10 days, and that first trip was to evaluate the current situation and see if they had any interest in changing how they did things," he says. "The mill turned out to be the best challenge since it met our engineering skill set and was associated with these acute injuries."

He describes the mill as something akin to a small wood chipper powered by a five-horsepower engine that grinds the cassava into a coarse flour that can be made into cakes and used as a topping on rice, beans, and fish.

"This mill design has been used for 100 years and used to work on a flywheel operated by two people, but only in modern times has it been powered by a gas system with blades that spin much faster," Nicholes says. "We wanted to retrofit this mill so that the operators wouldn't need to manually feed it."

The team set out to create a hopper system to increase both productivity and safety. The students returned to Baltimore and worked on the project for several months, meeting mostly on weekends. They drew up plans and re-created the mill in a basement space in Homewood's Wyman Park Building to make the modifications. Their solution was a wooden vertical chute with a ramp that directed the tubers into the grinding wheel but kept hands and face clear from danger.

They revisited Nazaçu in June 2013 to make the modifications to the mill and share the design with other communities. Based on feedback from the villagers, the team is now working on a design to maintain constant pressure on the cassava tubers to produce a more uniform flour. On the trip, the students also went to the capital city of Manaus to present their mill modification plans to the secretary of agriculture.

"The modifications we made were very simple, but we think they can make a big impact," Nicholes says. "Not only do we think it's safer, but they can harvest more flour than ever before. It's a timesaver." McDonnell says the mill has great potential.

"I'm a physician, and one thing we know is that often where there is poverty, there are health problems. If we can improve the economic lives of this population, that can make a great improvement to their health," he says.

"Before, these people could literally spend hours preparing a modest amount of food. If we can find a way to do this quickly and safely, they could produce extra flour that they could sell and have the financial resources to correct their vision problems and other health issues. We have the potential to improve the lives of these people who are basically living a subsistence survival," says McDonnell, whose team also performed some eye surgeries on the villagers in Brazil.

The first GEI project was conducted in Arusha, Tanzania. Sheila West, the El-Maghraby Professor of Preventive Ophthalmology at the School of Medicine and vice chair for research at the Wilmer Eye Institute, has directed a clinical trial site in Tanzania for years, and on one of her visits she noticed that the local women would grind grain by hand, a process that took hours and often left their hands damaged. They first had to crack the corn with a large mortar and pestle to separate the shell from the meat, a procedure followed by time-intensive grinding with stones. West thought there must be a way to grind the corn more efficiently, and with less effort.

West got in touch with Elisseeff, who in turn connected with Jeannine Coburn, then a graduate student in the Department of Chemical and Biomolecular Engineering who worked in her lab. Coburn and her team designed a bicycle-powered grain mill, and in June 2011, she and two other graduate students traveled to Tanzania with West to implement a prototype of this human-powered flour mill. During their stay, they were able to re-create the device using local material and train people how to make and use it. The student team has since partnered with Global Cycle Solutions, which builds and distributes affordable and income-generating technologies in Tanzania.

Coburn says the experience had a huge impact on her.

"I have always wanted to be involved with global outreach projects and implement my engineering background," says Coburn, now a postdoctoral researcher at Tufts University. "Traveling and seeing how people live and react to technology helped me to realize social challenges to change, and the way we, as outsiders, should develop engineering solutions. Change is not the best approach to global outreach; giving people an opportunity to live healthier lives and ways to better their community is." Elisseeff says that projects like the ones in Brazil and Tanzania are ways that Johns Hopkins students can both give back and learn more about the world around them. "This program has enormous potential to have students visit various communities around the world to design and solve real problems that can help people in their daily lives," she says.

Elisseeff says that she's currently looking into ways that GEI can team up with Engineers Without Borders and other Johns Hopkins groups to scale up projects and form new collaborations.

The next GEI project will be based in Indonesia and will focus on the application of a wind turbine, designed by JHU students, and a community's agricultural needs, such as designing a fish-drying apparatus. The Johns Hopkins team will partner with an NGO called Kopernick with which Elisseeff connected at a World Economic Forum meeting in Myanmar in June. Elisseeff says that more details will be released soon and that interested students can apply at http://inbt.jhu.edu/education/international/gei.