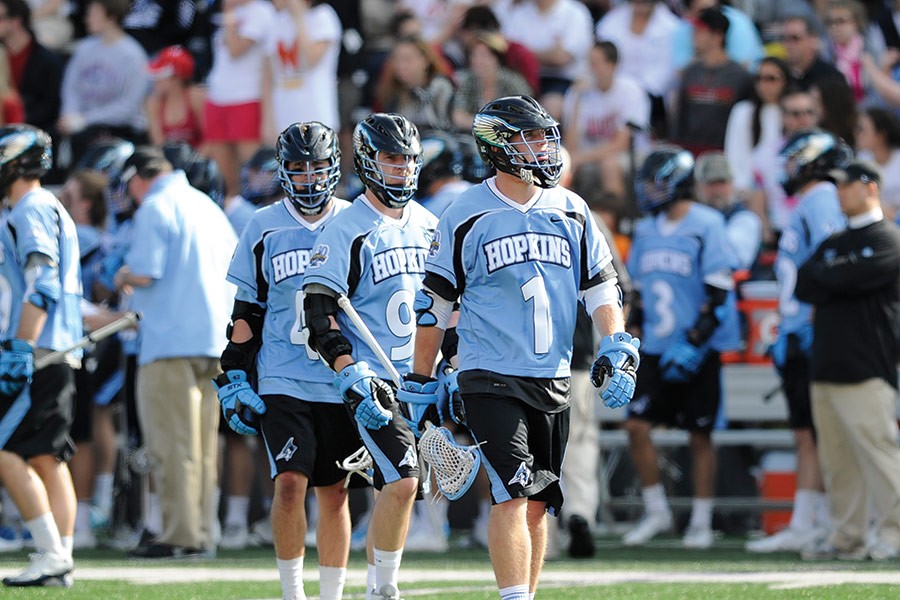 The Johns Hopkins men's lacrosse program surely had a historic and memorable 2013—although it's one coaches and players would likely rather forget.

Like all good things, the Blue Jays' streak of consecutive postseason appearances came to an end when Johns Hopkins failed to land an at-large berth in the NCAA Tournament. The last time Johns Hopkins did not make the postseason was 1971, the competition's first year. The 41-year streak is tied for the longest in all of college team sports, along with the University of Miami's still-active run for its baseball program.

Men's head coach Dave Pietramala says that for most teams, a 9-5 record with signature wins over Maryland and Virginia would constitute a very good season. "But for us, it's not what we're looking for, and it's unacceptable," says Pietramala, talking from his office just before New Year's. "Earning a spot in the NCAA Tournament and competing for a national title is the standard that has been set here, and one we still very much believe in. So, in that way 2013 was a disappointment and something that has motivated us through the off-season."

Of course, 2013 was also notable for men's lacrosse as it was announced then that the program would become part of the Big Ten Conference in 2015. Johns Hopkins will join current Big Ten schools Penn State, Ohio State, and Michigan, as well as future members Maryland and Rutgers. Johns Hopkins has been an independent in men's lacrosse since the program began play in 1883.

But Pietramala says he can't afford to dwell on either 2013 or the Big Ten, as foremost on his mind is the upcoming training period for the 2014 season and the Feb. 9 season opener against Ohio State at Homewood Field. Once again, Johns Hopkins will have to navigate a buzz saw during the regular season, as its schedule contains 10 teams that appear in the preseason top 20.

The goal is clear, Pietramala says: Return to the postseason and start a new streak. Now the team has to come together to see how it will get there.

"Every year is new. When the season ends, it's time to review your philosophy and how you go about things. What do you want to keep, and what do you want to change? We have done that," he says. "What's the old adage? Doing the same thing over and over again and expecting different results is the definition of insanity. We've made some pretty serious changes."

Without getting into specifics that might tip his hand, Pietramala says that the coaches will implement a scheme to make the team more effective and efficient on the offensive end and put teams under constant pressure.

"We have to be able to force a team to defend six players and not know where the shots are coming from.

Last year, it was easier for other teams to focus on two or three of our guys," he says. "I think we can be much more effective as a group, creating easier goals and taking away what the other team is trying to do defensively."

Pietramala, a noted defensive-minded coach, says that will mean living with mistakes.

"Speaking for the coaching staff, we have to be more flexible and patient and allow the players to build confidence in themselves," he says.

Pietramala says he expects the Blue Jays to once again sport a stellar defense, despite the loss of Tucker Durkin, the All-American and two-time William C. Schmeisser Award winner as the nation's top defensive player, and last year's starting goalie, Pierce Bassett. Both Durkin and Bassett graduated.

"Tucker was a special player, extraordinary talent, and a pretty special young man. And Pierce Bassett was a tremendous leader for our team. Those were two proven commodities we have to replace," he says. "But it's next man up, and we'll look to others to fill their shoes."

Eric Schneider will likely start the season in goal, Pietramala says. Senior Jack Reilly returns for his fourth season as a regular on defense.

"Jack Reilly is ready to have a great season," Pietramala says. "He's put a lot of time and effort into his game. Physically and mentally, he's proven he can play at a consistently high level. We will certainly look to him."

In terms of leadership, Johns Hopkins will have an entirely new set of team captains. Senior midfielder Rob Guida, senior short stick defensive midfielder James Malm, and junior long stick midfielder Michael Pellegrino have been selected in a vote of their teammates as captains for 2014.

JHU enters the season ranked 14th in the 2014 Face-Off Yearbook Preseason Top 20. The team returns its top two scorers (senior Brandon Benn and junior Wells Stanwick) and four players who scored 10 or more goals in 2013. Pietramala says now it's time to put in the work and get Johns Hopkins back to where it belongs. 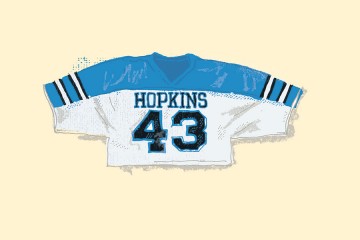 Lax jerseys, then and now

Published Jan-Feb 2014 Photos
From turtleneck sweater to midriff-baring T, the Blue Jays have made a statement on the field / Gazette