Peabody's amazing race: From composition to concert in 24 hours 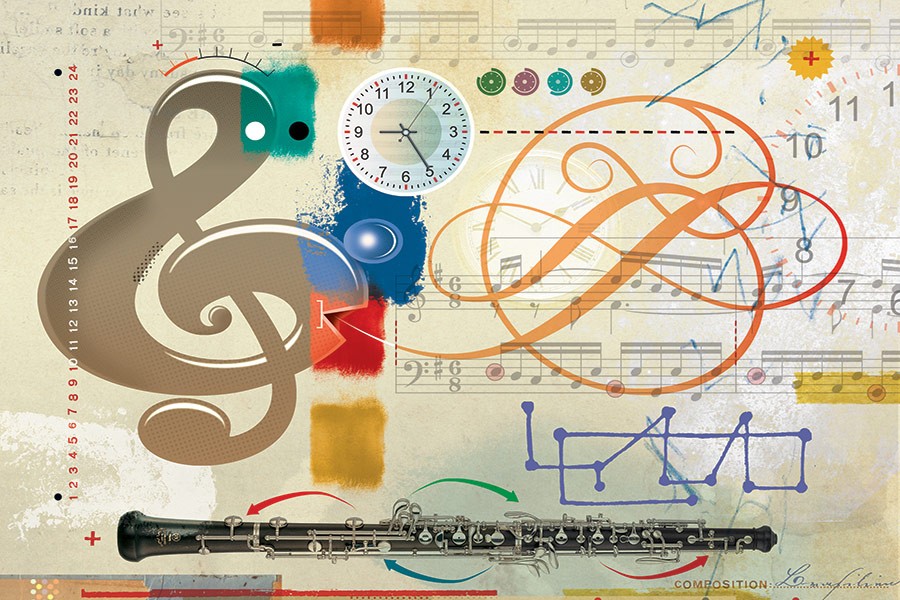 When John Belkot started composing around midnight last May 4, he was already four hours behind schedule. The second-year Peabody Institute doctoral student and graduate assistant in the Composition Department had organized his first 24 Hour Concert—24HC for short—and his writing deadline was looming.

For the 24HC, participating student composers bring the names of two instrumentalists to a meeting on a Friday night. Around 8 p.m., all the names are put into a hat and each composer pulls out two. Whomever they pull—violinist, flutist, harpist, percussionist—that's the instrumentation they're writing for. Scores need to be delivered at 8 a.m. to the performers, who get together to practice for the concert that begins 12 hours later.

Right after last year's duo selections, Belkot wanted to make sure all the participating composers were situated. They lock themselves in studios on campus, and throughout the night, any composing peers who aren't writing periodically pop in to see how everything's going. Pizzas get ordered; coffee runs are made. Belkot was also participating, but after making sure everybody was set up, and then hitting 7-Eleven to grab energy drinks and coffee for himself, he wasn't able to lock himself into Michael Hersch's studio until midnight. Next problem: He had drawn guitarist and oboist.

"Although I have some facility on the guitar, it's an incredibly difficult instrument to write for because there's a lot of strings, there's a lot of frets, and you've got to figure out what can be reached," he says with a laugh. "So if you give me any other instrument, basically, I can at least pump out some kind of 3 a.m. crap very quickly. But with guitar it takes 10 times as long just to think about if that 3 a.m. crap is even possible."

Good ideas started coming to him around 1:30 a.m. "I think I finished my piece around 4:30 or 5 a.m.," he says, shaking his head. "It took me forever to write, and it was only three and a half minutes long."

Such is the enduring charm of the 24HC, an event started in 2003 by J. Anthony Allen when he was a Peabody graduate student. The idea came from his experience while an undergraduate at Michigan State University, where a performance group wrote, scored, and staged an operetta over a 24-hour period. The 24HC became a recurring, once a semester event at Peabody starting in 2005 under the organizational acumen of Kevin Clark, who would later start the Junior Bach program. Stephen Edwards oversaw the program from 2009 to 2012, and participated in it four times.

"For me, it's always been the most fun to be had at a conservatory," Edwards writes in an email. "It's a test of endurance, it's a concert, and it's a celebration of all things new music."

Belkot took over last year, and he wanted to bring a bit more focus to the event. He made it annual to allow for better planning, organizing, and participation. He also made it a contest, albeit an untraditional contest at a music conservatory: deciding the winner American Idol style.

"I didn't want to take away from any of the fraternal aspect" of the experience, Belkot says. "So I had to think about a way to make it a competition but without killing the nature of the environment. So we decided to [award winners] by audience vote for which piece encapsulated the ideas and the values of the 24 Hour Concert—who best championed this cause instead of which is the best piece compositionally. It's a totally subjective popular vote."

Katsura Kurita, associate dean for student affairs, had her office donate gift cards to the cause, and Belkot bought a WWE-style wrestling belt to bestow upon the winner, who last year was Ben Buchanan. His piece was called "Suite from Peristyles" for horn and flute, and it included 33 movements, titled "scherzo," "mussitation," "Whirleygoosch—for Lonnie Jordan," "Switcherzoozle," "threnody for the victims of double reed instruments," "recitative," and so on. "I don't think he [wrote] all 33 movements, but this was his original concept," Belkot says. "I think we heard about 12 or 13 of them. That was horn and flute, but there was a lot of performance that was going on as well. It was not strictly played."

This freewheeling spirit runs through the entire 24-hour period. Composers don't know what instruments they'll be writing for, performers don't know what they're going to play, and while the concert itself begins adhering to the traditional decorum of the symphony hall, it's a well-pressed shirt quickly wrinkled by the event's frenetic and haphazard nature.

"It's always a total riot," Belkot says. "I think there's a fun aspect of keeping performance etiquette up, where at the same time it's all ridiculous. When you have contrabassoon and piccolo together, it's hard not to be."

The topsy-turvy approach is built into the event: Belkot won't know who is participating in this year's 24HC until the week of the event, and he's hoping that each composer brings three performers to the draft so that they're writing for trios. He does know that he's adding new competition categories—most committed performance, most humorous, most serious, etc.—for the audience to bestow awards upon. And the belt will be passed on to the next reigning champ.

"Starting new traditions, I think that's really the big aim, keeping this alive," Belkot says. "Peabody's a unique department in that everybody is really supportive of everybody, and this speaks to the diversity of the faculty, who all write wildly different music. And so their studios are all [diverse] like that. And it takes the subjectivity out of what's good and what's bad. Just because you write atonal music or just because I write tonal music, it doesn't matter so much because we can objectively look at it and help each other out. What are you intending in your piece, and how can we make it better? So already we have an environment that is incredibly accepting and nurturing, so I think this activity really brings everybody together to have fun."