National polls show that acceptance of individuals who identify themselves as lesbian, gay, bisexual, transgender, or queer is growing with each successive generation, according to Demere Woolway, the new director of LGBTQ Life at Johns Hopkins. 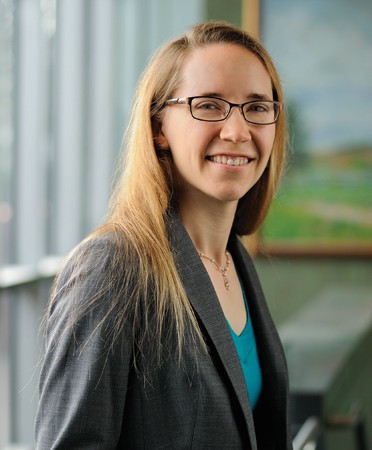 Colleges and universities across the country are hiring resource professionals like Woolway to run LGBTQ programs that provide both advocacy and education. Woolway is also a co-chair of the Consortium of Higher Education LGBT Resource Professionals that works to support staff on college campuses. She says that more than 220 of this national organization's 700-plus members work in offices similar to her own.

"When we serve the needs of folks with diverse sexual orientations and gender identities, we expand the way that universities can be inclusive," she says. "My hope is that we are making it a little bit easier for students. We support them as they figure out their identity."

Woolway—whose first name, Demere, rhymes with memory—moved in mid-July to an office in Homewood's Mattin Center to fill a new position that is an essential part of the Johns Hopkins mission to support the LGBTQ community.

"Certainly diversity is a very important aspect of the Hopkins experience," says Kevin Shollenberger, vice provost for student affairs. "One of our missions is to build community among a diverse group of students so they learn from each other's backgrounds. We're preparing them to lead and work in diverse environments."

Over the past 10 years, Woolway, 30, has worked with students at the University of Virginia, Washington State University, and most recently Miami University of Ohio (where she hopes to complete her PhD dissertation in its Student Affairs in Higher Education program in the spring).

At Johns Hopkins, she will build on the personal services the campus already offers to lesbian, gay, bisexual, transgender, and queer individuals. Queer, she says, is a term that "activist academics" are now using to identify themselves.

Woolway also will educate the community at large on how to be supportive about issues of sexual orientation and gender identity. In collaboration with students, she's developing a Safe Zone program that will offer three hours of training to anyone who wants to learn about the LGBTQ community and how to support its members.

She says she also hopes to connect the LGBTQ community at Homewood with others universitywide and encourage networking between diverse groups on campus.

University President Ronald J. Daniels, remarking on Woolway's appointment, says, "I am absolutely thrilled by the arrival of Demere, who brings a wealth of ideas, passion, and experience to this role. When we first set out early this year to find a director of LGBTQ Life, our goal was to draw to the university a national leader who would not only drive to best practices in this area but define those practices. I can think of no one better for this position than Demere, who will lead the development of programming, support, and services to create a climate at the university that empowers our students, and indeed all LGBT persons, to achieve their very best."

Special events marking National Coming Out Day are planned for the week of Oct. 11 to encourage conversation, support, and open expression of identity. Students are now coming out more frequently in middle or high school, Woolway says, not waiting until college as they did in the past.

"There are gay-straight alliances, online resources, and other support for younger people that make it easier for them to come out earlier and be themselves," she says. "We are still serving students who are coming out in college, but we have many students for whom coming out is no longer their issue."

Caroline Laguerre-Brown, vice provost for institutional equity, says that the university has "a high level of commitment to creating an environment that is safe and welcoming."

"It's important that students have the resources that they need and places that are safe and helpful," she says. "Students at this age are changing more than they will at any other time of their lives."

For more information, go to http://web.jhu.edu/lgbtq.