It seemed almost weekly that another college or university president was being ousted—resigning in a high-profile scandal or being quietly pushed out by the board or faculty. 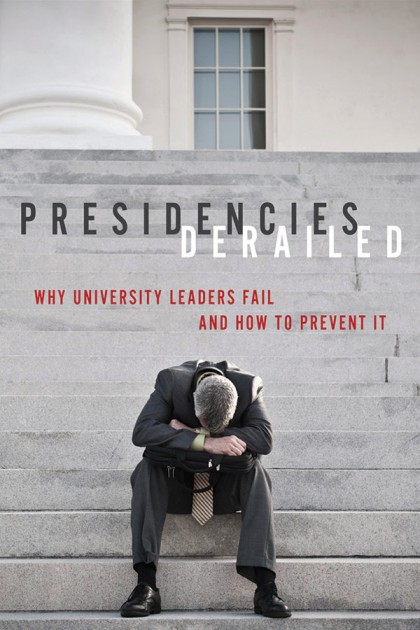 Image caption: During 2009 and 2010 alone, 50 college and university leaders resigned, retired early, or were forced out. The authors of ‘Presidencies Derailed’ set out to determine whether a pattern existed.

It's a question Stephen Joel Trachtenberg, a longtime university president, wondered as he noticed the frequency with which university leaders were failing. There seemed, too, to be patterns in the circumstances and behaviors leading up to their ousters.

"Perhaps there's something to be discovered here," Trachtenberg recalls pondering along with his colleague Gerald B. Kauvar. "Maybe we can write a book about this."

And they have. Trachtenberg, who served as president of George Washington University for two decades, collaborated with Kauvar and E. Grady Bogue, a former chancellor, to write Presidencies Derailed: Why University Leaders Fail and How to Prevent It (Johns Hopkins University Press, 2013).

The authors provide a thoroughly researched account of career fiascos that led to the downfall of leaders in private institutions, public universities, and community colleges. There was plenty of fodder for the book. During 2009 and 2010 alone, 50 college and university leaders resigned, retired early, or were forced out. Such departures, often quite public, are costly and embarrassing for the institutions. Given the sensitive nature of the gaffes, the authors went to great lengths to scrub identifying details from the case studies to protect the subjects' identities.

"It [was] hard to write this book because people generally sign nondisclosure agreements, so when they leave an institution, they finally negotiate and settle and people agree not to talk about it again," Trachtenberg says. "Everybody clams up."

Getting these failed leaders to open up about their career derailment was like pulling teeth, he says, but his rapport with the community and the approach of his collaborators served them well. In these detailed case studies, common themes emerge in the patterns of the leaders' downfalls, framing the disparate demises. They suffered from ethical lapses such as lavish spending, or they were brought down by their arrogance or tempers. Some were unable to adapt to their institution's culture, and still others suffered at the hands of a dysfunctional board that had failed to conduct a thorough search for the right leader.

"What surprised me was how little we learn from the experiences of those who precede us," Trachtenberg says. "People make the same mistakes again and again. You want to learn something from it and make it prophylactic."

The reason, Trachtenberg says, for studying these mishaps and themes is to offer guidance to search committees charged with hiring the next university or college president. The second half of the book offers advice on how to avoid these blunders.

The authors hope that the lessons have currency outside academia. "These themes are familiar," Trachtenberg says. "We hope [the book] won't be in just the education section. We hope it's in business or leadership or other genres. We hope it will be read by students of higher education and students of leadership, students of management, and the general public."

The book informs the discussion on leadership failings, making it a good fit for a scholarly press, says Greg Britton, editorial director for the Johns Hopkins University Press. Whereas some publishers might shy away from exploring these derailments, Britton says the academic press should publish work that is well-researched and advances conversation.

"We need to be brave about taking on these important issues," Britton says. "That's what scholarly presses do. We publish works that inform a debate."

And it was an unexplored topic that was frequently surfacing in the news. The authors identified a trend, he says, of presidents being in vulnerable positions, beholden to boards that have become less academic and more business-minded.

"That's a real change," Britton says. "College and university presidents have become like football coaches: two bad games and you're gone, and the stakes for schools are much higher."

Trachtenberg agrees that the book is an original contribution to the discussion. Already he and his colleagues are scribbling away at a follow-up: a book on successful presidencies. Now, they are mining the field for case studies and determining how to define a successful tenure. This endeavor might be a bit easier to write, as they plan to disclose names, but, Trachtenberg adds, "most presidents, even if successful, have knocked over some bottles of milk."