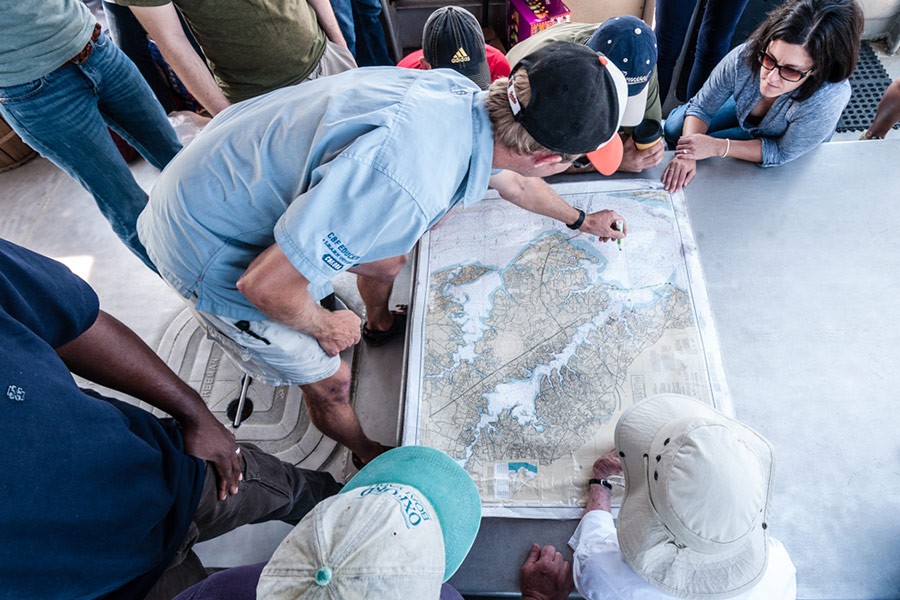 Paul Bayne, skipjack program manager with the Chesapeake Bay Foundation, throttled down the 40-foot jet boat, the Marguerite, as it reached a particularly peaceful section of the Severn River. Bayne, a tall and friendly sort wearing an Orioles cap, seemed pleased with the location and conditions on this recent warm and calm late-summer's day.

"I do have an anchor down, so hopefully we'll be as still as possible. It's a shallow depth, so you should be able to get some good data and samples here, and get a core done," said Bayne, a local-born veteran of this waterway.

No sooner had the boat's captain finished than the eager passengers, a diverse group of graduate students and faculty from Johns Hopkins and one student from Howard University, sprang into action. In an instant, a data frenzy commenced.

Some immediately dropped probes into the brackish water. One group readied a clear core tube for insertion into the soft riverbed sediment. Others snatched whatever gizmo or kit was near.

"If anyone needs any other equipment, let us know," said Tiffany Granberg, Bayne's CBF colleague. "We have two salinity meters. We have a secchi disk, a refractometer, and some nitrates and phosphates testing kits."

The "oohs" and "ahs" made it clear that Granberg spoke their language.

This journey down the Severn and back up to the mouth of the Chesapeake Bay was the second field trip in a week for the first cohort of fellows in the Water, Climate and Health IGERT (Integrative Graduate Education and Research Traineeship) program. The fellowship, which started last year, will train a corps of talented graduate students from various disciplines and backgrounds to assess threats to the world's water resources and human populace posed by climate change, and to develop innovative adaptive strategies that respond to these threats.

On this day, the nine students used the Severn and Chesapeake as guinea pigs for practicing and sharpening the field research skills that they'll need as they continue their academic journey.

Because diversity is a key objective of each NSF IGERT, Johns Hopkins asked Howard University, a historically black institution, if it would partner in this study. Kim Jones, a professor in the Civil and Environmental Engineering Department at Howard and a graduate of JHU, oversees a large program in water quality focusing on designing membranes for water filtration, and her Howard colleague Vernon Morris works on global atmospheric chemistry.

The principal investigator on the WCH IGERT is Johns Hopkins' Grace Brush, the award-winning DoGEE professor and water study legend.

Brush is a paleoecologist known for her work on the pre- and post-Colonial ecology of the Chesapeake Bay. Her groundbreaking studies have helped scientists and geographers better understand how the clearing of forests surrounding the bay in the 18th century impacted the ecosystem.

Brush says that although the IGERT program was technically awarded to DoGEE, it's more an offshoot of the university's Global Water Program that seeks to provide the quality and quantity of water needed to sustain the health of mankind and the environment. Several of the Global Water Program faculty are involved with the WCH IGERT, including the School of Public Health's Kellogg Schwab, DoGEE's William Ball and Seth Guikema, and Earth and Planetary Sciences' Ben Zaitchik and Darryn Waugh.

"The idea was to create a truly interdisciplinary program where people with various expertise would work on common problems," Brush says. "This kind of program forces us to have a cooperation and interaction that might not have happened otherwise. We're [training] these students to overcome great obstacles in what is an increasingly dire situation."

Through the Water, Climate and Health IGERT, fellows will learn how to apply new skills to practical problems through a place-based capstone course centering on the three diverse watersheds of the Chesapeake Bay, Peruvian Amazon, and Nile River basin.

The Chesapeake will serve as a model for domestic water-related issues such as storm water runoff and the impact of agriculture, the single largest source of nutrient and sediment pollution entering the bay. Like countless other parts of the world, the Chesapeake region has begun to feel the effects of a changing climate. As warmer temperatures and higher sea levels are noted in the region, bay scientists like Brush are working to understand the possible effects of these changes on the bay and its watershed, including how they may affect restoration efforts already in progress.

In the coming years and decades, Brush says, changes in the hydrologic cycle are expected to decrease the supply of safe water, forcing vulnerable populations in poor countries to drink dirty water, leading to increased disease. Experts believe that food production will become scarcer as unsustainable groundwater withdrawals are affected by increased drought. As contaminants continue to flow into water bodies and hydrodynamic patterns adjust to climate change, the coastal fisheries upon which human populations depend for food will face increased problems of eutrophication and anoxia.

Integrated strategies, Brush says, are needed for predicting and adapting to climate-driven stressors on water resources and human health. Among these strategies could be smart growth land use practices resulting in reduced greenhouse gas emissions or water infrastructure systems that conserve water and energy.

Each WCH IGERT fellow receives an annual $30,000 stipend and full support for tuition, fees, and health insurance for two years.

In addition to department requirements in the doctoral program in which the student is enrolled, each WCH IGERT fellow is required to take five newly developed courses over four semesters. IGERT trainees also participate in a monthly colloquium where they engage with a host of experts on everything from the influence of climate on health and food security to water treatment and policy analysis.

Ten students were selected as the first cohort, and another five are being added to the program this month.

Margaret Kosek, an assistant professor of international health at the Bloomberg School and a co–principal investigator on the WCH IGERT, says that this unique program provides a rich exposure to subjects in a very collegial environment. Kosek says that the students bonded quickly and continue to flourish.

"It's been so rewarding to see how this program has grown over the past year as students find their way," says Kosek, a physician by training. "People throw the word interdisciplinary around a lot, and it tends to get overused. But here we have engineers, earth and planetary scientists, and public health people combining their interests and talents. It's very exciting to be part of."

Kosek says what she brings to the table is measured thinking about water and human health. For the past 14 years, she has been part of a research group in Peru that has examined health indicators such as water quality, nutrition, and sanitation efforts and how they might impact child growth and development.

The intersection of climate and water in Peru, she says, is quite pronounced.

"The remarkable rate that glaciers are being lost has already impacted an area that hasn't developed adequate water storage," she says. "We've seen greater dry zones, flooding, change in the seasons. The Amazon Peru has been marked by climate scientists as particularly volatile and prone to natural disasters. Floods can cause sewage to overflow straight into homes. It's not something that a simple filter can handle. These problems are beyond simple fixes."

Next summer, a group of the WCH IGERT fellows will join Kosek and other faculty for a three-week field trip in the South American country.

"The Amazon is a concrete but very challenging place to conduct applied research," she says. "It will be very different politically and socially from what these students might be used to. But that's a good thing. It will be beneficial for them to gain exposure to a full complement of water, climate, and health issues in a different setting."

Those not going to Peru will travel to Ethiopia to work with Ben Zaitchik, who has been studying climate variability in the area and water quality in the Nile River. Zaitchik has also looked at the impact of agriculture and other interactions with the landscape, such as erosion and controversial dams along the Nile.

Zaitchik says that by the time summer 2014 rolls around, this first cohort of WCH IGERT students will be ready to hit the ground running at these international sites.

"The classes are a unique environment where everyone can learn from each other," he says. "I recently gave a lecture on a watershed model where I planned for an hour talk, but it turned into a three-hour discussion because the students were so engaged. We just have very rich discussions where people are bringing all different perspectives to the table."

Natalie Exum, a first-year doctoral student in environmental health, has trained as an environmental engineer and is specifically looking at diarrheal disease in the developing world.

"The IGERT program is really ideal for me because I'm an engineer who is trying to look at a question of health, so this program allows me to keep my technical focus and take some engineering classes while also spanning the two worlds," she says. "Just by being with students who are looking at these problems from different angles, it helps me to take an interdisciplinary approach to very complex issues." Chris Kelley, a doctoral student in DoGEE with a background in civil engineering, joined Johns Hopkins after a period when he worked for the state of Texas managing drinking water quality data.

"I realized the need for an integrated approach to uncover why implementation fails, not just in developed areas like Texas but in places where you don't have the government investment and resource allocation to managing water quality. IGERT is an opportunity to look at problems like [water quality] from multiple perspectives, which, despite the best efforts, doesn't always get a cooperative focus."

Kelley, an Austin native, had never been on the Chesapeake Bay before this recent trip, as was the case for most of the IGERT fellows. Many had not spent much time out of the lab, so the opportunity to get their hands wet and dirty was a welcome one.

A standout moment for most came when the boat's crew dredged for oysters on a bed that, because of recent strict policies and oversight, has begun to flourish after more than a century of overfishing that all but destroyed the bay's oyster population.

When the time came to pull the dredge out of the water, the fellows teamed up to pull the rope with a booming chorus of "heave ho's."

Just after the oysters and other sea critters spilled out on the boat's engine box, another lesson commenced.

Granberg spoke about how one oyster can filter 50 gallons in a day as it sorts out suspended solids in the water, taking only what it needs and breaking down the rest into tiny pellets and ribbons that get deposited on the water floor and then become "fast food" for worms, crabs, shrimp, and fish.

"That is why these oysters are so important, and why we want to see them come back and thrive in these waters," Granberg said. "They help improve the water quality and are invaluable to this ecosystem that we love."

The students nodded and ate up every word. They realize that, like the oysters, they will have a role to play in the healthy future of endangered waterways. They are ready to get to work.