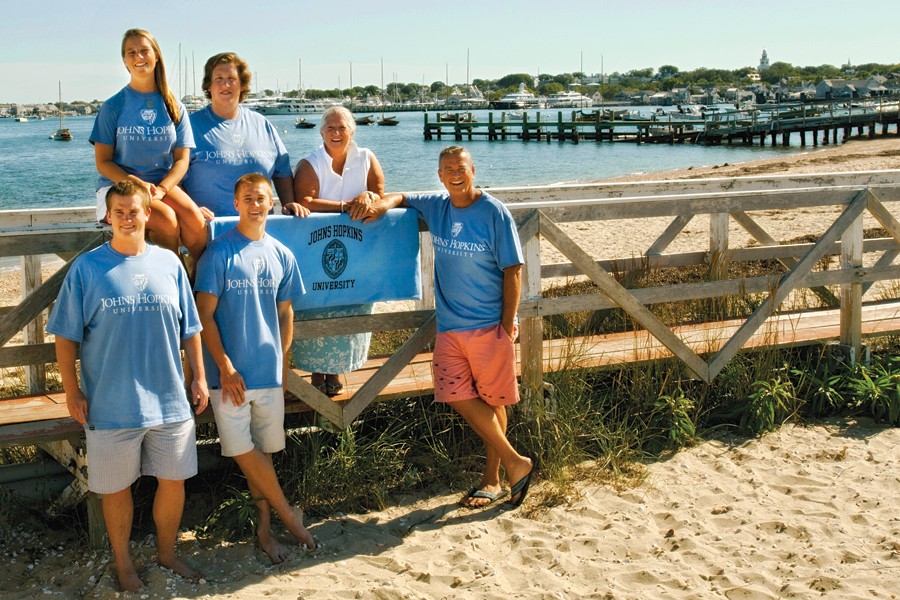 Image caption: On Nantucket, where they try to gather each summer, are Chris and Rene Hampton and their four children, all current Johns Hopkins students. Clockwise from top left are Bridget, Patrick, Rene, Chris, Gerard, and Christopher.

When Chris Hampton came to Johns Hopkins, he was the first of seven Connecticut-raised Hampton siblings to cross the Mason-Dixon line. Thirty years after his 1983 graduation, all four of his children have made the same choice and are enrolled together at JHU.

His "serious first-born," Chris Jr., 22, is in the final year of a BA/MS program in neuroscience. He got hooked on the discipline when he got to watch a brain-implant surgery during a freshman year internship. These days, he's researching retinal stem cells at the Wilmer Eye Institute. "I'd be worried about him being so focused and serious, but his group of friends is interesting, eclectic, and from as far away as Puerto Rico and South Africa," says Hampton.

At 21, his second son, Patrick, is a senior double majoring in public health and Africana studies. He spent last year's fall semester in Tanzania, working at a day care center for disabled kids. Before that, it was a month in Ghana and a trip to Honduras with the JHU Global Brigade. "He can save the world, sing, and play the cello. He's quite the Renaissance man," Hampton says.

In many ways, Gerard, 20, has followed in Patrick's footsteps. They're Phi Kappa Psi fraternity brothers, rugby players, and double majors focusing on public health. Gerard's second major, though, is Classics, and he's studying and interning in Rome this semester. "My wife and I jokingly call him 'the kid we like,'" says Hampton, describing a genteel, peace-making son. "He's not as academic as his brothers, but he's the one who will be the billionaire."

Bridget, 18, is a new freshman, a field hockey player, and "a spitfire," according to her father. She submitted a heart-rending Hopkins admissions essay to explain why she wants to major in psychology: In 2007, her summer-camp friend, Michaela Petit, was killed in the horrific Cheshire, Conn., home invasion murders. "It was very traumatic. She was 11, and she wouldn't go out of the house," Hampton says. "Now she has it in her heart and soul that she wants to be a psychologist. She's willing to work her ass off for it."

It feels strange to have an empty nest, admits Hampton, who teaches ethics at Jackie Kennedy's alma mater, Miss Porter's School in Farmington, Conn. For the last 20 years, the family home has been on the school's campus, which let him be "like a stay-at-home dad," especially for Bridget, who attended the private school for girls.

For Hampton and his wife, Rene, this is the quietest year they've had in two decades. What will they do with their newfound free time? They don't know yet, Hampton says, but it will definitely be on the cheap. "With four kids in college, I can't even afford a Motel 6."