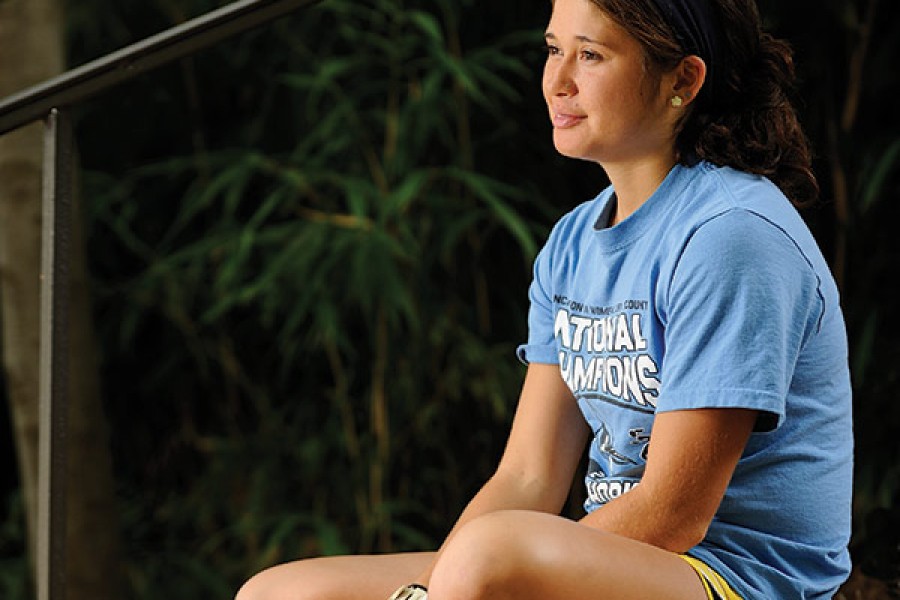 Beyond the rhino-skin confidence that many top athletes possess, sophomore runner Hannah Oneda owns a strong sense of self. The freckle-faced 19-year-old certainly knows what she wants, and doesn't want.

A global environmental change and sustainability major, Oneda plans to help save the planet but has no desire to jump into the climate policy fray. "It's a different battle," Oneda says. "I'm learning what battles I want to take on and which ones I don't."

Oneda sees herself at an NGO working in the field, or starting her own grassroots organization.

"I don't want a 9-to-5 job, and I don't want to live in the same area for more than three years," Oneda says matter-of-factly. "I know, those are lofty goals, but if you really want something you can make it work."

She can certainly attest to that.

Along the way, Oneda broke several Johns Hopkins and Centennial Conference records. For one, she is the only freshman individual champion in the 20-year history of the Centennial Conference Championship, where she set a JHU program record with a 6K time of 21:03. She also holds the Centennial and Johns Hopkins records in the 3,000-, 5,000-, and 10,000-meter races in outdoor track and the 3,000 and 5,000 meters in indoor track.

According to both Oneda and her coaches, she is just getting started.

A star runner in high school and a Footlocker XC finalist, the Westminster, Md., native had her pick of schools to attend on scholarship, and several Ivy League schools courted her. She seriously considered attending Columbia University, but the recruitment visit to Johns Hopkins, one she made only reluctantly, won her over.

"Before that visit, I thought, I probably don't want to go to Johns Hopkins—it's just 45 minutes from my house, and it's where my dad went. I told myself, I'll just visit and check it out," she says. "But I remember when I stepped on campus, I thought, I really like it here. My dad couldn't believe it. I never got that same feeling when I visited other schools."

Oneda initially wasn't sure what she wanted to do in college besides run, but when she learned of JHU's global environmental change and sustainability major, she knew she had found the perfect match.

The daughter of an elementary school teacher and a psychiatrist, Oneda grew up in an environ­mentally conscious household of American-Japanese descent. The family grew its own vegetables, kept a beehive, gardened, and all-around practiced sustainable living. Cooking and family dinners were important, she says, as was an appreciation of what they had.

"The influence from both my parents was huge," she says. "I learned from them how I wanted to change things. To make the world around me a better place and preserve what we have."

When it came to running, Oneda says she knew she wanted to do something "really big" in college and make an impact. She pictured herself winning cross-country nationals, a vision that became all the more real the closer the moment came to that fall day in Indiana.

"Last year was the most magical season," she says. "From the very beginning, I really thought we can win this. Sophia [Meehan] and I talked about nationals every single day. We told each other this is how we're going to do it. The morning of the big race the entire team got in a circle and collectively we had that feeling we were going to win. It gives me chills just thinking about it."

She says the title hasn't changed her resolve. Oneda is not content with one trophy. She wants more.

She's also proving her freshman season was no fluke.

As of press time, the women's cross-country team was ranked No. 1 in the nation, and Oneda was the top Division III runner at the Spiked Shoe Invitational held last month. She also holds the team's fastest time in the 6K.

This summer, Oneda represented the United States at the 2013 Pan Am Junior Athletics Championships held in Medellin, Columbia. She earned the right by finishing third in the 5,000-meter race at the U.S. Junior National Track & Field championships in Des Moines, Iowa, in June.

The experience was a highlight of her life, she says. She didn't win, the high altitude proving too much to overcome, but the opportunity to go up against the best young runners in the world and compete for her country was unforgettable.

Bobby Van Allen, head coach of the women's track and field and cross-country teams, says he knew when he recruited her that Oneda could be a special athlete.

"Coming out of high school, she was clearly the best runner in the state of Maryland. I also knew she had a lot of room for improvement," Van Allen says. "Hannah is extremely competitive but in a very productive way. She takes a lot of pride in all of her teammates' success and our team accomplishments. She is competitive with herself in practice and certainly sets very high standards for herself that she is always trying to compete with."

For the remainder of the season, Oneda has already set a list of big goals. She wants to place in the top 20 at the Paul Short Invitational on Oct. 5, and then win an individual title at nationals, leading her team to its second consecutive championship. No female Division III cross-country runner has won an individual and team title at nationals since 1994. Oneda wants to break the streak.

"Right now it's about getting everybody excited about winning again," she says. "It's important to have that in your mind. You are not going to win if you don't think you are. It's not arrogance, more confidence."

She also wants to achieve a personal record in the 6K, shaving a minute off her time.

Oneda believes her best is yet to come. Freshman year meant getting used to school and classmates. She was "one giant stress ball" last year, she says, whereas this year she's been able to get more sleep, train harder, and better adhere to a schedule. While she may not possess the quintessential runner's frame, Oneda has worked hard to develop strong legs and core that help power all 5 feet 5 of her. She has a newfound appreciation for weight training and says the extra strength will pay dividends.

Van Allen says there are times he has to hold Oneda back and look at the bigger picture. But she's smart, he says, and constantly wants to learn more about the sport and what will make her a better athlete.

"I'm not going to be the one who stands in the way of her goals; I'm just going to keep her in the right direction," he says. "Hannah's potential doesn't have limits. I certainly think an individual championship is well within her reach, but she knows she is going to have to get faster and stronger."

With Oneda, you can bet on it. 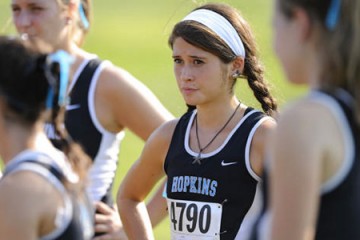 A long long way to run