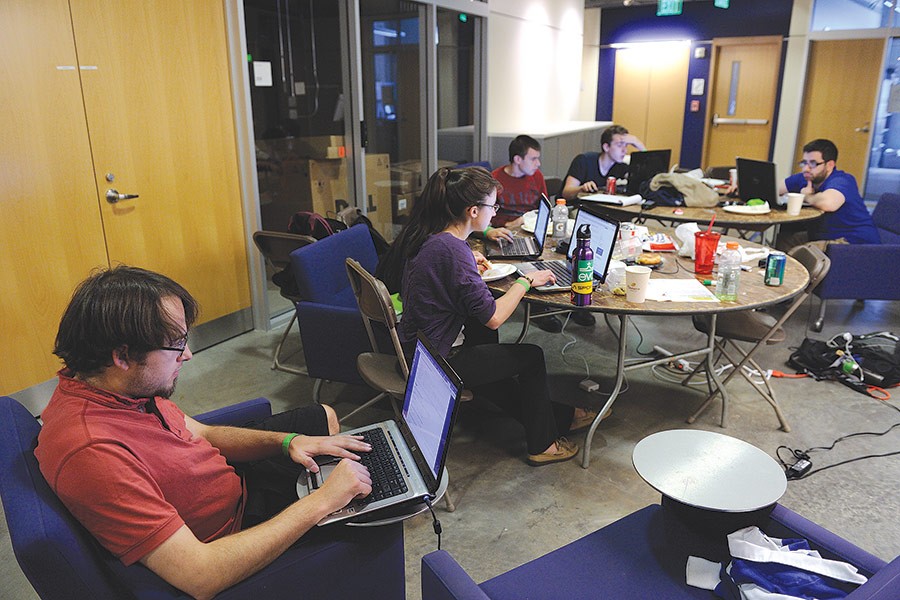 Image caption: In a sleepless 36-hour weekend marathon in Hackerman Hall, more than 100 students test their skills developing new computer apps, among them a smartphone scale and a dormitory safety system.

The winning entry was DropMe, a location-aware media-sharing application for iOS that enables users to "drop" a message, picture, or file at an on-screen location based on a mobile phone GPS. It was developed by Brian Ho, Ben Lu, Willis Wang, and Miles Zhang and was judged to have the highest levels of creativity, technical difficulty, polish, and usefulness out of the 24 applications presented after a 36-hour work session.

"We were very impressed by what you all managed to do in a weekend. A big thumbs up to everyone," said Jason Eisner, a computer science professor who sat on the panel of judges with fellow professors Peter Froehlich and Scott Smith; Devon O'Dell, of content delivery network Fastly; and John Bienko, of the U.S. Small Business Administration.

About 120 undergraduate and graduate students—some working alone and others in teams of up to four—took part in the event, which ran Friday night through midday Sunday on the Homewood campus and brought people together to take part in collaborative computer programming. Though hackers were free to work on any applications, organizer Daniel Swann suggested in advance that some consider creating an application that "benefits the city in some way."

"There is a big dataset called OpenBaltimore that houses data about crime and traffic patterns, and we encouraged people to leverage that," said Swann, a junior who got the idea for the event after he and several classmates returned from PennApps 2013, the University of Pennsylvania's student-run event. "We thought it would be awesome to do it here because it encourages innovation and entrepreneurship. This is what I think of as civic hacking."

Swann worked with Ben Glickman, Nathan Schloss, and Tyler Cloutier over the summer to organize the event and to convince Facebook, Bloomberg L.P., GitHub, EPIC, and the Social Innovation Lab to provide sponsorships.

Fueled by countless cups of coffee and Red Bull and fortified by nourishment ranging from sandwiches and pizza to Indian food and ice cream, the student hackers worked on their applications for 36 consecutive hours in Hackerman Hall.

"One of the hardest parts was just not being able to take a shower," said a grinning Aaron Bornstein, a senior at Goucher College who is taking courses at Johns Hopkins as part of the Baltimore Student Exchange Program. Bornstein's team presented Automated Tag Prediction, a tool that would better classify hashtags to make searches more accurate and trends easier to spot.

Applications ran the gamut. Among them were SuperScale, which would enable people to turn their smartphones into scales; Bmore Safe, which would assess a person's risk of being the victim of a crime based on time of day and location; and Dorm Sec, which aims to make dormitories safer through the use of data scanned from driver's licenses and college IDs.

Others included Bmore Sheltr, which would enable smartphones to assist homeless people by locating the nearest shelters and food banks; At Risk, which uses stats from the Centers for Disease Control and Prevention plus age, gender, race, and other demographic information to assess one's risk of illness and accident; and Bmore Happy, which would not only recommend happy hours at various locations throughout the city but also reveal which bars and restaurants friends frequent.

"I felt that overall, the event was a tremendous success," says Swann, who is planning another hackathon for next semester. "The winning hacks were extremely creative and well-polished, and I felt that the winners definitely deserved their prizes. I could even see some of the projects possibly being spun off into startups or independent studies."

Second prize, $512, went to the all-sophomore team of Farhan Damani, Blaine Muri, and Jason Albalah for SuperScale, and third prize ($256) went to the graduate student team of Rahil Arora, Ankit Sharma, Nishikant Deshmukh, and Saramjeet Prasad for Facebook Concerts, which would allow hosts of events to sell tickets through Facebook. This application also won the Facebook prize.