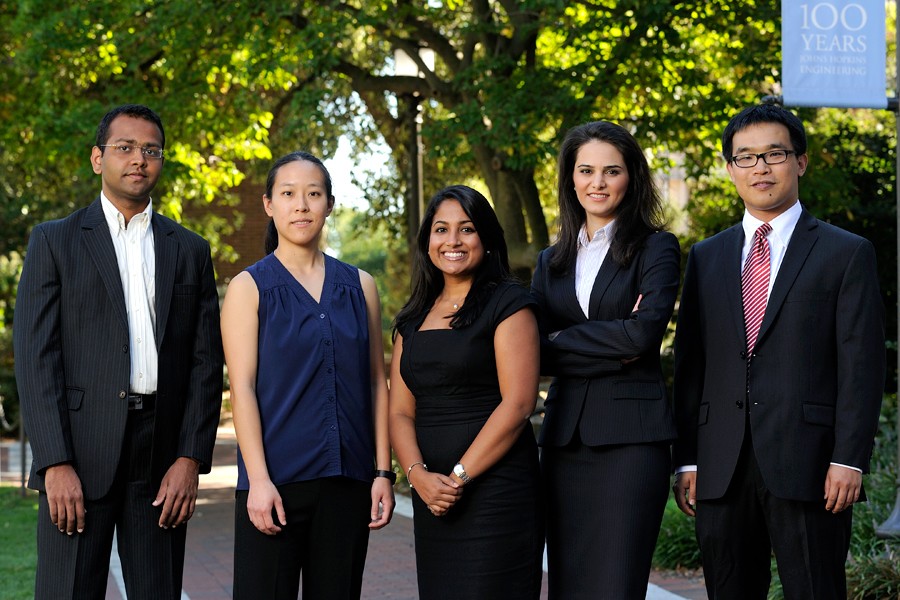 Five Johns Hopkins graduate students, recently named to the 2014 class of Siebel Scholars, are pushing the boundaries of medical technology to develop new and improved ways to diagnose and treat cancer, heart disease, and other serious health problems. The students are trying to turn stem cells into healthy blood vessels, are testing biological reactions within microscopic droplets, and are using advanced imaging techniques to detect disease at an early, treatable stage.

In recognition of their research skills, academic achievements, and leadership qualities, the five PhD candidates are being honored as Johns Hopkins' 2014 Siebel Scholars. The merit-based Siebel program provides $35,000 to each student for use in his or her final year of graduate studies. The Johns Hopkins recipients were among 85 students selected this year from prominent graduate schools in the United States and China, including Harvard, Princeton, MIT, and Stanford.

The Siebel Scholars program was founded in 2000 by the Siebel Foundation to recognize the most-talented students at the world's leading graduate schools of business, computer science, and bioengineering. Today, 870 Siebel Scholars are active in the program, which seeks to nurture leadership, academic achievement, and the collaborative search for solutions to the world's most-pressing problems.

At Johns Hopkins, the Siebel Scholars program supports doctoral students in bioengineering studies. Four of this year's recipients are pursuing their degrees within the Department of Biomedical Engineering, which is shared by the schools of Medicine and Engineering; the fifth is in the Whiting School's Department of Electrical and Computer Engineering. The honorees are as follows:

"It's an honor that the Siebel Foundation has, once again, decided to name five of our most promising graduate students as scholars in their vibrant community of talented future leaders," says Andrew Douglas, interim dean of the Whiting School. "This award will expand our students' opportunities for entrepreneurship and collaboration, which we consider integral to innovative engineering research."

Thomas M. Siebel, chairman of the Siebel Scholars Foundation, says, "It is my great pleasure to congratulate the Siebel Scholars Class of 2014 and to welcome them to the Siebel Scholars community. They join a formidable group of entrepreneurs, researchers, and philanthropists who are directly influencing the technologies, policies, and economic and social decisions that shape the future."