When Christy Wyskiel moved to Baltimore 14 years ago, she was on the cusp of setting off a domino effect that would lead to her present-day role as an innovator and advocate for the city's startup scene. 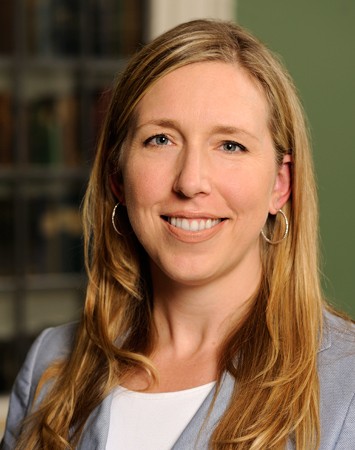 In January, Wyskiel, the newly appointed senior adviser for enterprise development to Johns Hopkins President Ronald J. Daniels, takes on the task of overseeing the commercialization of discoveries and inventions by Johns Hopkins faculty, staff, and student researchers.

With almost 20 years of medical investing and stock analysis behind her, Wyskiel says she is ready for the job.

An alumna of Williams College and New York University, Wyskiel worked for J.P. Morgan and the Cowen Group, where she focused on health care investment banking.In New York, the Texas-bred Wyskiel met her now-husband, Matt, a fellow Williams College graduate and Baltimore native. They relocated to Baltimore in 1999, and Wyskiel was hired as a medical and life sciences analyst in the equities division of T. Rowe Price. She played a similar role when she was recruited in 2002 by Maverick Capital, working as a managing director for the New York firm out of Baltimore and traveling often to medical conferences and companies whose stock she followed.

But the private investing that Wyskiel did while working for Maverick, she says, is what kick-started her entrepreneurial interests.

"My team at Maverick made a couple of investments in medical technology companies that did very well," she says. "And it was about that point in time when I realized that my true passion lay in helping entrepreneurs and being part of the startup ecosystem rather than just being a financial analyst."

In 2009, Wyskiel founded CWW Research with a mission to help evaluate and facilitate startup activity around Baltimore. She narrowed in on Johns Hopkins researchers after realizing the wealth of innovative happenings taking place there.

"I could add value by helping faculty members write business plans, connect with investors, do some business plan modeling, some market analysis, and I got really excited about that," Wyskiel says.

The partnerships she formed led her to be co-founder, along with Johns Hopkins faculty members, of two companies. Funded through a GlaxoSmithKline research agreement, Cureveda LLC, which develops drugs to counteract autoimmune and inflammatory diseases, was formed in 2010 from intellectual property created in Shyam Biswal's lab in the Bloomberg School of Public Health. GrayBug LLC, founded in 2011 with three faculty members from the Wilmer Eye Institute, focuses on time-release drug-delivery systems for eye diseases such as age-related macular degeneration.

Along the way, Wyskiel made mental notes on how Johns Hopkins could improve its relationship with faculty researchers. She discussed her thoughts with President Daniels, which led to her becoming an adviser until she officially assumes her position as senior adviser starting Jan. 1.

Wyskiel is no stranger to being at the helm of things. Out of the office, she is vice chairman of Teach for America in Baltimore. The mother of two also heads an annual fundraiser in partnership with her husband called Next Generation Investing Event, which brings investors together to raise money for three nonprofits.

"My free time I really spend trying to focus on Baltimore, and how to improve the educational opportunities for children in the city," Wyskiel says.

Connecting the dots like this is something Wyskiel plans to incorporate into her new role at Johns Hopkins. She says she will serve as "connective tissue" on the innovation front—taking ideas from the lab and optimizing them for the commercial market.

So far, Wyskiel has spent her time assessing what the JHU entrepreneurial community has, what it wants, and what it needs. She says there are three elements missing in JHU's entrepreneurial platform: space, services, and funding.

"Those are the three pillars in my mind of a successful ecosystem if you look at other universities around the country, or even around the world, that have done this well," Wyskiel says.

To address the issue of space, Wyskiel plans to work with a committee chaired by Drew Pardoll of the Sidney Kimmel Comprehensive Cancer Center and Jennifer Elisseeff of the Wilmer Eye Institute and the Department of Biomedical Engineering to create an innovation hub in East Baltimore that will expand on work done by FastForward, JHU's technology accelerator already in place.

As for services, Wyskiel wants to provide educational resources for writing business plans and learning how to connect with investors, along with marketing, legal, and accounting information.

She's also working on DreamIt Health Baltimore, an accelerator project co-sponsored by Johns Hopkins that will act as a health-related entrepreneurial boot camp from January to May 2014. Ten startup finalists will be recruited from around the world. The hope is that some will choose to remain in Baltimore after completing the accelerator program.

Wyskiel says that in the near future, she would like to see both Johns Hopkins and Baltimore become hotspots for entrepreneurial activity.

"I think that what we're doing is good for student learning and could potentially supply funds to support an academic mission," she says.