In 'Someone,' Alice McDermott builds captivating novel around ordinary life

Alice McDermott performs a minor miracle with her new novel, Someone: A Novel, crafting a captivating story in which nothing much happens. The novel explores a single life through those ordinary events—deaths, births, a marriage—that mark most lives. In Someone's case that life belongs to Marie Commeford, the 7-year-old daughter of Irish Catholic immigrants living, when the novel opens, in Brooklyn between the wars. She grows into a relatively ordinary woman, and in allowing Marie to present her story, McDermott has opened up a single life into an extraordinary experience. 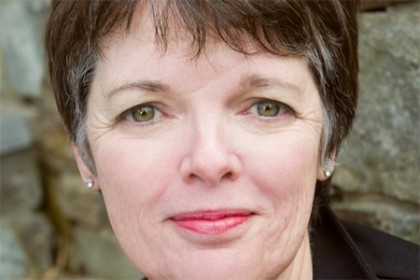 The novel grew out of the belief that "on some level, we more or less all struggle with the same things," says McDermott, the Richard A. Macksey Professor for Distinguished Teaching at Johns Hopkins, during a recent phone interview. "And when it's our life, it feels epic because it's us."

McDermott, who has taught in the Writing Seminars since 1996, decided to explore the epic in the everyday through a radically different kind of woman than is usually found in contemporary fiction. "In some ways, I was just being a contrarian and thinking, In this day and age, this is not the kind of novel you should write because everybody's writing women in much less specific ways,'" McDermott says.

Marie isn't a hard-nosed forensic crime solver, or a young woman who has greatness thrust upon her and has to save the day, or a supernatural anything. Instead, "she's sort of a small and kind of shy and plain person, so nobody much else asks her opinion, although she has a very active inner life, as we all do. So [in writing the novel], I just thought to have the courage to say, Even a person like this, without any ostensible heavy plotline in her life, or anything spectacular happening, but with enough care and attention can become a character who can carry an entire novel. That was the challenge I put to myself and a challenge, maybe, to other writers who haven't given women their due."

McDermott answers this challenge with sharp, economical prose. In fewer than 250 pages, Someone, which appeared on the long list for the 2013 National Book Award for Fiction, charts Marie's life, presenting her observations about her immediate world in a plain-spoken voice that evokes the past but feels immediate and familiar.

"I think a lot of historical fiction first does the outside and then does the inside, and I guess I flipped that on its head," McDermott says. "I wanted to know [Marie's] inside, how she was looking out, and what she saw. She was not a person who was terribly interested in politics and history, but she was interested in the lives of the people next door and down the street, so that's what you see through her."

And you get the impression that Marie, the daughter of hardscrabble Irish Catholics, would speak and think in the dry-witted, captivatingly matter-of-factness of McDermott's prose, through which the novel accrues a lingering emotive power. "I do think that omitting needless words is not just a good thing from Strunk and White but in encouraging the art out of a story, that sense of saying only what needs to be said," McDermott says. "I think that there comes a sense where overexplaining diminishes the meaning, trivializes it. I think language takes us to that point where language fails us, and there's so much about experience that we don't understand that we really don't have words for.

"As a reader, I love when I encounter that," she continues. "Isak Dinesen calls it 'the silence at the end of the story,' and when the silence speaks, you know you've heard a good story. That thrills me—not everything is said, and yet I hear more when the story's over. So I aim for that."

Published Sept 19, 2013
Writing Seminars' McDermott on National Book Award longlist for fiction, her third nomination for the award she won in 1998