JHU's Evergreen Museum shows off its recent and promised gifts

By the time in 1931 that Alice Warder Garrett commissioned Miguel Covarrubias to paint murals in the new library of her mansion, Evergreen, the New York–based Mexican artist had already established himself as one of editor Frank Crowninshield's shining stars at Vanity Fair. The magazine became a bellwether for American cosmopolitanism in the 1920s and 1930s, thanks in large part to artists like Covarrubias who brought European modernism to the caricatures of movie stars and politicians in its pages. 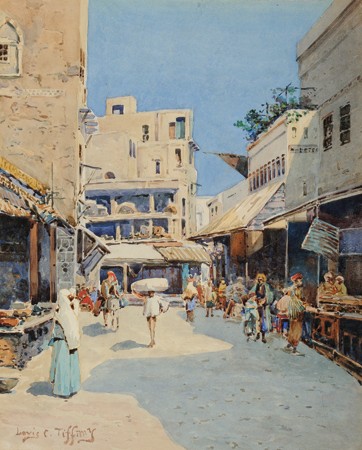 Image caption: Louis Comfort Tiffany’s ‘Moroccan Market Scene’ is among the recent and promised gifts now on display at Evergreen Museum & Library. The ca. 1875 painting was a gift of Wallace W. Lumpkin.

As a Mexican man in New York, though, he didn't quite fit in with Vanity Fair's posh crowd. "He found greater acceptance in Harlem during the Renaissance than he did in the pockets of society that he had initially been directed to by Crowninshield," says James Archer Abbott, director and curator of Evergreen Museum & Library, as he points to four stunning black-and-white Covarrubias illustrations currently hanging in the North Wing Gallery. "So he started to document the Renaissance, and we have these beautiful drawings of dancers and a woman in a cafe scene and this profile taken to a very basic form, almost doing what Modigliani did with the inspiration of African masks."

The drawings were donated to the museum by a collector who had visited Evergreen and been struck by the Garretts' art. "These came to us via someone who walked through the house, saw the Miguel Covarrubias [murals], didn't realize Covarrubias was being celebrated in Baltimore, and said, 'I'd love to add to that collection.'"

Just about every item in Evergreen's new exhibition, Lasting Legacies: Recent and Promised Gifts to the Permanent Collection, has a story behind its journey to the museum.

Abbott says that Ambassador and Mrs. Garrett, who donated their home and collection to the Johns Hopkins University in 1942, stipulated in their wills that if the university were to be offered gifts that were "complementary to what they themselves had collected," then those items should be integrated into the residence's rooms. "So that's what [the museum] has been doing all along," Abbott says. "But it occurred to me that most people who come to Evergreen just see it as a period piece. And it's never been that."

Lasting Legacies brings together a selection of recent and promised items that have come to the museum over the past 20 years. These gifts connect in some way to the Garretts' collection—which includes European painting (with works by Degas, Modigliani, and Ignacio Zuloaga), decorative arts, and rare books—or to the Garretts themselves.

One gift shares a diplomatic back story. Allan C. Davis and his wife, Barbara, became recognized collectors of African art during Ambassador Davis' career in Africa. They were drawn to another art-collecting ambassador, but the Garretts' collection didn't contain African items.

Ambassador Davis wanted to know more about the Garretts' Asian art. "I said a lot of it had to do with trade," Abbott says, explaining that in the late 19th century new wealth was interested in travel and other cultures, and trade was a part of that. The Davises approached Evergreen with a selection of trade-associated African body adornments, which, it was determined, complemented the Garretts' collection. "These are mesmerizing in their own right," Abbott says of the items.

The exquisite sense of quality runs through the more than 100 examples of fine and decorative art collected for Lasting Legacies, which include Vienna secessionist porcelain, a painting by Louis Comfort Tiffany, a 1904 Japanese cloisonné vase, and a Zelda Fitzgerald still life.

This quiet expansion of the collection furthers the Garretts' vision of Evergreen as a place for the study and appreciation of art. "We want people to see that there are treasures always coming into the museum," Abbott says. "We don't have an accessions fund, and we really don't often seek to buy major works. For the most part, these are gifts that are offered.

"These [Covarrubias drawings] are added by coincidence," he continues. "Someone said, 'I have Miguel Covarrubias [pieces]; I'd like you to have them.' We didn't seek them out. And what we'd like to do is become more and more of a destination for the study of [Covarrubias'] work."

Lasting Legacies: Recent and Promised Gifts to the Permanent Collection runs through Feb. 23.