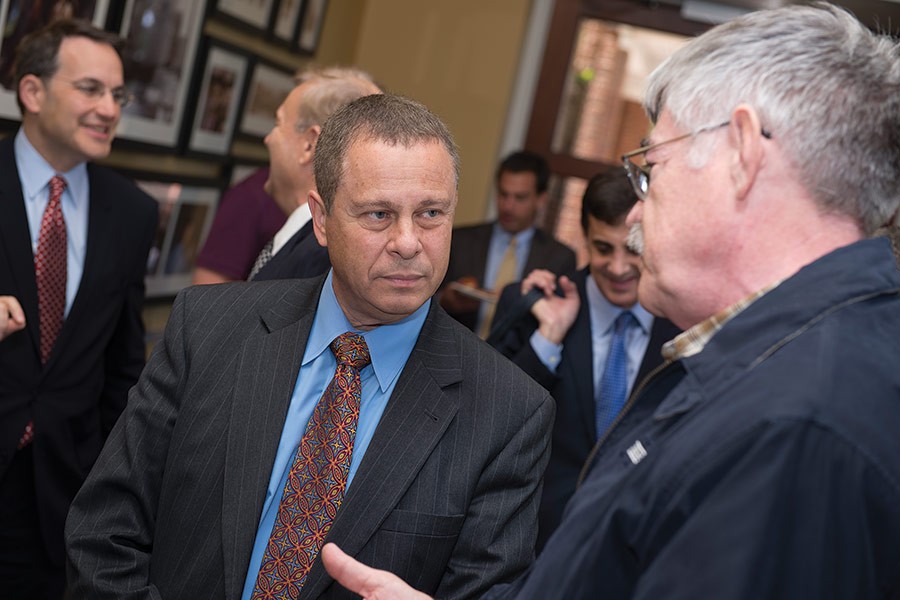 Image caption: T.E. ‘Ed’ Schlesinger, incoming dean of the Whiting School, on an October introductory visit to the Homewood community.

T.E. "Ed" Schlesinger, a distinguished engineering researcher, teacher, and veteran leader of one of the top academic departments in his field, has been appointed dean of Johns Hopkins' Whiting School of Engineering.

Schlesinger is now the David Edward Schramm Memorial Professor at Carnegie Mellon University, where he has been head of the Department of Electrical and Computer Engineering since 2005. He will take up his new position as Benjamin T. Rome Dean of the Whiting School on Jan. 1.

"Ed Schlesinger's record as a researcher, educator, and administrator reflects a tireless commitment to excellence and a genuine passion for engineering and higher education," says Ronald J. Daniels, president of Johns Hopkins.

"I have been struck by his thoughtfulness, drive, and infectious enthusiasm," Daniels says. "His leadership, skills, and vision—to hone a distinctive identity for Johns Hopkins Engineering and to inspire a systems approach to greater collaboration across our schools—will make him a superb dean of the Whiting School."

Schlesinger says he is thrilled to be joining the university.

"When I think of the Whiting School, I think about the next generation of leaders for our society and for our world—students who choose unique paths in education, research, and entrepreneurship, who can work seamlessly across intellectual and geographical boundaries, and who can achieve limitless possibilities," Schlesinger says.

"Johns Hopkins and the Whiting School are without doubt among the finest institutions in the world, and I view this opportunity as a privilege of both leadership and stewardship," he says. "I see my role as enabling Johns Hopkins students and faculty to achieve their goals while sharing a common vision for what it means to be a Hopkins engineer in the 21st century."

Schlesinger has presided over significant growth in Carnegie Mellon's renowned ECE Department, which now has approximately 100 faculty members and an annual budget of more than $50 million. He has fostered research collaborations with top corporations and global programs in Silicon Valley, Portugal, Rwanda, China, Singapore, and India.

Schlesinger also worked with faculty colleagues to define a strategic vision for his department, led a redesign of its undergraduate program, and expanded its graduate studies. He says he plans to take a similarly collaborative approach at Johns Hopkins.

"I am excited to work with faculty, students, staff, and alumni to ensure that the Whiting School continues to enhance the impact of all its programs, to foster collaboration, and to eliminate boundaries or barriers wherever possible," he says. "I also want to ensure that those members of the Whiting School community are recognized for their important contributions to the well-being and improvement of society, locally, nationally, and globally."

As a researcher, Schlesinger has focused on solid-state electronic and optical devices, nanotechnology, and information storage systems. He is a leader in research related to the development of heat-assisted magnetic recording, viewed by many as the next-generation technology for magnetic hard disk drives. He has published more than 250 articles and conference proceedings and holds 12 patents. He established the first GM Collaborative Research Lab at Carnegie Mellon in 2000 and, in 2007, was part of the Carnegie Mellon team whose self-driving SUV won $2 million in a DARPA Grand Challenge sponsored by the Defense Advanced Research Projects Agency. The team's vehicle outperformed 10 rival robot vehicles over a 55-mile course.

Schlesinger earned early career recognition as a Presidential Young Investigator and received an IBM Faculty Development Award. Since then, he has received Carnegie Institute of Technology awards for research and teaching as well as two R&D 100 awards related to technology development. He is a fellow of IEEE, the Institute of Electrical and Electronics Engineers; and SPIE, the international society for optics and photonics.

Schlesinger majored in physics at the University of Toronto, graduating in 1980, and earned his doctorate in applied physics in 1985 at the California Institute of Technology. He joined the Carnegie Mellon faculty later that year.