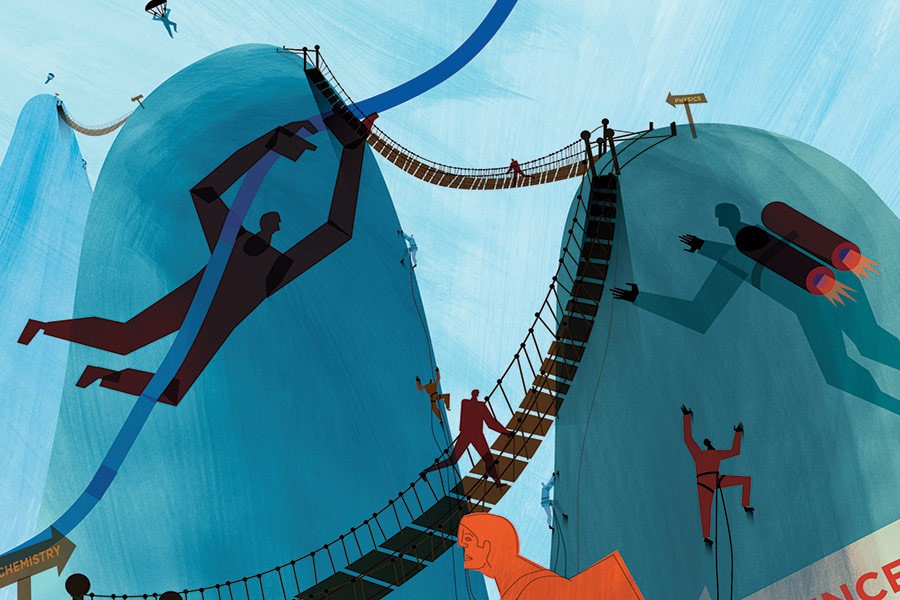 That tedious oratory experience where you and 300 other poor souls gather to take notes, then return home for hours of dreary, solitary homework.

Or, how about this? You watch a few video lectures at home on your laptop, then gather around a table with five classmates to put your newfound knowledge into action. Faculty and student peers help you think through the problems, and you're so engrossed in the conversation that you don't want to leave—even on a Friday afternoon—until every problem is solved.

"You can probably double the rate [that] students learn core ideas if you engage them more actively," explains former Vice Provost Scott Zeger, who in 2011 helped get the university's Gateway Sciences Initiative off the ground to bring fresh, innovative teaching methods to the large, intro-level science classes that so many undergraduate and graduate students take at Johns Hopkins.

That year, the Provost's Office launched the program with a call for faculty proposals and, with $2 million, funded 11 projects, which were recommended by a universitywide faculty committee. Official two-year results will be reported in December, but so far the evidence points to several teaching trends that are improving the student experience: using content that actively engages students, focusing on lab and problem-solving activities, and encouraging peer-to-peer learning.

If someone obeys orders to zap a victim with a painful electric shock, would he obey orders to give a lethal shock instead? Yale psychologist Stanley Milgram asked this research question in the early 1960s, as the trial of German Nazi war criminal Adolf Eichmann was under way. Last year, students at Johns Hopkins read Milgram's paper and worked with his original data set to learn the basic principles of statistics.

Avanti Athreya, one of five professors who teaches Intro to Statistics in the Whiting School of Engineering, says the case study got the students thinking in a whole new way. "It sparked discussion about experimental design and illustrated ways to manipulate data, present data, and interpret conditional probability," she says.

That first year, some students stuck with the traditional statistics class, while others got to try the case-study class. Everyone took the same final exam, and it turned out that students in the case-study course had a slightly better conceptual understanding of the material. That, paired with positive student feedback, was enough for the faculty to adopt the change for all Intro to Statistics classes.

Applied Mathematics and Statistics Department Chair Dan Naiman, who says the course has been taught the same way in the Whiting School since he came to Johns Hopkins 31 years ago, believes that "starting from case studies, reading the original papers, and having students think about it is really the right way to teach stats. This is the future."

Five days before the 2011 spring semester, David Neufeld, a professor of physics in the Krieger School of Arts and Sciences, threw his syllabus out the window.

"He came to us, rather breathless," says Candice Dalrymple, who directs the Sheridan Libraries' Center for Educational Resources. Neufeld had been reading about a new teaching technique called the "flipped classroom" and had just returned from Tufts University, where he saw it in action. The students were so excited and animated, he said, that he had made up his mind: "I'm going to do it myself, starting Tuesday."

The idea is to flip the usual class format: Instead of hearing a lecture in class and working on problems at home, the students listen to a lecture on their own and work on problems with other students in the classroom.

Two semesters later, Neufeld's students were testing better than students in traditional physics classes. When he offered to share his techniques with other faculty members, more than 115 showed up to hear what he had to say.

If You Build It

Later that year, Dalrymple went to the University of Minnesota to look at classrooms specially designed for flipped-classroom learning. She came back determined to create a new collaborative space at Johns Hopkins.

Built with GSI funding, Johns Hopkins' first eStudio is in 309 Krieger Hall and seats 35 students at round tables. The walls are covered nearly floor to ceiling with whiteboard material, projectors show the entire class each team's work, and a robust Internet connection and power supply ("since almost no student I know remembers to charge his laptop," Dalrymple says) keep everyone online.

One Friday, an hour after the afternoon's Single Variable Calculus class was scheduled to wrap up, Dalrymple dropped by the eStudio to clean up for the weekend. "We opened the doors, and there was the class! I said, 'It's 4 p.m. on a Friday. What are you doing here?' And the students said, 'We haven't come to the conclusions!' They were still arguing with each other, drawing arrows all over the place. I was astounded the students were still in a math class and wanted to stay."

The eStudio has been in high demand for classes ranging from engineering to math to organic chemistry; the Physics Department built one of its own, in 478 Bloomberg, with triple the student capacity for its introductory physics course; and the School of Engineering is considering one, too.

"In the future, I think we'll build more," Dalrymple says. "This past summer we had a big meeting, and those in charge of the budget asked, 'Would you welcome being able to convert more of these?' A faculty member said, 'A couple? We need 20.' People are trying to make it happen."

Group learning took off in the Krieger School's Chemistry Department, too, with peer-led team learning. Although the Intro to Chemistry course hasn't changed, students now have an out-of-class learning option.

"In college, science is about discovery and learning for yourself," says Professor Louise Pasternack. "We didn't want to present the students with a person who had all the answers. We wanted them to realize that learning is all about them figuring things out."

Each week, students can meet with a peer leader, a student who has previously done well in the course and has had special training to lead team learning. The leader gives the students a list of problems—but not the answers. Instead, he prompts them with questions to help them discover the solution on their own.

The program started in spring 2012 with 60 students and four peer leaders, and the next semester, Pasternack and her colleague Paul Dagdigian offered the option of peer-led team learning groups to all 550 students who took the course, and 30 percent signed on. That meant hiring a full-time program coordinator, Laura Foster, who has since expanded the program to cover nearly all introductory classes in physics, chemistry, and calculus. Some of last year's peer leaders have taken the initiative to start new peer-led groups for more advanced courses such as organic chemistry and linear algebra, and the departments of Economics and Psychology may launch groups as well.

This year, more than 700 undergraduates are enrolled in at least one peer-led team learning group.

Steven David, vice dean for undergraduate education at the Krieger School, says, "We have 966 students who tried to sign up, but we didn't have enough space for them. Clearly, the students are excited by this. When 1,000 students voluntarily sign up to take more, you're onto something," he says. David co-chairs the GSI faculty committee with Marie Diener-West, chair of the Master of Public Health Program at the Bloomberg School.

In August, the committee recommended a second round of faculty grants; 13 new projects received funding and are now under way.

"We're like venture capitalists, investing in lots of initiatives," David says. "They won't all pan out, but those that do should become a permanent fixture of Johns Hopkins."

Provost Robert Lieberman, who joined the university in July, says that one of the things that attracted him to Johns Hopkins was that it is "in the forefront of innovative science education" and points to the just-opened Undergraduate Teaching Labs as a significant part of that effort. "If you can improve the undergraduate classes in one fell stroke," he says, "you improve the quality of education."

A complete list of the 2011 and 2013 GSI grants is available online at http://web.jhu.edu/administration/provost/initiatives/gsi/grants.