Middle-distance specialist has had a stellar senior season 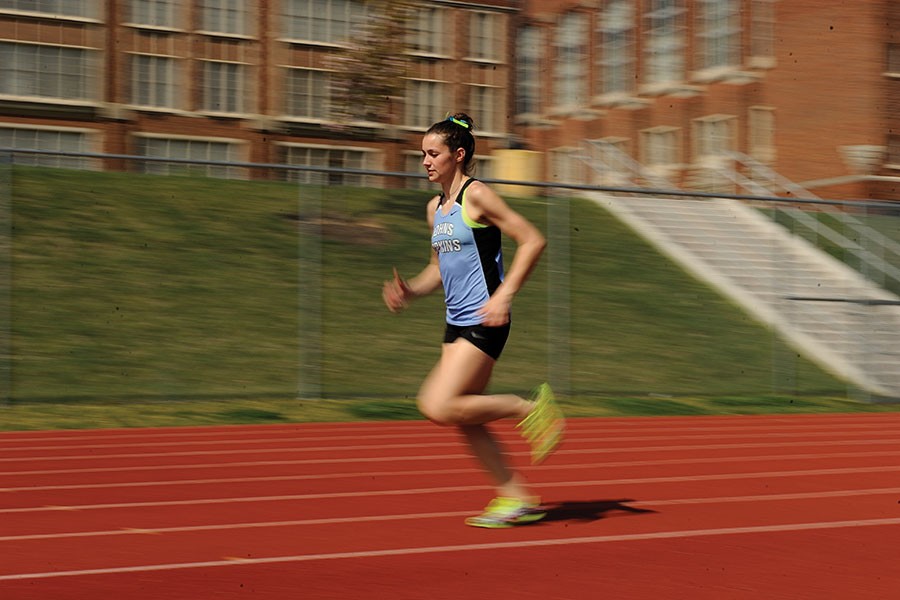 Image caption: Annie Monagle, who specializes in mid-distance races, has had a stellar senior season.

Annie Monagle talks fast. Her sentences build momentum to the point of exhaustion. After a particularly long salvo of words, she often smiles and pauses, somewhat surprised that the conversation's finish line arrived so quickly.

Monagle, a senior co-captain on the university's track and field team, has always had speed and potential. Genetics gave her a slight frame but strong legs. This year, those legs have powered her to the lead pack.

She currently holds the second-fastest time (4:25.49) in the country in the 1500 meters and the fourth-best time (2:10.10) for the 800 meters, and was a key cog in Johns Hopkins' historic victory in the 2013 NCAA Division III National Championship cross-country meet in November in Terre Haute, Ind. The victory was the team's first NCAA title and the first women's national championship in any sport at Johns Hopkins.

Monagle has also earned All-American honors in the distance medley relay and indoor one-mile. At the Penn Relays last month, she helped Johns Hopkins shatter an 11-year-old conference record in the 4x800-meter relay. She entered her senior year, she says, with a newfound purpose and resolve. "I was all in this year," she says. "Just run, I told myself, and enjoy it."

The Rhode Island native also pledged to make up for lost time.

Her injury-plagued running career has not exactly followed a conventional route.

The daughter of a cross-country coach, Monagle started running in high school, where she also played basketball. Her freshman year, she made second team All-State in track and seemed ready to break out.

She started strong her sophomore year, but during a cross-country run felt an odd pain in her lower back. "I was pretty little at the time, and I just thought it was pain from getting tossed around on the basketball court. I didn't give it much mind and continued to run," she says.

Monagle later learned she had a stress fracture in her lumbar spine. She would wear a back brace and do rehab for the next 18 months.

"It killed me not to play sports. My mom didn't even want me to wear a backpack," she says. "I was eventually able to pool run but I hated it. There I was, running in place staring at the wall and getting splashed by little kids."

She returned to racing her senior year, but after only six weeks of indoor track, suffered a fracture in her foot.

When she arrived at Johns Hopkins, Monagle had no firm plans to run but emailed Coach Bobby Van Allen that she was interested in joining the team. Van Allen invited her to join an early-season group run.

"I was totally out of shape at the time compared to everyone else. I think we ran seven to eight miles that day, but it was the most awful workout of my life. I was so slow. When I finished, I wanted to quit. I told myself, I don't belong here."

But a pep talk by then senior Mary O'Grady changed her life.

"She was just unbelievably kind, talking me through my self-doubt," says Monagle, a civil engineering major. "I decided to stick around. That one conversation has stuck with me the four years I've been here. It was a simple act of kindness. I've tried my hardest to emulate that and show understanding and empathy to my teammates."

Monagle made the team her freshman year but got injured again; this time, twin stress fractures in both shins.

Sophomore year involved more physical therapy, but she eventually got back on the track. And each time out got a little faster.

An early highlight came when she made nationals as an alternate, and headed with the team to race in Iowa.

"It was the coolest thing ever," she says. "Nobody cares about track and field, but the nationals is just this huge event. You see fans in body paint and crazy outfits. And it was exciting to run with older girls who were faster than me. It gave me confidence."

Monagle specializes in mid-distance races: 800 meters, 1500 meters, and the mile run. She doesn't have a favorite length but has come to enjoy the 800 meters because it gives her less time to think. "You just go," she says. "Running is such a head game. For me there is a lot of self-doubt. Can I do that pace? Do I belong here?"

Junior year, Monagle ran well in one race, but then something felt wrong. She had trouble lifting her legs during workouts. "They literally felt like they were glued to the ground." She learned she had an iron deficiency, which is not uncommon for runners, and quickly began an iron regimen.

After a break, Monagle retuned to rejoin the team for the indoor track season. Then came an ulcer. She had to be rushed to the hospital one night while on campus. Her doctor told her to limit her activity.

"I pleaded with him to at least let me do yoga, but he said no. Walking to class was about as much as I could do," she says. "I can't stand when I can't run. That's a big part of me, so when it's taken away, I can't accept it."

The time off, however, allowed Monagle's body time to heal. She entered senior year healthy.

Being named the team's co-captain meant a lot to her, and she's taken time to encourage and mentor younger teammates. In particular, she's developed a strong bond with Hannah Oneda, the squad's freshman sensation and one of the top runners in Division III.

Monagle says that Oneda has, in turn, helped her defeat her self-doubt.

"I've always stuck with the idea that I wasn't a good runner and didn't deserve to do well because I didn't put in the miles of some of my teammates, or was hampered because of my injuries," she says. "That is why Hannah is so good for me. She is so disciplined, confident, and fearless. When I start to doubt, she reminds me that I deserve to be here."

Monagle has also been inspired by the book Daring Greatly: How the Courage to Be Vulnerable Transforms the Way We Live, Love, Parent, and Lead by well-known author Brene Brown.

"The book tells you you're never going to be truly 100 percent, but you've got to be ready to go for it," she says. "I remind myself that I've overcome all these injuries to get where I am, and whatever is thrown my way next, although it might stink for a while, I can handle it."

Van Allen, her coach, says, "I don't think she for once thought she was going to be as good as she is. When she got that top time in the 1500, she was like, I'm getting pretty good at this. The race caused her to refocus and reassess her goals."

As of press time, Monagle was set to run her final races of the season in the hopes of qualifying for conference finals and nationals in late May. She also is looking to return to the team next year as she will be enrolled in the master's program in civil engineering and will likely be given an extra year of eligibility because of her injuries.

Her best, she says, is yet to come. 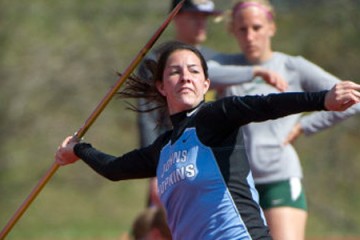