Students' winning book collections, and how they came to be 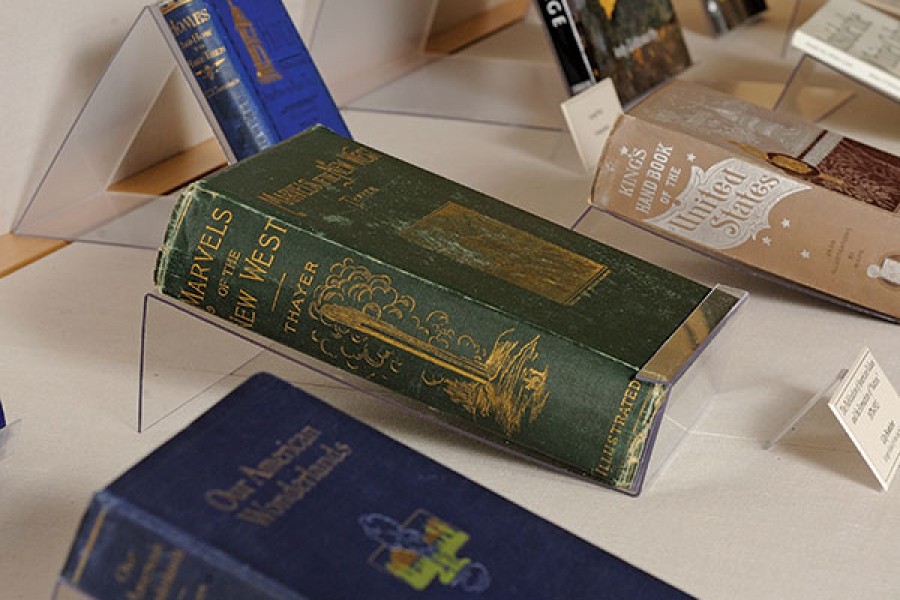 Image caption: Among the selections from the student collections now on display at the MSE Library are Lily Boettchers how-to books from the late 19th and early 20th centuries.

Fourth-year MD/PhD student Elisabet Pujadas was walking down La Rambla thoroughfare in her Barcelona hometown a few summers ago when she came across a plaque dedicated to Santiago Ram&oacute;n y Cajal, the Spanish anatomist who developed the neuron theory of the nervous system that became the bedrock of modern neuroscience. The plaque said that the future Nobel laureate had once walked these same streets, carrying a bucketful of brains. Cajal died in 1934, right before the Spanish Civil War, and under the Franco regime he was held up as a model Spaniard. The best-known book about him, Garc&iacute;a Dur&aacute;n Mu&ntilde;oz's 1948 biography, was written by a friend to the Franco regime, whose point of view shaped how Cajal is known and remembered.

"He was hailed as this icon of the true Spaniard and the person to look up to and very dehumanized," Pujadas says. In the summer between her first and second years of medical school, she started to study Cajal's five years in Barcelona—a research project that snowballed into what she now calls a deconstruction of Cajal—in an effort to extricate the man from the Franco regime's distorting political framework. It's become a lifelong "backburner project" for the epigenetics researcher, and thus far it's produced a library of 36 books and two DVDs by and/or about Cajal, a collection that recently earned Pujadas a $1,000 first-place prize in the graduate category of the 2013 Betty and Edgar Sweren Student Book Collecting Contest sponsored by the Friends of the Johns Hopkins University Libraries.

Launched in 1993 but suspended for a few years before being restarted in 2002, the contest allows students throughout the university the opportunity to showcase what interests them. It's an undertaking seeking not mere book quantity, rarity, or obscurity but intellectual curiosity. Students enter a short essay explaining the collection, a bibliography, and a wish list. And the winners (first and second places in both graduate and undergraduate categories, with two first-place graduate winners this year) for 2013 display a broad range of interests. Examples from each winning entry are on view on the M level of Homewood's MSE Library through July 1.

"I never thought about [my books] as a collection," says Mande Zecca, the other first-place graduate winner, for her From Berkeley to Black Mountain: Avant-Garde American Poetry, 1945–1965 collection that grew out of her interest in the poet Jack Spicer. Zecca says she started collecting Spicer because his books were out of print and she couldn't find out anything about his work except "from going to actual archives and looking at Spicer's letters, which now I will be able to do."

Joseph Shaikewitz, the second-place finisher in the undergraduate category for How Do You Spell Contemporary? Defining, Discovering, and Displaying Today's Art World, started his collection to help him figure out how he wants to pursue a curating career. His collection includes artists' monographs and curatorial-studies books. "It's just interesting [how many disciplines] can combine into one practice," he says, noting that presenting art involves the intersection of art history and a broad range of cultural literacy and history as well. Curatorial studies is "an interesting discipline where you're not saying, This is what you do, but you're saying, These are approaches to this work and how it intersects art history and other things."

And in the case of undergraduate first-place winner Lily Boettcher, The Publication of American Values and the Formation of 'Nation,' 1870–1915 offers a window into understanding how we think about who we are right now. It's a collection of late-19th- and early-20th-century "how-to" books—from voting guides to sports rulebooks to maps—that offers pragmatic advice in ways that make them function as cultural assimilation primers, informing and shaping the version we have today of American westward expansion. A number of these books deliver "this idea of creating a better self to contribute to a stronger nation," Boettcher says, noting that a handbook to the United States from the 1880s includes a home-buying section and dispenses its advice almost as aspirational goals, saying that self-sufficient people of character will thrive out west.

"The idea of 'home' was very important to westward expansion," she says. "People wanted to escape to a place where they romanticized where they could start a new life."

It's a fascinating observation: how the myths of manifest destiny were planted in the guidebooks that people may have used to make their way east to west. "I don't think you can ever really extricate yourself from a historical context, which is a great thing," Boettcher says. "It reminds you of what you're doing today and the problems from 150 years ago."